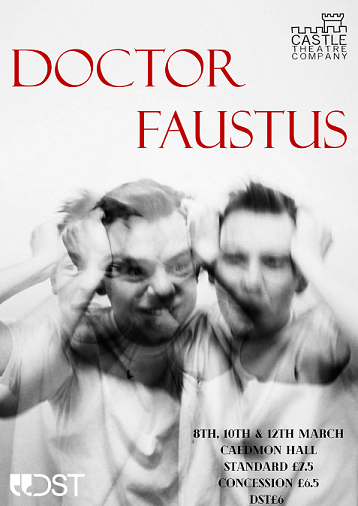 The Castle Theatre Company presents a production of Christopher Marlowe’s monumental work (and first year English Lit core text!) Doctor Faustus, a play centred on a man of academic intellect, searching for knowledge, power and pleasure at the cost of his soul.

The stage is brought to floor level, direct to an audience seated in a horseshoe around a simple mattress strewn with leather bound books, yellowing papers and iron lanterns. An ambience of quietly disconcerting piano music and an inconspicuous throbbing hum are used effectively to enhance the tension of characters’ silent actions on stage. A few warm spotlights were utilised sporadically, and slightly less successfully, in attempts to draw dramatic attention to the Good Angel and Bad Angel’s conversations. Overall, the floor was used well for a space that isn’t specifically designed as a stage, with credit due to Stage Manager Emily Lipscombe and her team for smooth set changes.

The directorial team, Emily Browning, Alicia Taylor, and Ansh Bhatnagar, have been bold in their approaches to modernising this renaissance work into something more palatable and engaging for the audience. A lab coat clad chorus surround the frantically scribbling Dr Faustus, Ben Lewis, ominously cool and direct with their lines predestining Faustus’ fate. The creative vision of a psychoanalytic approach could have been more explicit throughout, however, rather than relying on lab coats and suits to imply to the audience a possible setting of a psychiatric ward. The second half, and particularly final scenes of the play, succeeded far better in a more serious depiction of Faustus’ psychological degradation into fitful and fearful madness at the dawning realisation of the consequences of his actions.

Ben Lewis’ Faustus exudes a boyish energy, jumping between a floor of books in his pyjamas which on first impression strongly resembles a frantic late night study session, briming with academic whims, indecision, and a flippant excitement that holds no malicious intent or serious consideration. This high energy approach makes for engaging and endearing watching, particularly in relation to Bhav Amar’s prowling Mephistopheles. The dynamic between these two is impeccable. Amar’s expressive eye contact speaks volumes, condescending, warning, tempting and despairing. The interplay at points feels like an exasperated babysitter answering the insatiable questions and wants of a precocious child. Such playfulness is a novel direction of scenes which hold great psychological and theological weight, which is disarming and ultimately damning.

If the protagonists’ storyline is treated with a light touch, the comedic subplot of Wagner and Robin is even more impishly absurd. Millie Adams as a mischievous Wagner toys with the lascivious Robin, played by Sylvie Norman-Taylor, with ease and clear control of the stage. Both maintain a vibrant physicality while delivering slick lines, summoning a chaos of giggling cowboy hat wearing demons, and mirroring the more serious actions of Mephistopheles and Faustus. While their dynamic scenes were great fun to watch, they did feel somewhat separate and overlooked in the psychoanalytic vision of the rest of the play.

The real highlight of the entire energetic piece is the ending crescendo which is given far more sincerity. Stephen Ledger’s manipulative Bad Angel/Lucifer figure looms throughout, in dispute with a heart wrenching performance by Daisy Mitchell as the desperately encouraging and pleading Good Angel. Questions of destiny, free will, forgiveness and cost culminate magnificently in a forceful ending, overwhelming the audience with Faustus’ tragic realisation of consequences, just too late.

This is a highly enjoyable production to watch, treated with unexpected light heartedness and energetic enthusiasm that is certainly a different approach, matched in the song choice of ‘Highway to Hell’ for bows, bizarre, and disconcertingly funny.

‘Doctor Faustus’ is playing at Caedmon Hall until 12th March