Dennis Kelly’s DNA follows the story of a group of teenagers who attempt to cover up a death and in the process accidentally framing an innocent man. This exploration of moral consequences, and the complex feelings and interpersonal relationships of adolescence was brought into the intimate and carefully constructed space at Mark Hillery Arts Centre. The attempt at unconventional staging decisions to create this space of tension was commendable, although the execution and development of the play left plenty of room for improvement.

The first thing that struck the audience upon entering the theatre is the pentagonal stage, demarcated and enclosed by rows of audience seats facing five directions. On the stage, wooden crates, logs, a supermarket trolley and a bench were spread out. 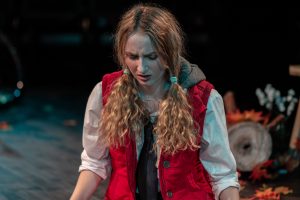 Autumn leaves were scattered and twined around them, and on the canopy. As the house lights dim, the audience is kept in suspense as the location from which the actors would emerge was unknown. Throughout the play, actors entered and exited through the different spaces between rows of seats. This complemented the episodic nature of the script, which cut from dialogue to dialogue, alternating between the revelation of new information by Louise Lovatt’s Jan and Martin Docherty’s Mark, tense scenes as the group struggled to face their predicament, and casual conversations between Alexi Baramidze’s Phil and Aimie Page’s Leah.

In addition to varied entrances and exits, the pentagonal stage allowed interesting blockings where characters could face more directions than a four-sided black box. This reflected the complexity of the group’s dynamics and multifaceted nature of their struggle, as the watchful eyes from all directions reminded one of peer pressure or a moral conscience, to which characters presented fabricated appearances. However, the unconventional staging also had its challenges – I was often unable to see actors as they were either facing away, or being blocked by the many actors who crowd the stage. This blocked out a lot of emotion and tension that could have been better displayed.

Nevertheless, the blockings of actors often successfully enhanced the presentation of power dynamics and indecision. For example, Dylan Hicks as John Tate, Harry Stanbury as Danny and Sam Coupler as Richard anxiously paced on the spot in a triangle as they grappled with the recurring theme of death and the possibility of agency. Hicks tried to assert authority and impose his will on Danny and Richard to take sides, alternating between moving towards either of them repeatedly, infringing on their space. The struggle for leadership is simultaneously undermined by their jittery movements, and this anxiety highlighted most of the group’s inability to take action throughout. Other notable scenes include when Baramidze later took 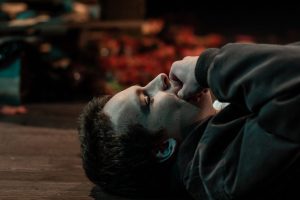 centre stage, pacing in assured steps as he laid out his plan without much display of emotion, while the rest appeared paralysed around him, much like the way they passively accepted his moral (or immoral) leadership. The play’s cyclical plot structure and the characters’ apparent entrapment was depicted through repetitive blockings – such as the scenes with Baramidze and Page – though I wondered why Leah’s “déjà vu” scene used different positions from previous similar scenes.

While there was evident effort to convey emotions and conflicts through the actors’ physicality and movement, the play as a whole seemed unable to match its script in dramatic tension. In general, the depiction of characters in the play was not as nuanced as the themes demanded. Some reliance on stereotypical actions that demonstrate anxiety lost its effect after a while, although Stanbury managed to earn a few laughs with the repetitiveness of his selfish concerns. As more complications emerged, the characters seemed to be desensitized into inaction, but the resulting noticeable drop in energy felt anticlimactic. The scene transitions also felt jarring at times, without much leading up to the characters’ sudden changes in disposition.

Aimie Page was consistent as the bubbly, awkward teenage girl. Her attempts to elicit attention from Phil and her role as the moral conscience of the group drew sympathy. However, I found the constant stammering rhythm and high-pitched exclamations throughout stifled character development, perhaps resulting in an unchanging emotional state that conveyed a lack of empathy similar to Phil. Her speech and actions in his presence sometimes did not feel like admiration directed at him, but rather self-absorption. The threats to strangle herself and to leave also felt unconvincing as emotional transitions were absent. On the bright side, this contributed to the air of unreality of her interactions with Phil, whose unhuman and psychopathic tendencies were well portrayed by Baramidze. The strong energy and focus from Baramidze’s Phil and Orla McElroy as Cathy managed to hold some tension in a play which was losing its intensity with slow pacing and incohesive scenes.

For a play largely comprised of freshers, DNA is commendable for its interesting approach to space and blocking, which suit the themes of teenage friendships, power, morality and agency well. Despite some shortcomings, the commitment of the cast and production team is valuable, and I look forward to more experimentation and depth in future productions.

DNA will be playing in the Mark Hillery Arts Centre on Friday 23rd and Saturday 24th November at 7:30pm.