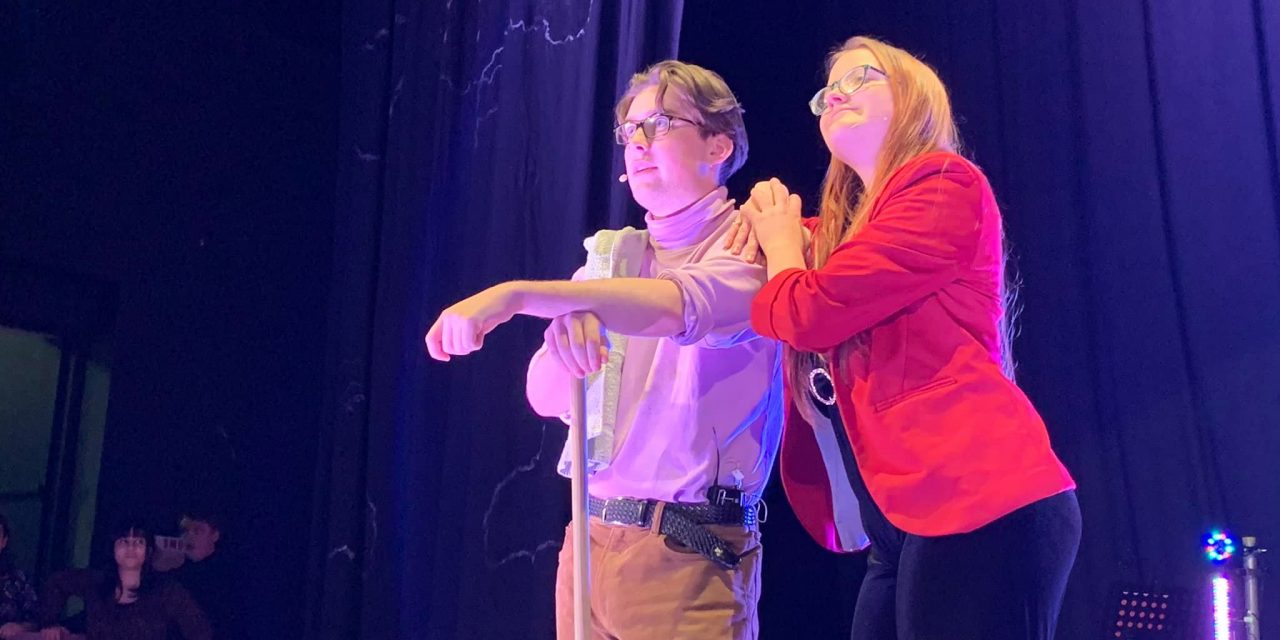 Combining the plot of Dr Faustus with music from the 1970s disco era is frankly a bizarre concept for a musical. Whilst the talented cast of Hild Bede Theatre’s Disco Inferno worked hard to create what succeeded at being a vibrant and upbeat evening for their audience, the production was lacklustre at times.

The musical follows Jack (Alex Comaish), an aspiring musician who trades his soul for a life of fame and fortune, only to realise that in doing so he neglects the people who are most important to him, consequently losing his loyal girlfriend Jane (Lily Ashley). The lighting and costume design, using multicoloured LED strips and a disco ball as well as numerous pairs of flares, immediately transported the audience into the world of Disco Inferno, the 70s nightclub Jack works at. The same effort was not put into the props and set, resulting in some amusing yet amateurish visuals such as when a piece of tin foil fell off a clearly homemade trophy, and when ‘Jimmy Allen’ was seen written in sharpie on a cardboard gravestone.

Despite these shortcomings, some performances were excellent. Alex Comaish’s Jack radiates coolness, and even when his character verges on becoming unlikeable, Lauren Brewer’s direction enables him to successfully maintain the audience’s care. At times Comaish’s naturalism was slightly understated for the high energy required by such a musical, however this created a distinguishable progression as his character grew in confidence alongside his acting. I was particularly entertained by the comical and endearing performance of Ben Stoneley as Tom, Jack’s closest friend. From his first standout moment in the musical number ‘Kissin’ In The Back Row of The Movies’, Stoneley convincingly portrayed the role of an awkward young man, desperately keen to kiss his girlfriend of six years, with an infectious energy. Equally impressive was the effortlessly nuanced performance of Isabella Thompson as Kathy, Jack’s ex-girlfriend, as she exhibits both anguish and tenderness with remarkable attention to detail. The director, Lauren Brewer, clearly worked intimately with the actors, however more time should have been spent doing the same with transitions, which were often abrupt and messy and consequently interrupted the flow that was created in the scenes.

Siobhan Gardiner should be greatly commended, taking on the feat of choreographing such a dance-heavy production. Her choreography was consistently dynamic and energetic, using recognisable timely moves which contributed to the sense of familiarity which underpinned the jukebox musical. The dance ensemble, whilst committed in their performance, significantly ranged in technical ability, which meant that often the execution of more advanced moves became messy and out of time. They also frequently distracted from some rather poignant solo or duet moments, where the vocalists were placed at the back of the stage behind the dancers, which left the audience unable to see them. Regardless, I was entertained by the performers’ enthusiasm, notably in the closing number ‘Disco Inferno’ where they seemed most at ease, dancing between the seats and confidently interacting with the audience.

The onstage band, led by Katie Foster, were stellar and perhaps the most consistent part of the show, giving a concert-like atmosphere from the start of the overture. They were sadly let down by the weak ensemble singing, with more vocal entrances being late than not. That is not to say that the vocal talent of the show was limited, for many of the solo performances, particularly from the female leads, were astounding. It goes unsaid that Lily Ashley’s performance of ‘I Will Survive’ was the highlight of the night, as she owned the stage with an effortlessly strong belt. I would have liked to see Ashley alone on stage for more of this song, as her admirable stage presence meant that she massively overshadowed the dance ensemble.  Impressive vocals also came from Libby Crombie’s as Maggie in ‘This Is It’ and Olivia Jones as Lady Marmalade in ‘Hot Stuff’, who both commanded the stage. Despite some technical difficulties at moments and a few of the songs being a little out of his range, Comaish held his own in his vocal solos, improving as the show went on, with his riffs in ‘Boogie Wonderland’ being particularly excellent.

Whilst Hild Bede Theatre’s production of Disco Inferno was a little rough around the edges, it is clear just how much the cast are enjoying themselves regardless of its unconvincing plot line. Overall, Disco Inferno certainly provides an entertaining night of hit songs to get the audience’s toes tapping.

Disco Inferno will play in Caedmon Hall, the College of St Hild and St Bede, on the 21ist and 22nd February.