Starting life as Das Gefängis (or ‘The Prison’) before being scored by Johann Strauss II to a German libretto by Karl Haffner and Richard Genée to become the light opera Die Fledermaus (‘The Revenge of the Bat’), finally comes the turn of the Durham Opera Ensemble (DOE) to present us their rendition of the much-loved operetta. What follows is frivolity, infidelity and falsehood in a comedy that proves, ultimately, that all’s well that ends well.

The overwhelming qualities of the performance are its professionalism and consistency. Musical director, and conductor, Harry Lai governs an outstanding orchestra comprising strings, brass and percussion to bring Strauss II’s score to life. Not a single note is out of place and the resounding effect is a swathe of sound, and a veritable cacophony, which propels the opera 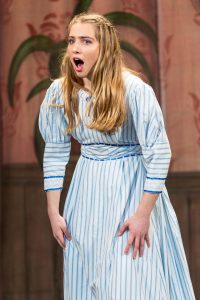 to a steady pace thus ensuring that there is never a dip in the action or narrative, and certainly never a dull moment. In a sense, the music becomes its own character and cast-member with the ultimately overarching starring role.

Working synergistically alongside the orchestra are the incredible vocals; the music and sung lyrical numbers serve as accessories to each other. The lyric and music are highly complementary, and the score seems to elevate the fantastic lyrical performances, rather than serving to overshadow, or otherwise smother, them. All of the vocal performances throughout are powerful and unrelenting in their prowess, with additionally brilliant projection –Poppy Metherell’s (Rosalinde) veritably angelic vocals are deserving of special commendation and recognition. Throughout, there is consistently lovely harmonisation which is facilitated by the fantastically stellar chorus, all of which is enough to convince the audience to agree with the sentiment from one of the opera’s lines; “it’s always the right time for a song”.

The theme of professionalism is maintained throughout the rest of the performance; all of the onstage performers convey their roles with charisma and are distinctly likeable. The unlikely blossoming “bromance” between Gabriel Von Eisenstein (Max Halcox) and prison governor Frank (Cameron Gergett) is owing of a particular mention. Their interaction is easy, and believable, thus ensuring that the comedy brought about through their absurdity lands. Both performers have an excellent sense of comedy, and comedic timing, and are able to convey this through both facial expressions and physical comedy. Notably, Cameron Gergett is exceptional during the side-splitting opening scene to the operetta’s third act.

DOE’s rendition of Die Fledermaus remains slick and seamless, and even its technical aspects are without hitch or limitation. The performance benefits from highly dynamic staging and a multi-faceted set which changes with each major act. The set is highly embellished and realistic, all of which is further elevated and adorned by the period-typical costumes which are particularly outstanding. The most impressive of these sets is the ‘Ballroom at Prince Orlofsky’s Villa’ which features a grand 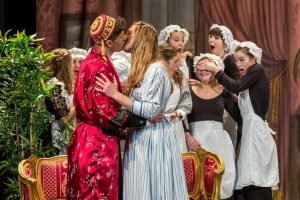 staircase decorated with a lush purple carpet –this serves to highlight the production team’s attention to detail by which the colour purple is intrinsically associated with those of blue-blood.

Technical director Josh Gordon, and assistant technical director Sarah Panek, no doubt contributed largely to the seamless technical transitions throughout the performance. Of note is the effective and professional use of lighting; the dimming of the lights to place a sole beam of focus on the dominant vocalist during their lyrical ‘asides’ to the audience was utilised to particular effect. Director Tom Hartley should also be credited for crafting an engaging and highly professional portrayal of the revered opera.

DOE has been able to mold an utterly captivating interpretation of Die Fledermaus and succeeds in enthralling throughout, despite its lengthy run-time. All in all, DOE’s Die Fledermaus serves as a riveting and astoundingly bewitching “night at the opera”.