REVIEW: Death to the Afterlife

Emily Winters is intrigued by the premise of Wrong Tree Theatre’s ‘Death to the Afterlife’.

Wrong Tree Theatre’s Death to the Afterlife was, sweet, funny, emotional, and unambitious.

Fabio’s proved to be a surprisingly effective performance space, allowing close proximity to the audience, though a local in the front row complained to me about the virtually non-existent houselights making it dangerous for disabled accessibility, a very fair point, although the relocation of the play to the Birley Room in Hatfield College should solve this issue for the rest of the run.

The underscore was very simple, with electronic sounds used throughout, but a lack of melodic material meant it had little meaning or emotional value, relying on the play for context, and felt very easy-listening, and easy to tune out. It becomes particularly monotonous after an entire show of it. There was also a frustrating lack of harmonic variation, development or complexity for what could have been an interesting score.

There were several technical issues throughout the play, which are sure to be solved in post-performance notes, mostly stemming from the projector, which was clearly linked to someone’s Mac and occasionally showed the user adjusting brightness and opening files of video links. The placement of the projector was also slightly wonky which made it hard to read some of the text. There were also several minor costuming issues that can prove very distracting in such an intimate 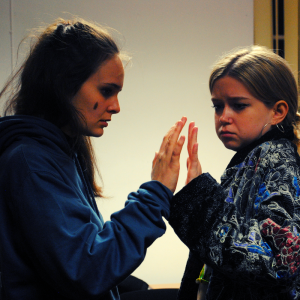 performance space. Inside-out shirts, and shoes with a broken zips are easily fixable but when such issues appear repeatedly it’s very noticeable. The mother’s costume was also problematic, as the very makeshift white sheet with a hole in it and gauze was rather comic when it first entered, looking rather like a child’s nativity costume, and it is only through the superb and sinister movement of Hannah Filmore that rebuilt the tension.

Now the ensemble were the strongest part of the show, particularly Filmore who had consistently excellent comic timing, yet proved versatile, and capable of very skilful subtleties.  Tom Salter, despite there being a lack of variation between his characters ‘Angie’s dad’ and ‘Henry’, had similarly excellent comic and sentimental phases throughout. Carlotta Meyer was also strong, but at times her characters felt a little shoe-horned in, particularly the mad scientist who seems to have crept in through a ‘what kind of people do you think would be in the afterlife’ kind of brainstorming session and little consideration for a narrative. Lowri Mathias’s ‘Kaia’ felt a little shallow, being a condescending at times, and over-explaining plot to the audience, but the actress was capable of maintaining a sweet and funny, though somewhat vanilla personality. There was a somewhat bizarre message in her character arc that grief and overcoming it somehow makes you better at giving career advice than everyone else.

I’ll admit to being deeply disappointed that the university students, through hours of devising and creative exploration, went on to portray… university students, and the ending ‘message to friends’ monologue felt very preachy, as she had come to no self-realisation or development throughout her journey other than feeling she should tell her friends they were wrong about their life choices. It was unimaginative and leads to every character having only one conflict, interest or trait, including the lead Kaia, who, save for the opening monologue did not mention her father once, despite him ‘doing all the things a mum should’ and being her only mentioned family member. It was curious that he was not worthy of a mention, when a few friends

from school- two of whom she didn’t seem particularly close to- were. It was incredibly disappointing that not one character in the entire show had more than one motivation.

Devised theatre has its days, but sadly this was not one of them. An excellent concept, and an excellent cast were swayed by a criminal lack of imagination. Whilst it was a highly enjoyable performance, and the ambiguous ending was the right decision, it felt messy, and the narrative felt very Durham-centric, focusing on gap yahs and business degrees, it feels like there is too much exploration of university culture to allow much exploration of the afterlife. Yet Death to the Afterlife was sentimental and meaningful. It was funny in places without losing tension, though suffered initial pacing issues. The choral movement was beautiful and cohesive, so it would’ve been nice to see more of this. It was a highly enjoyable time, but any longer would have been a little wearing, and I was very glad my ticket was free. I feel like a superb set of actors were somewhat let down by their play.

Death to the Afterlife will be playing in the Birley Room in Hatfield College at 8pm on Saturday 16th and Sunday 17th March.