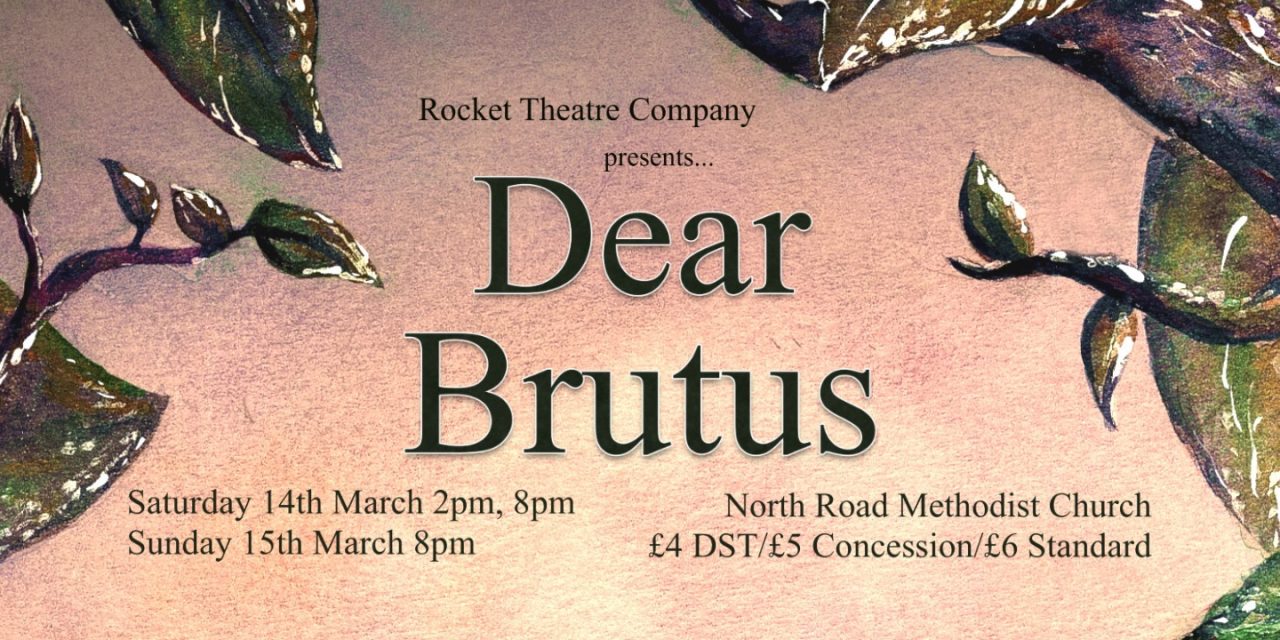 Dear Brutus tells the story of an Edwardian dinner party during which (almost) each guest ventures into a magical forest in search of a second chance. Rocket Theatre Company has put together this enjoyable yet introspective piece of theatre, that I am very happy I got the chance to watch.

Director Eleanor Thornton and assistant director Jennifer Leigh have done a great job bringing this piece to life. The emotional development of the whole piece was very clear from act to act, making the climax at the end very powerful. Producer Monica Jones and assistant producer Siobhan Gardiner should also be applauded for bringing all aspects of the play together as all elements complemented each other nicely and everything had a certain aesthetic and atmosphere to it.

North Road Methodist Church was a wonderful venue choice for the production. Its simplicity and bareness acted as a canvas on which the production team were able to create the settings of both an Edwardian home and a magical forest. I particularly liked the ivy and fairy lights which hung down at the back of the stage during Act Two, which created the illusion of trees with magic running through them.

The co-technical directors Ella Al-Khalil Coyle and Lauren Billet also brought colour into Act Two with the use of green and blue lighting which looked spectacular along with the glimmering of the fairy lights. I also really liked the use of projection of tree silhouettes which was used in this act.

The dreamlike lighting state of Act 2 also greatly contrasted the warmth and realism of Acts 1 and 3, highlighting the switch from real-life to the magic land of the forest. Although part of me wanted the lighting to be more experimental and changing, I appreciate that sometimes less is more, and the choices made definitely worked very well. Overall, ‘Dear Brutus’ was beautiful to look at, from Jennifer Leigh’s elaborate poster, to the silky dresses worn by the cast to the fairy lights all over the room.

The acting throughout was very good. I very much loved William Dodd’s portrayal of Will Dearth, a melancholic artist in a struggling marriage who becomes a troubled, yet loving, father in the forest. Dodd showed a great range in his acting and everything from his stance to his facial expressions were very well thought-out. He played the role with a beautiful subtlety which worked tremendously well in the intimate space and his scene with his daughter, Margaret (Tabitha Wilson) was very touching and I found myself getting teary eyed. It was definitely one of the highlights of the show.

Eleanor Kris’s Lob was also truly remarkable. Kris brought a brilliantly mischievous energy to her performance of the mysterious all-knowing Lob, which was reminiscent of Gene Wilder’s Willy Wonka, and I was instantly drawn to it. I do wish she had more time on stage, but every moment she was on was thoroughly entertaining. Even when doing nothing but sleeping in an arm chair or cheekily smirking at the audience, Kris had an undeniable presence.

Overall, the acting was strong and I want to congratulate each cast member on their respective performances. Perhaps the acoustics of the church were not great, which caused some of the lines to be thrown away. However, this did not detract from the performance. At times the pace started to lag, particularly in Act 1, but the few times this did happen the cast worked together and brought it back up to speed, so it was barely noticeable. Each actor brought unique characters to life with very distinct personalities. Everyone had their own time to shine and each cast member took full advantage of this.

Dear Brutus was a very sweet and engaging production. It is obvious that a lot of love and hard work went into it and I found myself smiling throughout most of it, apart from when I was getting teary eyed. I highly recommend this play as it was a great source of escapism, which I think is very much needed right now.