Review: DDF – The House of Influenza

Charlie Norton is blown away by Andrew Shires’ one-woman comedy. 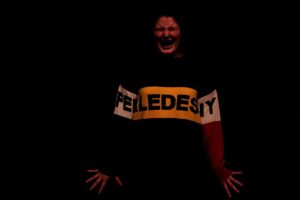 Though I am hesitant to open with a sweeping statement, The House of Influenza: A Spooky Tale of Frighteningness is the single best show I have seen in my time at Durham. Andrew Shires’ expertly crafted metadrama explores the concept of ‘horror’ in both its thematic and its emotional capacities, delivering a fiercely funny parody of the genre, whilst embedding the comedic ‘spooky tale’ in a poignant frame narrative.

It is difficult to explain the plot of Influenza without giving too much away. The comedy depends somewhat on Shires’ ability to uphold horror tropes (think creepy twins and unexplained whispers) and then subvert them with an unexpected twist. The play opens with a character, listed in the programme only as ‘Actor’, who finds herself bizarrely and immediately confronted with both an audience and an apocalypse. Prompted by her growing fear of the zombies standing on her front lawn, Actor realises that her situation of real terror is the perfect environment in which to create the most ridiculous horror story possible, and so the embedded plot begins. What follows is a hysterically funny self-referential pastiche of several horror classics from Children of the Corn to Saw. However, though this overview might paint Influenza as another addition to the laborious Scary Movie series, the impeccable ebb and flow of the riotously funny embedded narrative and the poignant frame of the apocalypse maintains the pace of the production brilliantly.

Despite my initial reservations about director Elliot Burford’s decision to leave the primitive black-box setting of Caedmon Hall completely unembellished, any worries were rapidly dispelled. Instead of depending upon props, Burford utilises the entire stage through creative blocking, thus allowing the audience to be engulfed by each of the richly imagined settings of the action, rather than focusing the audience’s attention on props. Another unexpected element of the play was the incorporation of a romantic ballad about foul-mouthed ‘Colin the Knight’. As musical director, Rhys Rodrigues provided a simple melody which enabled the lyrics to be communicated to the audience to great comic effect. Both Burford and assistant director Charlotte Phipps must be commended for their masterful handling of a demanding script.

However, despite the genius of the script and the evident directorial talent, the physical entity of the play is ultimately a one-woman show. To command and uphold the attention of an entire audience for almost an hour with no other cast-members to fall back on must be a truly daunting prospect, but Lily Edwards faces up to the task unflinchingly. Throughout the play, Edwards portrays almost a dozen characters, ranging from the ridiculously caricatured jock Brad to the pompous yet threatening Miss Grimelthwaite Shinfeather, with equal commitment and veracity. To put it simply, Edwards is a very funny lady. This truly exceptional aptitude for comedy is evident through her adept differentiation between the characters through vivacious physicality and facial expression. A very minor criticism would be of the occasional blurring of the characters Gillian and Danny, particularly in the library scene where it was not immediately obvious who was who. However, this did not detract from the overall effect – indeed, Edwards had the audience in roars of laughter, depicting hilariously exaggerated characters such as the tragically naïve ‘slutty’ Haley with perfect comic timing.

For me, despite laughing at the farcical scenes until I thought I had developed abs, the real triumph of Influenza is in the emotional grounding given to the piece by the frame narrative. As a true horror fanatic, I was initially hesitant to join in with what I assumed would be a mockery of the genre and its history. However, Shires’ intelligent script picks up on the relevance and validity of horror by crafting it as a means of escapism for the isolated narrator. Edwards also shows that she is a truly diverse talent as she manages to switch instantaneously from moments of hysterical comedy to tender dramatic monologues. The transition between the two distinct elements of the play is clearly marked by the decision to keep the lights off for the majority of the frame narrative, leaving the audience dependent on the sentiment and delivery of the script. In this way, the minimal tech was highly effective. However, it was slightly awkward that of only a handful of sound cues, the most important one went wrong. Edwards handled this brilliantly through self-reference, though, so the issue was quickly forgotten. The play brilliantly ends with a blackout, and comes full-circle in a satisfying way that is rarely achieved in student written theatre.

In all honesty, words do not do the intricate successes of this production justice. All that leaves me to say, then, is a big congratulations to the individuals who created such an enjoyable and oddly resounding show – the standing ovation was very much deserved. I implore anyone reading this to go and see The House of Influenza: A Spooky Tale of Frighteningness: you will not be disappointed.

The House of Influenza will be playing on the 10th February as part of DDF’s Black Box line-up in Caedmon Hall, The College of St. Hild and St. Bede, starting at 7:30pm.