Owen Sparkes is extremely impressed by this scientific play. 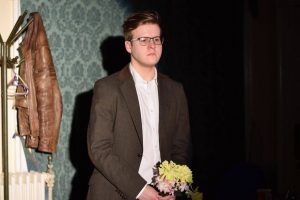 I try to avoid laziness in using hyperbolic language, but allow me to indulge myself, just this once, in the case of The Empiricist: I loved this play. It was beautifully written and excellently executed; everyone involved in the all-too brief production ought to be very pleased with themselves. The Empiricist is a gem of a play, providing a premise that ought to be very dull, but instead turning it into an excellent examination of fraught friendships and truth-seeking. The story of two scientists, Pavlov and Werner, faced with dilemma, upset, and the comedy of life, pitted the enlightened against the romantic, the eccentric against the pragmatic. It was very well done.

On entering Chad’s Horsfall Room, the audience were met with a successfully-formed set, with every prop serving its own purpose. We were presented with a realistic setting that lay the foundation for a very realistic production. The director, Jake Hathaway, and the rest of the production team should be proud of the world they created. There is always a danger with excessive props that they will be detrimental to the pace of the story – fortunately this was not the case. The lighting, while simple, worked a treat in differentiating the varying parts of the play. Although there were some slight issues with technical aspects, such as a late ringing of the phone, these were only slightly problematic and the cast navigated them well. The small size of the Horsfall Room served to heighten the intensity that the play needed, and although its opulent curtains and chandeliers sometimes distracted, the space was more beneficial than not. 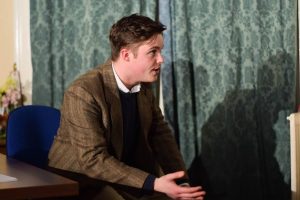 The performances were refreshingly honest and the chemistry between the two actors onstage met the demands this play required. Hathaway’s casting and direction is to be praised here; both actors slipped into the characterisation of two nerdy scientists all too well. John Broadhead’s performance of Werner was slick; he showed emotional maturity in a text that demanded a wide range of feeling. Although at times I was left wishing slightly that some depth in the character was further explored, this is only a slight niggle, and on the whole his performance was polished. Lewis Russell’s characterisation of Pavlov met Broadhead with equal aplomb, as the near-conspiracist scientist desperate to live in a universe of singular truths. Both performances were highly believable, and most appreciated was their ability to utilise pauses; these were not uncomfortable, but both actors made the audience feel sure of what they were watching.

Finally, to the writing: Caspar Bayliss shows exceptional promise as a playwright if The Empiricist is anything to go by. I could not conceive, before I entered, how I was supposed to care particularly about the premise of the play; two cocky geniuses sat in a room arguing about the finer points of subjective truth does not scream enjoyment. How wrong I was. While some of the text was clunky and once or twice relied on clichés, this is to be expected in a production limited to around forty-five minutes, and all of this paled in comparison to the successes of the script, based on a true story of scientific discovery (and failure). The characters were well-developed, the dialogue rich and believable, and the story covered an unbelievable amount of ground and emotion without biting off more than it could chew. It was a script very comfortable in itself; most enjoyable was how each character, clearly well-defined in the text, was so supportive of the other. This play was a pleasure to watch for so many reasons; Bayliss should be very proud of what he created, and I look forward to seeing what his writing produces in the future.