Review: DDF – The Adventures of Slick Tuffman: A Noir Comedy 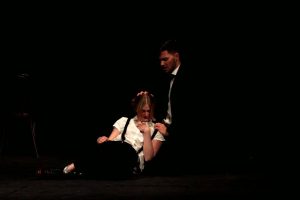 “What in the name of M. Night Shyamalan?” Detective Slick Tuffman cries towards the play’s climax. It feels like a fitting statement. On face value, The Adventures of Slick Tuffman: A Noir Comedy is a stereotypical story about a renegade cop with nothing to lose, and is even set in 1930s New York to boot. However, almost as instantly as the action begins, it is clear that this play is far from ordinary, and is the precise opposite of stereotypical; it is a twist worthy of director Shyamalan himself.

The Adventures of Slick Tuffman personifies itself as a satire; it is a schtick poking fun at the very genre, and source material, that it draws from, and it does this in hilariously creative ways. The play takes every cliché and runs with it; mocking and self-aware with every step, it effortlessly distinguishes itself as something different, and something extremely far from the norm. There was never a dull moment, the laughs were aplenty, and there was hardly time to breathe between one joke and the next. The humour was conveyed flawlessly, and each caper was deliciously comical.

Consider each trope associated with the time period and genre, consider each cliché of theatre, and consider each convention of cinema: you’ll find them all here. However, these tropes are manipulated in such a way as to make the play original. Each line of dialogue and each set piece was laden with comments about the lack of originality in modern cinema. Be it the asides delivered to the audience by Slick, or the use of slow-motion, blackouts, and ‘thought-exposing monologues’, it is clear that, through his script, Mike Bedigan sought to reveal his innermost thoughts about these mediums. It is true that the writing truly leaps from the page, especially important given the otherwise minimalistic staging. The script is dynamic, fun and refreshing in its ability to poke fun at all the things we are familiar with.

Special commendation should be reserved for the actors themselves. The protagonist was carried with arrogance, charm and enough stereotypical traits to make him an interesting personification of the many clichés found in cinema and in theatre. Luke Maskell undoubtedly does an excellent job of bringing Mike Bedigan’s script and character to life. Playing multiple roles onstage is often met with some trepidation; it is often difficult to make each character distinct from the next. However, there is no sign that Emily McLean struggled with this task. Each transition was flawless, and each character made wonderfully distinct and equally hilarious by changes in voice and mannerisms; she deserves high praise indeed. Despite the two-person cast, the stage never felt empty; instead it was filled with interesting characters, and actors who utilised the space with creative flair. No doubt, director Will Bedigan deserves acclaim for being able to achieve this.

Fascinatingly, the play also gave the audience some insight into the creative process behind the making of The Adventures of Slick Tuffman. Through breaks in character, and similar breaking of the fourth wall, the actors onstage discussed if they consider some of the jokes to be too risky, as well as arguing about who should monologue and when. Through the players, the scriptwriter is able to say his piece about the complexities of writing for the theatre and is keen to show that he isn’t cliché at all.

Slick by name, seamless by nature; The Adventures of Slick Tuffman is an incredibly enjoyable and consistently hilarious examination of theatre, films and the performing arts as a whole. Definitely check it out if you can!

The Adventures of Slick Tuffman: A Noir Comedy will be playing on the 10th February as part of DDF’s Assembly Rooms Theatre line-up, starting at 7:30pm.