Abby Hubbard revels in the humour of Kitty Briggs’ and Andy Ball’s ‘anti-rom-com’.

With the witty title hypoclitical, playwrights Kitty Briggs and Andy Ball set themselves a considerable challenge of expectations, one which I believe they met with huge success. This hilarious play follows two writers—one female, one male—trying to put together an ‘anti-rom-com’, whilst the Female Writer (Isla Brendon) attempts to educate the Male Writer (Mo Hafeez) on common tropes within the rom-com genre that should be avoided. Eventually, the boundaries between the writers’ own lives and the script they are writing become blurred, until they realise that they are ultimately writing a reflection of their own situation. hypoclitical is a wonderfully funny satire on romantic comedies, balancing one-liners and running jokes with serious issues and its characters’ own personal dramas.

Staged in St John’s College, the venue was intimate, and this was put to good use by the directors Layla Chowdhury and Grace Longman, as the fourth wall was continually broken through during the play in a way that enhanced the comedic effect and was highly engaging. At one point, the audience became employees being asked for ideas—that of course no one had—bringing to life the awkwardness of the scene. The set was also put together effectively: mismatched furniture, empty food packets and bottles, and books strewn across the stage clearly established the set as the home of struggling young writers before the play even began, allowing the play to run smoothly without any clunky exposition. 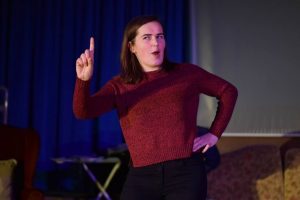 Briggs’ and Ball’s writing shone throughout the performance, finding punchlines from beginning to end, from groan-inducing puns to witty satire on conventions, with a well-handled running joke about a post office which is certainly not Royal Mail. The narrative flowed smoothly and was highly engaging, and the writers tackled their premise with great success; the gradual transition from the primacy of the real narrative to the imagined narrative of the ‘anti-rom-com’ worked very well, helped by the actors, especially Richard Penney as the Male Actor, who altered their acting style within the ‘anti-rom-com’ as the play progressed to become more naturalistic.

Projection and sound were also used to great effect within the play, despite some technical difficulties, which sadly did upset the flow somewhat, but not to any great extent. When it did work, rom-com tropes were marked with a ‘ding!’ sound effect and a projection of the trope’s name, adding to the play’s distinctive comedic style, which shifted between the real and the imagined.

The small cast had an excellent rapport and portrayed their characters well, all grasping the slightly exaggerated comedic style with ease and maintaining the pace of the play. The technical difficulties did interrupt their performance, resulting in a lot of corpsing, but in the intimate venue this was not a big problem; the audience was in on the joke, too.

hypoclitical is a strong piece of student writing, and a thoroughly entertaining and engaging play. The interplay of the real and the imagined narrative was carefully managed, never becoming confusing, and strong performances and direction made the play an all-round success.