More and more, sex is becoming a less and less taboo thing to talk about. It’s hard to find a topic in it that hasn’t already been explored to death. ‘Reckoning’, a play about two students being found having sex in school, manages it.

A simple, tightly structured play, ‘Reckoning’ flips between two teachers and two students waiting for a disciplinary meeting about the student’s actions. Alice Chambers and Luke Blackstock deserve credit for their stage directions here as they managed to make what is basically two long conversations dynamic and visually interesting. The dialogue too feels disturbingly natural with overlap and awkward pauses perfectly timed.

As for the writing itself, I’d say it’s the standout of the show. It was so nice to listen to and so wonderfully paced and well written. Mysteries and plot twists are revealed to the audience effectively and the flow of how these characters interact is expertly managed. Arguing to small talk to deep conversations, it’s all there and it all feels very realistic.

The performances in this show were incredible. Both Catherine Wright and Max Greenhalgh are equally brilliant and 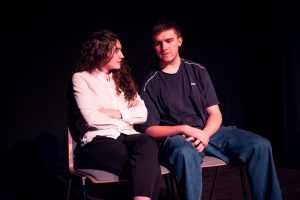 manage to each create distinct and relatable characters through playing both the teachers and the students.

I only had two flaws with this show. One, the transitions between the actors becoming the teachers and students was completely out of tone and kind of distracting. Disco lights blare and pop music plays after some pretty intense scenes and its lucky the dialogue and performances were so good because otherwise, I’d find it really hard to take seriously.

Two. I wanted more. The show only cracks about half an hour and while those 30 minutes are amazing, I felt like there could’ve been so much more detail. More reveals, more delves into religion, sex and sexuality. More witty banter between Wright and Greenhalgh and more information about their characters. I wanted to hear more of what Helena Snider-Martin has to say on the issues addressed because her writing on it is really interesting. It just ended very abruptly and that was a real shame.

The Mark Hillery Arts Centre provides a simple stage but ample room for the first production of Ophelia is Also Dead. Suddenly, Fionna Monk as Ophelia creeps onto the stage and sprints straight back inside the wings. Monk’s tentative, humorous entrance is emblematic of the rest of the play: Written by Aliya Gilmore, this play is a hilarious reimagination of Ophelia’s life, particularly her relationships with the other characters in Hamlet. Gilmore’s Ophelia is garrulous, blasé, and charmingly irreverent, and the dialogue shines with double entendre and wit. I could not help chuckling as Ophelia lamented, ‘Why couldn’t I have been in Macbeth?’. In her writer’s note, Gilmore fittingly comments that the play ‘flip-flops’ from different physical and temporal settings – I was particularly amused to find Hamlet unsure of what year it was, watching Horatio awkwardly yodel and gyrate to The Smiths,andlistening to Ophelia laugh at Laertes in Speedos.

In this high-energy, fast-paced play, audience engagement was very close and very successful. Hamlet, Horatio, and Laertes shook hands with audience members in the front row– clad in a black bathrobe and staring vacantly at the audience, Hamlet’s ‘nightly colour’ and ghostly countenance heightened the comedic effect. When Monk pinched my cheeks and stared straight at me while telling me, ‘You’re the reason why I’m here’, I was urged to contemplate the following: without a willing audience, how else can Ophelia fully convey her real experience beyond being ‘a pretty motherless girl drifting down the

The humorous, seamless incorporation of (and response to) the source material was another one of my favourite aspects of this production. For instance, Ophelia standing on a desk rolling her eyes at Hamlet’s oft delivered ‘Yorick speech’ successfully poked fun at the original play. The seemingly lukewarm boys school production of Hamletculminates in a visceral, combative confrontation between Hamlet and Ophelia because of the power of a single word – ‘nunnery’ from the famous ‘Get thee to a nunnery’ speech.  When Ophelia pulls rosemary out of her bra, and makes deadpan remarks about her mental breakdown, she segues into a ‘dad’ joke about critic Harold Bloom’s ‘over-analysis’, and momentarily panics about being like her father Polonius. Such a fear recurs throughout the play – Ophelia is worried about lapsing into the role expected of her, but she need not worry – for this play is certainly not what we expect it to be.  Instead of showing us the ghost of Hamlet’s father, we meet the ghost of Ophelia’s mother. The professionalism of the cast should be commended at her entrance, during which the white sheet of her costume was caught in a chair, but everyone carried on smoothly.

The play, like its subject and its source material, is highly self-conscious at times, forming many of its humorous moments. When Laertes jestingly tells Ophelia to stop monologuing, when Ophelia expresses her concern that she was merely ‘exposition’ in other iterations of Hamlet, and when the characters squabble over whose line is next, we are constantly reminded that we are in a play. If the purpose of playing is ‘to hold as t’were the mirror up to nature’, Gilmore’s play certainly succeeds in holding the mirror up to Ophelia’s journey from girlhood to womanhood and experiences in Elsinore. The ending is iconic – instead of floating helplessly in ‘bog water’, Ophelia puts on her goggles and waves goodbye, grinning at the audience.

Ladies Who Lunch, by Niamh Collins

Ladies Who Lunch, by Niamh Collins, has a simple premise: ex-colleagues, now over sixty, having not seen each other for thirty years, meet again to reminisce over afternoon tea. Masterfully worked by Collins, the play surpasses the simplicity of its premise, as lunch doesn’t quite go to plan, and the women set aside the afternoon tea and dig in to the subjects of motherhood, female friendship, and generational differences.

The beginning of the play gently eased the audience in with the cynical Sally, who was portrayed with an excellent weary stare at the droning on of her ex-colleagues so that the audience couldn’t help but warm to her. Then, with the introduction of each new character, the excellent characterisation of the entire cast became clear; each actor overcame the challenge of portraying an older character and presented a unique persona, a brilliant caricature of an ageing bourgeois housewife. Collins, and her cast, demonstrated an incredible gift for drawing comedy from the largely naturalistic portrayal of ‘ladies who lunch’, as each character was entirely recognisable (Vera, in particular, reminded me of a number of troublesome customers I’ve served as a waitress). These recognisable characters kept the audience engaged throughout the performance, ensuring that the play, which tackled controversial and emotional topics, always balanced tragedy and comedy. Even in the most intense moments of the play, Collins proved her impressive control of the script through her ability to mingle the tragic and comic, 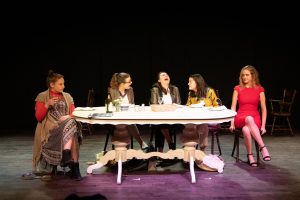 creating and releasing tension as she wished. The smaller part of the waiter was handled well in this respect; an outsider to the intensity of the conversation, his customer-service-cheeriness always lightened the mood, whilst highlighting the awkwardness of the whole situation.

Collins’s script was wonderful, navigating conversation with ease and making all dialogue and monologues sound entirely natural. But at the same time, the play’s use of silence was equally satisfying; the pause as the women picked sandwiches and scones was deliciously awkward. On top of proving she can handle these sorts of wonderful comic moments, Collins delivered some stunningly heart-rending monologues, delivered excellently by the cast.

One area of the play which I would question was the lighting design. The dimming of the lights in two key moments of the play seemed to break up the naturalistic flow of the dialogue, and appeared somewhat prescriptive, as if pointing out a little too obviously to the audience that something important was coming up. However, whilst the transitions between lighting states felt a little sudden, which perhaps could have been helped by a more consistent use of different lighting states throughout the play, the particular use of dimmed lighting did to a certain extent heighten the intensity in these moments.

This production was a wonderful display of student-written drama, and Niamh Collins was not let down by her talented cast and crew. Altogether, they presented a confident and sleekly directed piece of theatre, where the costumes, set, props and performers all worked well to bring Collins’s wonderful writing to life.

General Programme 2 will play in the Mark Hillery Arts Centre at 8pm on Friday 8th and 2:30pm on Saturday 9th February.