Save the Date, by Ollie Kirkwood

It’s fair to say that the majority of people at least know what Tinder is. I’ve used it (to varying degrees of success) and from experience I can tell you it’s a gold mine of creative and hilarious possibilities. The concept behind this musical is simple. A delve into online dating. An anthology of songs with overarching stories and characters. From a waiter waiting on love to a self-proclaimed one-night stand addict, this play tackles the expected situations and tropes associated with the modern age of ‘dating’.

Ollie Kirkwood definitely deserves credit for his ambition here. Musicals are hard enough on their own but having thirteen interconnecting characters with multiple storylines seems like a particularly challenging 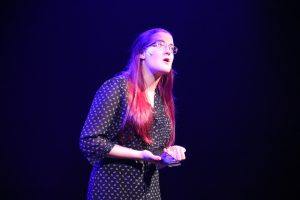 thing to accomplish. The songs themselves were nice to listen to, with decent harmonies and well written lyrics. Isla Brendon’s vocals were a standout in the selection of solid singers that make up this play and Kyle Kelleher’s brief appearance as a stereotypical playboy made for a memorable performance.

The comedy was hit and miss at times but overall the show was an entertaining watch. The biggest issue I have is it didn’t really add anything new to the conversation. It was predictable. I could see where every plot was heading as soon as it began. There were also just far too many characters. You don’t get to go in depth with anyone except maybe Connie, played beautifully by Aimee Dickinson. I would’ve liked to see more from Heather, Bridget, Fender and Nathan. The rest of the cast felt almost irrelevant at times and I think the show would have been tighter and better executed without them.

Choreography is another challenge that musicals face and unfortunately here it was way too simple for the number of people on stage. The actors all projected upwards despite the fact the audience at the venue were at the same level as them. This created a weird and unnecessary disconnect between the audience and characters.

Overall, I did have a good time watching this play. It was funny, well written and with a few more weeks of rehearsals I think it could have been something quite special. I just wish the storylines had been as original as the concept behind them.

Poseidon’s Playhouse by Alex Julian-Ottie was a chaotic comedy of errors with generous sprinkles of crude humour and physical comedy. Underneath the presentation of seemingly superficial characters and plot, lay a weak attempt at a contemplation on the tragedy of reality in contrast to fantastical expectation. However, the cacophony of the play spoke louder than much else, and amidst the scarce and scattered laughs of the Mark Hillery Arts Centre, reeks of potential unfulfilled.

The actors seemed to make the best out of the material they were presented with, however, certain notable performances were by Izzy Murray as the mousey single mother Jane and Ewan South as Saul, a distracted thirteen-year-old with immense respect for his pathetic father. However, the chaotic and patchy nature of the script didn’t allow the audience to connect or form relationships with the characters, and 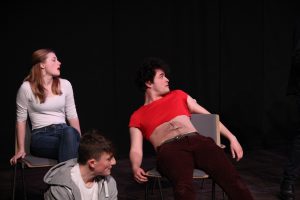 could have set the foundations of their personalities more effectively. Even with Ned, the character present in every scene of the play, it was difficult to feel any sympathy for his desperate antics to earn the admiration of his friends and family. Sparing the tender moment between Ned and Saul where they express their love for each other as father and son, the audience was denied any attachment to the protagonist of the play.

The comedic moments of the play were mostly hit-or-miss, but they became most effective in the lead up to the climax of the play. One of the highlights of the play’s direction was the use of lighting to effectively support a cartoon-like transition between scenes. Another shining moment was the portrayal of the simultaneous events of an internal and external setting in the play through the changing focus of the spotlight and the seamless pause-and-play direction of the actors. Such gems of organized cacophony were sneak peeks at what the play could have been with more consistency and better use of the stage elements.

The climax of the play was both unprecedented and fitting with the ridiculous tone of the rest of the play, however the plot seemed to pick up only in the latter half; certain parts of the first half seemed fruitless and irrelevant in hindsight, seeming purely for comic effect. Perhaps they would have been more enjoyable if the crude jokes and childish humour didn’t lose their novelty as early as they did. However, there were certain points where Griffin Sheldon’s delivery as Ned was impeccable and prompted hearty laughter.

Conclusively, Poseidon’s Playhouse left me bewildered, confused, but curious as to what it could have achieved. The premise was interesting, and the direction had moments of genius, however the chaos of the play ended up clouding its impact on the audience. Nevertheless, the play never lost my attention, and I’m excited to see what Julian-Ottie does next.

Whatever Happened to Christopher Robin?, by Charlie Whitehead

Whatever Happened to Christopher Robin? by Charlie Whitehead was a sinister take on the story behind a lovable childhood icon, yet tinged with an emotional tenderness that made it a beautifully immersive experience. Supported by a strong cast and the excellent facilities of the Mark Hillery Arts Centre, it achieves what it intends to; a deep exploration into the nature of human relationships and how we can all be a little more considerate to one another.

The beginning of the play was a little wobbly, with the loud sound effects of rain overshadowing the actual voices of the actors, however the entry of the journalist that immediately pushes the plot forward was executed really well; even the detail of the bright yellow umbrella immediately signaled to the audience that something was about to happen, whether an intentional choice or not. The play immediately picked up pace and was embellished with the stellar performances of the actors, most notably Lucy Little’s incredibly touching performance as Jane Robin, a naïve young woman in love with a fractured soul that immediately held my deepest empathy. Barney Mercer’s performance as Christopher Robin was also 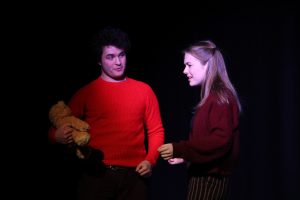 impeccable and incredibly nuanced; his outbursts and mental breakdowns were never seemed like a caricature and were portrayed with a believable intensity.

A memorable and impactful feature of the play was the use of a high-pitched ringing slowly increasing in volume to indicate the onset for Christopher’s mental breakdown; it aligned the audience with his state of mind and was an effective directorial decision. Whitehead also uses effective moments of silence in the conversation between an older Jane and the journalist in order to heighten the emotional impact of a scene, showing the precision of her artistic execution.

There were some moments of wavering consistency, such as the unsettling performance of Ewan South as Dr. Woolsy, a psychiatrist who was presented in a way which suggested he possessed an emotional instability of his own; this effectively led to a more antagonistic view of Jane and her attempts to help her husband. In addition, some of the dialogue between young Jane and Christopher Robin seemed petty and inadequate in comparison to the fragility of other scenes. Nevertheless, these instances were only slights chinks in the armour, and the tone was instantly redeemed by Whitehead’s excellent writing and direction.

Overall, the play presented a tainted view of the myth behind the conception of the escapist fantasy that Winnie the Pooh offered. At the end of it, I was left with a heartache and slight sense of injustice that Jane Robin refused to let her name headline her own story. The sympathy that Whatever Happened to Christopher Robin?gauged for its characters made for an excellent viewing experience and thoroughly engaging.

General Programme 1 will be playing in the Mark Hillery Arts Centre at 8pm on Thursday 7th and Saturday 9th February.