Issie Osborne is amused and touched by Bróccán Tyzack-Carlin’s play. 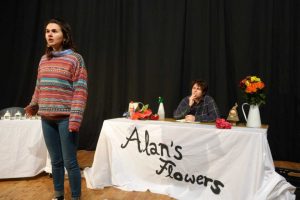 With this being my first trip to the Durham Drama Festival I was unsure of what to expect from Durham’s latest up and coming student playwrights as I entered the Black Box space in Caedmon Hall. However, it soon became clear to me that I was in for an evening of fantastic original theatre, and it was a privilege to have the opportunity to enjoy and comment upon the writing, direction and performances of some of Durham’s finest talent.

Tyzack-Carlin’s play Flowers N That tells the story of an unlikely friendship that blossoms between a florist and a medium as they meet each year at an annual wedding fayre. This black comedy discusses life, loss, and Gareth Gates, and explores how relationships can clash with our principles and our past. This play had the perfect balance of comedy intertwined with deeper, more emotional themes, and every member of this production should be incredibly proud of the result they achieved.

Cast members Victoria Bull, Hamish Lloyd Barnes and Tristan Robinson all gave outstanding performances, and it was a pleasure to become encapsulated in the lives of characters Jane and Alan throughout the performance. Bull gave a convincing portrayal of Jane, the quirky medium trying to make a living through her company ‘Dead Proud’, providing spirit-channelling services at the unlikely scenarios of weddings. Bull captured the comedy of the role particularly skilfully, with well paced deliveries of witty lines balanced beautifully with a sincere delivery of the more emotional-themes. This helped the audience understand that there is more to the character than the ditsy, eccentric initial impression. Whilst this was the case, Bull did tend to rush a couple of her lines, occasionally detracting from the meaning of the writing, but this was outweighed in the majority of her performance.

Lloyd Barnes provided the stand-out performance for me, effortlessly portraying the private but genuine character of florist Alan. I felt Lloyd Barnes portrayed the progression of the character particularly well, from an initial hostile demeanour towards wedding fayre neighbour Jane, to the incredibly vulnerable and broken young man we came to see towards the end of the play. Lloyd Barnes did well to successfully build the progression of this character to a climax which was beautifully delivered, and the emotion in the sequence engaged the audience immediately, providing an acute contrast to the humour that filled the earlier stages of the play.

Robinson provided the comedic interjections of ‘The Voice’ which were fantastically delivered with near perfect comedic timing. The interjections of these more humorous speeches were perfectly placed by writer Tyzack-Carlin so as to intersperse tension at times where the conversation between characters Jane and Alan reached more emotional themes. The use of these ensured that the more sombre themes were never overdone, allowing the climax of the piece in Alan’s emotional collapse to be as convincing as possible, an aspect of the play that I found to be particularly well thought out.

The Black Box venue worked particularly well for this production and director Alexander Marshall did a fantastic job with the simple but effective staging employed. The small stage area could have resulted in the production seeming quite static, but the nature of where the play was set allowed for the set of two wedding stands to work really well, and the direction used the space available in an effective way. This set layout also made it instantly clear what the play was about from the outset, and I felt the use of two individual stands was particularly effective in representing the two separate personal lives of the characters and Alan’s reluctance to open up to Jane and invite her into his emotional thoughts and feelings, something that she, as a medium, relies upon in her career.

As the small venue did not lend itself to any scene changes, the creative team made use of costume change to show the passing of time between the different wedding fairs, occurring annually. Whilst this made it more clear that time had passed, it wasn’t overly necessary to the explanation of the story line, and the extended blackouts in these periods did interrupt the flow of the show somewhat. However, given the space, the overall use of set, props, and costume was successful and well thought -hrough.

As a piece I believe Flowers N That was written incredibly well, and Tyzack-Carlin found a great balance between well-written comedy, which had the audience in fits of audible laughter at times, and an exploration of deeper and, at times, more emotional themes. The play was successful in the way it drip-fed information to the audience about the individual characters which was encased in comedic discussion, aiding the flow and balance of the piece. I thoroughly enjoyed the many extended comedic sequences, which is a clear forte of Tyzack-Carlin’s, but it was with great skill that he intertwined this with the exploration of more serious themes, and at times I forgot that this was original student writing I was watching. Everyone involved in this production should be extremely proud of what they have produced and if you are free tonight I implore you to attend this fantastic evening of new and exciting student theatre.

Flowers N That will be playing on the 10th February as part of DDF’s Black Box line-up in Caedmon Hall, The College of St. Hild and St. Bede, starting at 7:30pm.