Chloe Jo enjoys Zac Tiplady’s exploration of pregnancy and the world of fashion. 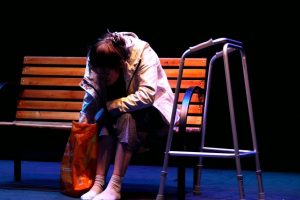 Cloudburst is about the most common, extraordinary and frightening prospect a woman can face in her life: pregnancy. Zac Tiplady’s play throws us into the high-flying world of fashion magazine director Alana Marie (Eleanor Hawkins), as she is confronted with this new reality and struggles to come to terms with the ‘parasite’ inside her. This was a fun, lively, yet touching piece that, all in all, provided the perfect end to a fantastic evening of drama.

The characters filled their roles to the brim. Fifi, (played by Savy Kyo Des-Etages), was every bit the larger than life fashionista, and Hugo (Dan Hodgkinson), was the epitome of the wincingly egotistical, chauvinistic, (hand) model. Telling the story alongside these characters were three narrators, who, through beautiful rhymes, painted even bolder, clearer pictures of the personalities filling the stage. Overall the writing was brilliant, the comedy was woven excellently throughout the dialogue and executed with pizzazz by the cast. The use of flashbacks to the night of the romance, complimented by brilliant music and lighting, was the comedic highlight.

At times, however, the jokes failed to hit the mark, relying too much on exaggerated stereotyped characters from the fashion world. The presentation of archetypical characters obscured their depth, particularly the protagonist’s. The constant level of stress that Alana exhibited as head of a fashion magazine prevented the audience from seeing different sides of her, only glimpsing a more relaxed figure on the night of her whirlwind romance with Hugo. Her inability to see beyond the birth of her child, and unwavering view of herself as a ‘menopausal business women’ were some of the aspects that further pigeonholed her into the ‘character’ of the powerful, detached fashion magazine director. Eleanor Hawkins did well to play a character that showed little development over the play. Having said this, the writing had all the ingredients of greatness, demonstrating its ability to move us through the subtle connection between the hands of the foetus and the hands of its father.

The staging was perfect. The use of music, lighting, and props to switch from the doctor’s surgery to Alana’s office was clever and effective, and the setup of the last scene was beautiful; Alana and the geriatric were lit beautifully under three fluffy clouds. Tiplady’s story filled the stage, and despite wanting a more nuanced reflection on such a pivotal moment in Alana’s life, the play more than delivered on its comedy and gave the audience characters that will stay with them long after they have left the Assembly Rooms.

Cloudburst will be playing on the 10th February as part of DDF’s Assembly Rooms Theatre line-up, starting at 7:30pm.