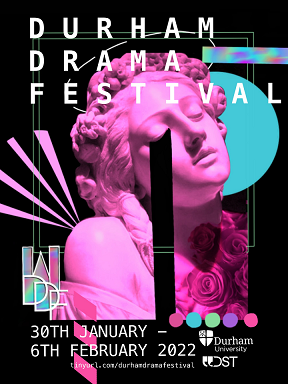 “DDF has truly displayed what Durham has to offer”

One of the most anticipated weeks in the Durham Student Theatre calendar, the Durham Drama Festival, never fails to disappoint. This year was no different. Showcasing student writing, directing, production and acting, the collection of three shows portrayed at Assembly Rooms was highly impressive, well-rehearsed and, certainly, enjoyable.

Mrs Alexander, written by Eloïse Richmond and directed by Barney Watts, explored the story of a couple in 1930s Chicago whose relationship turned toxic following the loss of their child, and Mr Alexander’s psychological descent. Encompassing challenging themes such as abortion, manipulation, and suicide, the actors demonstrated a depth of character. What was particularly impressive was the characterization of the supporting cast as well, notably Scarlett Carter’s ‘Angela’ and Raphael Kris’ ‘Jack.’

Whilst the protagonists, Mr Alexander (Ben Willows) and his wife, Mrs Alexander (Charlie Culley), were often repetitive in their facial expression and delivery of lines, it is undoubtable that much skill and talent was at play in their performances. Their onstage chemistry was notably believable, and towards the end of the play they really built the tension.

The fluidity of the writing might have been further developed, despite the piece’s ingenuity. With slightly jarring scene transitions, and a confusing passage of time, there is still some room for improvements in the script. Nonetheless, as the play went on, the story and its characters became increasingly realistic and skilfully believable. A fantastic first performance to watch.

The second, and stand-out piece, of the night was Millie Glenister’s Hotel Charmon. Expertly directed by Ellie Fidler, the farcical comedy had the audience in hysterics on more than one occasion. The directorial intent was clear, focused, and hilarious, made even more impressive by the acting. Isabelle Thompson as ‘Julia’ and Alexander Bittar as ‘Tony’ displayed excellent comedic timing, and spot-on caricatures. Both actors are clearly made for the stage – their dramatic reactions, flair and facial expressions are a true delight to watch.

The supporting cast was no less impressive – personal highlights included Wendy (Miriam Templeman) and Greg (Tansy Adam). They provided a perfect contrast to the protagonist, and perfectly captured the parody of their characters – a hotel maid and gangster respectively.

The final piece of the night was the superbly written Cottage by Ben Willows. The dialogue between protagonists, played by Ben Willows and Stephen Ledger, was fluid, emotional and thought-provoking. Based on an oft-ignored element of queer history, the show explores the interactions of two men and their voyeur meeting in a public bathroom to have sex. Darcy de Winter’s portrayal of a watchwoman punctuated the piece with energy and supplied a counterpoint to the depth and intensity of the interaction between the two other characters.

Praise must go to the technical team for this production too. The lighting changes greatly impacted the mood, and cleverly highlighted the actors when delivering stories about their emotional pasts. The set was also wonderfully crafted, and the division of the two bathroom stalls allowed for reflections to be made upon intimacy, separation, and the way we communicate. The play truly illustrates the desire we all have to be wanted.

Overall, a fabulous evening at the theatre. DDF has truly displayed what Durham has to offer, and the audience’s reaction throughout the evening – whether that be stunned silence or hysterical laughter – only speaks for itself.