Rowan Evans becomes immersed in the 1979 video game that Jasmine Price creates in her brand-new play. 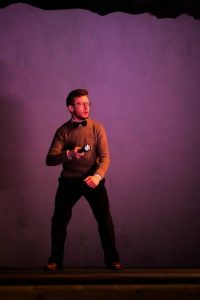 AQUA SPECTACULA is a new play, written and directed by Jasmine Price for the Durham Drama Festival. It follows a kid, transported into the unreleased 1979 game “AQUA SPECTACULA”. The play then launches into a fever dream of flashing lights, over-the-top characters and pumping 80s music. The kid must help professor Turtle save the ocean by proving the existence of an elusive “Golden Coral”. I enjoyed the spectacle of this play, but thought some elements could have gone further. Despite this, AQUA SPECTACULA is a thrilling ride, as funny as it is relevant.

One of the best features of this play was the audience interaction, and because of this it could have gone further. I would have liked to see it become more of a main focus for the play, playing into the video game tropes a bit more. When used it did work well though – letting the audience name the main character (in this case Jeffery) was a nice touch.

The sound effects and music were chosen well, playing to the irreverence of the production, and conveying the 80s aesthetic. In this way, it was a shame that some of the execution of sound effects was a little off in many moments. Nevertheless, the musical numbers were very entertaining – owing much to the choreography of Rosie Dart. This was underpinned by the effective lighting, which was best in the underwater sequences.

The actors were energetic and distinctive in their roles throughout. I thought it was a great idea to introduce each of them via a character selection screen style line-up. The standout performance for me was the video game itself, Aqua. It came only in the form of a voiceover but set a brilliant tone for play.

Many of the actors behaved in a ‘glitchy’ style, kept up for the length of the show, which captured the stilted behaviour of video game characters. Sometimes I felt as if this was a bit overdone in some stuttered line delivery, but for the most part it was very funny. It worked especially well in the scenes with the mother, played by Fionna Monk, which was reminiscent of the openings of Pokémon games.

Continuing with the game-like elements, to transition between scenes using ‘loading’ was a great idea. These were awkward and slow in the best possible way. I enjoyed how, when the scene was “100% loaded”, the actors would snap into action into a new scene.

I appreciated how the play conveyed a positive message of environmental awareness. Despite the fact that the corporation won the game in the end, Aqua implored that the kid to keep playing once back in the real world.  The myriad of audience interaction implied that it is also up to us to make a change.

While this is only one show, its message shouldn’t stop at the theatre doors. Jasmine Price has made a hopeful case for the protection of the environment through this humorous and thoughtful play.

AQUA SPECTACULA will be playing on the 10th February as part of DDF’s Assembly Rooms Theatre line-up, starting at 7:30pm.