REVIEW: Daisy Pulls It Off

It might sound a foolhardy venture, to try and put on a play exclusively produced by and starring freshers, and freshers from a single college at that. Doing it all within two weeks might sound positively like madness, and yet this is just what Hild Bede Theatre have tried to do this year with their Fresher’s Play, a performance of Denise Deegan’s Daisy Pulls It Off, a parody of good old-fashioned boarding-school adventure stories. Despite the difficulties these and other constraints provided the show with, Daisy was nevertheless entertaining, and demonstrates great promise for all involved.

The show, framed as a school production, tells the story of Daisy Meredith as she attends the esteemed Grangewood Boarding 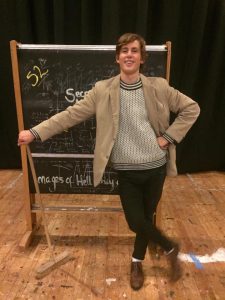 School on its first ever scholarship scheme. Extremely talented, she struggles to overcome the snobbish attitudes of the wealthier girls and the endless pranks they pull on her, whilst also attempting (with help from her eccentric best friend Trixie) to find the ancestral treasure which alone can save the school. The play catalogues acts of both supreme naughtiness and angelic good sportsmanship, all in a lighthearted pantomime-esque package. For those familiar with the tropes of the boarding-school tale, this will prove itself to be a story entertaining by its very predictability and ridiculousness.

Caedmon Hall is a large, echoey venue, difficult to fill by any show, especially one with a small cast, and so in the smaller scenes the actors often seemed a little lost. This, on top of the production having no tech team or proper lighting working (through no fault of their own), gave the cast and crew a lot of obstacles to overcome, and though they battled through them valiantly this was still detrimental to the show as a whole. Without sound or lighting, it was sometimes hard to understand the transitions, and the story-book asides often blurred confusingly into the main action. It is, however, a testament to Francesca Haydon-White’s directorial skill (assisted by Courtney Power) that the staging always managed to evoke the scene despite flat lighting and minimal set.

What stood outmost in this production was the individual actors’ skill and promise. Posh private school students are unambiguously familiar territory at Durham University, and so it is perhaps not surprising that the cast performed so well in these roles. Lauren Hayes starred as Daisy, with a highly fluid performance as a likeable Little Miss Perfect, and alongside Sophia Pym as best friend Trixie, provided an excellent central double act. This was wonderfully countered by the joyfully repulsive performances of Beth Mortimer (Sybil) and Georgia Crown (Monica) as the smarmy snobby rich girls always out to get the ‘common’ Daisy and nip the accursed scholarship scheme in the bud. Lorna Fraser was wonderfully matronly as the 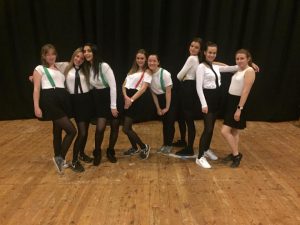 teacher Miss Gibson, and Ciaran Duggan suitably dastardly as the suspicious Mr Scoblowski. For me, Phoebe Masters as Head Girl Clare stood out as poshest of the posh, with an accent to put the royal family to shame, and showed great ability in her portrayal of the wise older girl. Despite a few hiccups, no doubt down to not just first night nerves but for some first production nerves, the whole cast gave great individual performances as the satirical stereotypes of Grangewood.

When reviewing this play, perhaps the most important consideration is that it was indeed done by DST first-timers in less than two weeks of rehearsal. Subsequently, in a number of ways the production felt unfinished, half-baked. It was lacking in a lot of pace, and at many points comedy too, with the actors’ physicality very static and the space underused. While scenes like the hockey match showed the great potential of both actors and directorial team to create exciting, unified scenes, in many places I felt the cast needed to work more as an ensemble, combining their acting talents into a whole greater than the sum of its parts. If only they’d had a longer rehearsal period, I’m sure, the play would be not only slicker and faster, but more developed in its group scenes and comedic elements, as well as individual physicality. What the cast and crew have managed in the time frame is, however, truly commendable, especially lacking in experience as they are.

Daisy Pulls It Off is far from perfect, but given all its difficulties it is still highly impressive, and Deegan’s plot is as compelling and charming as ever. This production is truly a testament to what these first-timers are capable of, and I’m sure we shall expect great things from them all in productions to come.

Daisy Pulls It Off will be playing in Caedmon Hall at 7:30pm on Friday 2nd and Saturday 3rd November.