After the first night of Constellations, the general consensus among audience members was that it was unlike any show we had seen in Durham before. For its genderblind casting, its venue choice and totally stripped-back staging, director Gabrielle Raw-Rees delivers a one-act production which is graceful, refined and well-executed.

The first thing that strikes any audience member of Constellations is the unique choice of venue – this year has seen some creative performance spaces but Letterbox Productions has gone one step further with the Ogden Centre for Fundamental Physics. For a play in which one character waxes lyrical about the multiverse and cosmology, a building which houses Durham University’s research into the nature of space and time could not be more fitting. The show is staged on the first floor in the large atrium space, offering the audience a view of the Ogden Centre’s angular and precise structure. A set of metallic polygons are suspended from the railings above, to remind us that cosmology is at the heart of Constellations.

With an audience capacity of around forty, it is an intensely intimate production, keeping the audience closely engaged in this 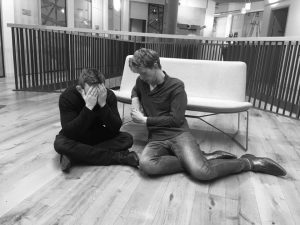 two-person play. The staging is also minimal, no more than a sofa at the back of the performance space, but this really allows the performance itself to take centre stage. Constellations lasts a little over an hour, and with no additional set, lighting or other props, there really is nowhere to hide for actors Jack de Deney and Mark Woods. Between them, they engage the audience the whole time, never seeming to mistake a line or forget a cue. Perhaps the biggest challenge for the actors is the essentially fragmented nature of Constellations; it dwells heavily on the idea of the multiverse, that every decision made or not made exists somewhere, and so every scene is echoed and reconstructed several times over with a different emphasis or story to it. A two-person show is hard enough for any actor, but one in which many of the scenes are fundamentally identical is even more of a challenge.

As a duo, Woods (Oliver) and de Deney (Roland) are wholly believable and work together confidently and easily. Nick Payne’s script demands radical shifts in atmosphere in a matter of moments, and both rise to this challenge, making the audience laugh one minute and sob the next. It is hard to distinguish each performance separately when the nature of the script sees 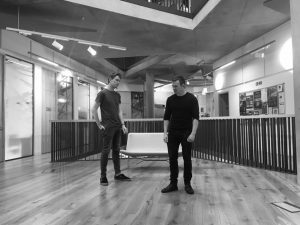 both play the jealous lover, the angry ex, the hapless fool – they slipped in and out of these roles easily and bounced off each other naturally. The creative decision to cast two male actors in a play originally written about the heterosexual relationship of Marianne and Roland was a bold one, given Constellations is so well-established and has seen many famous actors take on the roles. However, it did not seem to make much difference to the audience experience in this regard; it felt like the production team had simply chosen two excellent actors who worked well together.

Of course the technical elements of the production are severely restricted by the venue choice, but the most important element was sound. Between each scene change, Technical Director Matthew Redmond plays the sound of bees buzzing (beekeeping being another central motif in the play), while Woods and de Deney physically represent a shift in time, either to repeat a scene or move on to something new. Occasionally, during the longer of these vignettes when the actors had to move half way across the stage, they felt a little clunky or incoherent, but were fundamentally graceful and a clever way of fulfilling the demands of the script with minimal tech or staging.

Constellations  will be playing in the Ogden Physics Centre at 8pm on Tuesday 18th June.