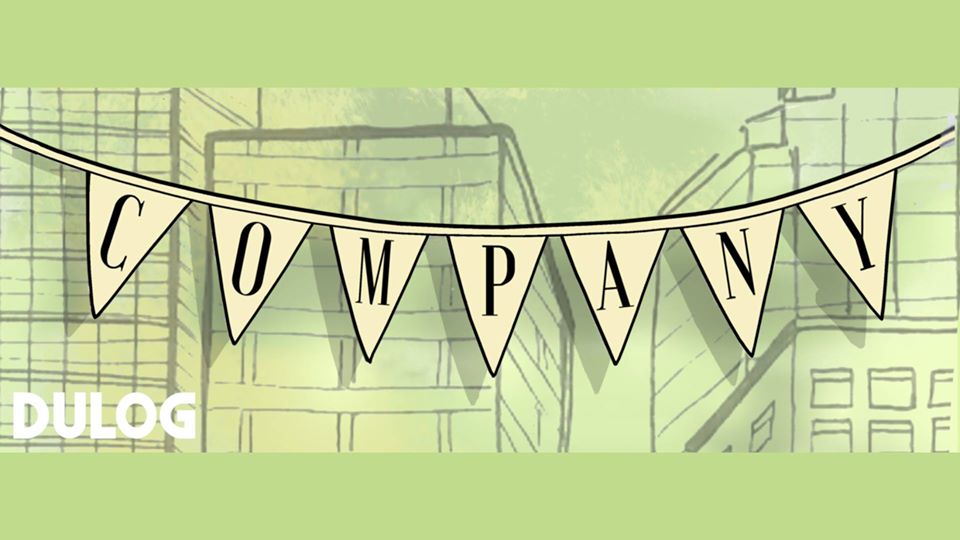 Since I arrived at Durham last year, I had heard much about DULOG’s reputation for being one of DST’s finest examples of professional level musical theatre and was looking forward to see if their first show of the year, Sondheim’s Company (directed by Mary Lord & Niamh McErlean), would match up to these claims, I am happy to say that the production exceeded my expectations.

The play follows Robert (Owen Kennedy) a young bachelor in New York in a series of seemingly unordered vignettes where he visits his various married friends receiving their unique insights into marriage from the perspective of their sometimes bizarre, sometimes alarming, but always humorous relationships.

The opening titular song ‘Company’ was strong and bold with impressive vocals and well performed choreography and this level quality persisted throughout the show. The cast were all comfortable in the songs they were given and kept good time with each other throughout the various numbers. The quality of the choreography was especially apparent in the shows rendition of ‘You Could Drive a Person Crazy’ involving Robert’s three lovers carefully mirroring each other’s movements one after the other with impressive timing. Though the choreography wasn’t especially complex this was more likely due to the Assembly Rooms stage’s restrictive size for such a large cast and it was clear the directors had taken careful consideration into how to effectively utilise the small space. I commend the use of bright matching colours for each couples outfits, as this prevented the stage feeling overcrowded and chaotic during musical numbers where the whole cast was involved and their contrast with the simple white set also gave the clear idea that this is a musical focused on characters.

As a musical focused around relationships and people it was extremely important to have a strong cast not only on an individual basis but one that worked well together to capture the dynamic of the various married couples and this was evident in the careful choice of casting with each member bringing something unique to the table. Owen Kennedy did not have much to do in the acting side of the show serving more as a through-line for the various vignettes but demonstrated impressive vocal range in his songs.  Francesca Davies-Caceres effectively conveyed a jaded and cynical multiple-divorcee, Elysia Boyle and Ben Cartwright gave an almost suspiciously convincing and humorous performance of being stoned and Millie Blair came across as a sassy confident young woman with a real passion New York.

Miriam Templeman’s performance as Amy was especially impressive starting with a rapid-fire performance of ‘Getting Married Today’ which would have left Lin-Manuel Miranda impressed and continued on to capture a neurotic, nervous soon-to-be bride in a hilarious manner that was no doubt extremely draining to perform. Rose Galbraith also stood out in her effective characterisation as April the ditzy air hostess, with excellent comedic timing and hilarious line delivery that never failed to get a laugh. Ellie Fiddler and Mark Woods also both gave humorous performances in their own right as Sarah and Harry, a couple at odds with each other struggling with their vices of food and alcohol respectively, however I felt a slight lack of chemistry between the two and would’ve liked to have seen them play off each other a little more.

Overall the show ran without any major issues, there were some unfortunate problems with the cast’s microphones with fluctuations in volumes, static and occasional failures all together, nevertheless in the face of these issues the cast soldiered on and despite being near the back of the venue I was till able to hear them even at points where the mics stooped working completely. The band itself played beautifully with no one out of rhythm or off key, though I feel the show would have benefited from having them play slightly quieter as they often overshadowed the vocals. Despite these issues I walked away from Company in good spirits and feeling proud to be part of a university that offers such professional performing and production opportunities to so many talented young students, and would recommend Company to anyone looking for an evening of fun, light-hearted entertainment.