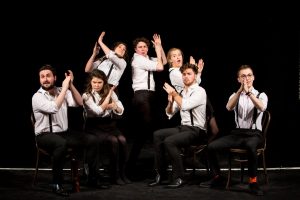 The Durham Revue’s Comedyfest is a personal highlight in my calendar. I am a massive Revue fan, as they introduced me to the joys of sketch comedy, and being able to see what else is happening in the world of student sketch troupes is both at turns fascinating and exciting. The Gala Theatre was packed last night, audience members clamouring to see the latest offerings from nationally-renowned companies. On the whole, it was an enjoyable evening. Aside from what I felt were slow moments in otherwise tight productions, the audience appeared to be highly entertained.

The Oxford Revue opened the night, with what I thought was a show of fairly mixed successes. I wasn’t expecting the stand-up routine that started the sketch comedy set, but I was pleasantly charmed. It was entertaining, even if it did feel like quite gentle laughs from the audience, and I believe the song perhaps could have been shorter. The three sketches that followed were again charming but not rip-roaringly funny. The longer final sketch, with its layers and layers of meta to tumble down, was executed more smoothly and professionally, but again felt too long in sections. On the whole, it was a solid set, and I was endeared by the ensemble, but I feel it may have benefitted from more considerations to its overall structure.

The entire premise of the Cambridge Footlights’ set was surprising and refreshingly unexpected – they couldn’t speak on stage. It was a performance filled with confident aesthetic, fancy-looking coloured light boxes, and use of video and projection that reminded me strongly of Internet meme culture and humour. They worked together as an incredibly cohesive ensemble, more so than Oxford, and I was felt feeling impressed by the amount of sheer work that was evident. There were some drawbacks, one being that every sketch bar one felt as though it was slightly confused and a little too long. During the middle of the set, they broke their self-imposed ‘no talking’ rule in order to have an interview with Tinky Winky that suffered from the use of one microphone between two. Their best sketch was their last one, simply done with a clever premise (I’m a sucker for a penis joke) – and when they were short, quick, and snappy, they really shone. I enjoyed the ingenuity of their new angle on sketch comedy, as it was (if you’ll pardon the phrasing) wonderfully and delightfully refreshing.

Then, after the interval, we settled in for an hour of Durham’s most prestigious sketch group. I saw No Strings Attached earlier on in the year, so I was able to distinguish between the new and the tested, and both felt equally as good. The show felt polished; the Revue are particularly skilled at their deft handling of shorter and longer, ensemble and one-man sketches. There was the odd sketch that didn’t have a strong ending; ones where the audience (after having laughed or even gave a scattering of applause) weren’t sure what to do once the sketch had finished.

On the whole, each member of the Revue should be proud of their performances, moving from sketch to sketch with deftness that was only slowed through, again, occasional moments that dragged on for a beat too long. The Revue can go from strength to strength with only a few lags in between – I particularly enjoyed the dance number at the beginning and some of the shorter, snappier jokes. I also really appreciated each Revue member having pretty much the same amount of stage time as each other; like the Footlights, it felt well structured as a whole performance. Again, it was really validating as a long-standing fan of the Revue to see that Lydia Cook, Charlie Billingham, Rosie Minnitt and Hamish Lloyd-Barnes have all become more confident, working the crowd with the same deftness as the rest of the troupe. Tristan Robinson’s moment of glory in ‘Phone a Friend’ was perfectly timed (his face does dead pan so well). I am also amazed at the sheer amount of energy Lily Edwards conjures and manages to sustain throughout an hour, making her so entertaining to watch (and I’m glad she didn’t fall over the Circle chairs and into the stalls below). As a personal stand out, Luke Maskell had a fantastic night. The audience was in the palm of his hand; his ability to embody a wide variety of physically comedic personas was impressive, alongside relying purely on his story-telling skill (quite literally in ‘Patricia and the Wolf’).

One downside to the entire night as a whole was the execution of the technical aspects. This was something that plagued all three shows, through what I can only imagine is a lack of preparation time for the Gala. Unfortunately, these issues particularly crippled aspects of the Footlights’ set, due to their understandably heavy dependency on tech to support their jokes (the David Tennant interview was slowed due to the tech and the performers becoming out of sync). The Revue, too, had their musical glasses sketch affected due to poor timing of sound cues. When the tech was executed on time, however, it was extremely effective, and even added to the comedy on occasion.

I had a good night; I love seeing what other theatre societies are up to, and I was entertained by the Revue’s visitors for the evening. It was good to see all three troupes trying to push the boat out, and do something different (like the stand up, using no words, and choreographed dance routines). The shows we witnessed all have potential to become unquestioningly fantastic, and I hope these sets that we saw last night develop even further into amazing pieces of sketch comedy.