ComedyFest provided a rare opportunity to directly compare and contrast this year’s crop of sketch comedy troupes from the Cambridge Footlights, The Oxford Revue and the Durham Revue. The atmosphere in the Gala was lively, and everyone seemed in high spirits, ready to enjoy some fast-paced, original sketches. Then our opening act, The Oxford Revue, took to the stage. Their style was very much toward the longer, more premise-based rather than gag-based end of the spectrum, which would have been fine, if the premises had held water. Polite, optimistic titters from a sold-out Gala audience receded as we struggled to buy into such scenarios as ‘man wants build a bear clothes, but for himself’ and ‘what if chess players were on 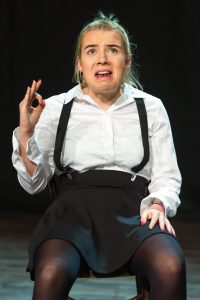 steroids’. Throughout their half-hour set, the sketches felt formulaic and trite, and this was not counteracted by the performance, which matched the writing in its lacklustre nature. Sketches not landing is an inevitability, but there was something excruciating about witnessing a hit rate as low as this, with sketches dragging on long past the point where the audience is done with them. There was one performer who didn’t seem completely out of place on the stage, and his delivery in a Thomas More sketch gave a glimmer of competence in otherwise murky waters, although in hindsight, such moments of relative humour were flattered by the surrounding content. A friend sitting elsewhere in the audience left the auditorium after fifteen minutes of Oxford’s set, leaving the instruction to send for him when it was over. An extreme measure, certainly, but hardly a good sign.

The Footlights tagged in, and within seconds had elicited a greater laugh than had the previous half an hour put together. The troupe were commanding on stage, versatile and, crucially, endearing. The sketches themselves were at times bizarre, at times more straightforward, but always felt original, and never predictable. Proof that the audience were fully on side came in a Eurovision sketch that was possibly the highlight of the night, where a two minute silence had the house in howling laughter and offering forth rapturous applause. In terms of laughs, the Footlights probably emerged victorious from the evening’s programme, but it is easier to fill a half-hour slot with premium content than an hour; the amount of time allocated to The Durham Revue.

Despite this more difficult task, The Revue were very impressive, definitely showing themselves to be the slickest outfit, and putting on more of a show than their Oxford and Cambridge counterparts. The energy was high, with all members dancing wildly in the blackout transitions, suddenly stopping when the lights came up. This energy was infectious, and the hundreds of audience members were soon all on side. The sketches were greatly varied, from the reading of an excerpt from The Teletubbies’ Noo-Noo’s autobiography (delivered in pitch-perfect tones by Bob Howat, one of The Revue’s new recruits, all of 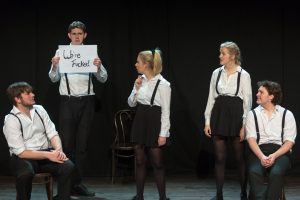 whom shone here), to the shortcomings of synchronised finger snapping à la West Side Story when faced with more regular gang violence. President Hamish Lloyd Barnes was a crowd favourite, with his gloriously exaggerated bodily and facial movements marrying with impeccable timing to result in some of the biggest laughs of the night. A personal favourite was a skit featuring Lloyd Barnes and the diminutive, bespectacled figure of Charlie Billingham offering a workshop in sketch comedy, performing a few short sketches and then explaining, in bizarre, condescending tones, precisely where the humour lay. Will Allen’s ‘Magic Mike’ sketch was a masterpiece in punchline sketch writing, another string to The Revue’s bow.

Variety was certainly a strength, and the troupe (including non-performing writer Charlotte Pugsley) have a lot to be proud of. The importance of tech in sketch comedy should never be understated, as slick tech (or the absence thereof) can make or break a sketch, and so credit must also go to technical director Helena Trebichavska who kept the whole night ticking over perfectly. All told, despite inauspicious beginnings, ComedyFest was a greatly enjoyable night’s entertainment, and the excited laughter and chatter of people spilling onto Millennium Place at the show’s close denoted a job well done. It was an interesting exercise having the troupes perform one after the other, and it certainly highlighted the differences in style, with The Oxford Revue not shown in a flattering light by this contrast, and The Footlights and The Durham Revue proving to be quite complementary to one another, with Cambridge providing a less structured series of separate sketches with several big laughs, and Durham piecing together a well-oiled, professional show, with great energy and variety, keeping people laughing from start to finish.