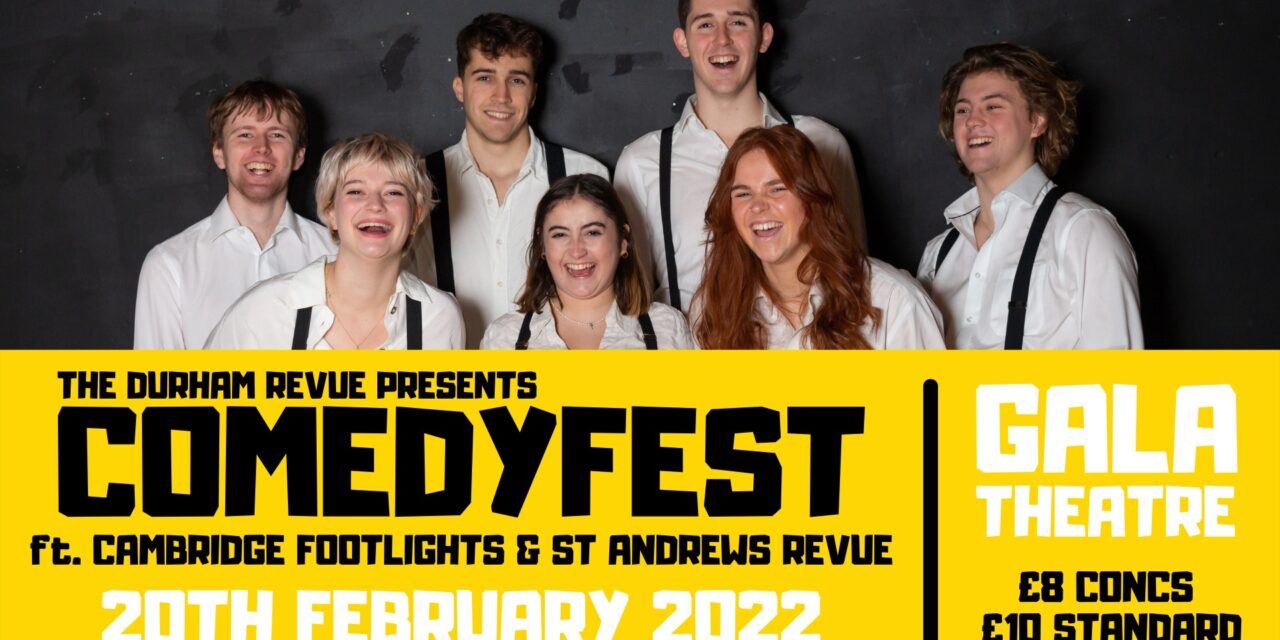 The sold out GALA theatre was in for a treat last night – in what was set to be a brilliant run of performances by some of the UK’s top student comedy troupes...

First up the St Andrews Revue. Despite potentially getting of on the wrong foot (naming themselves the UK’s number 1 University…..) a solid set of performances ensued. Their opening sketch, “big red car” seemed to go on for a bit too long – resulting in the punchline being lost and the overall impact of the sketch drying out. Nonetheless, this did not set the tone for the rest of the performance, a particular highlight being the ‘men in STEM’ sketch – short, sharp, tasteful – delivered with confidence and clarity. Some of the St Andrew’s Revue sketches fell into to clichéd traps – such as the infamous ‘take a chair’. In 25 minutes of original sketch comedy, acts like this seemed pointless and didn’t do the talented performers justice. St Andrew’s were at their best when they were playing into themselves – one of the highlights being the “cock doctor” sketch. It can’t have been easy kicking off a night of comedy in the sold out Gala theatre – but every member of the St Andrew’s Revue handled it with such ease and professionalism. The prefect way to warm the audience up for a night of spectacular comedy.

Next we had the Cambridge Footlights – ‘Horrible Her-stories’. This talented team created original and fresh sketches. In a run of solid sketches, with seamless transitions – the Footlights made it the laughs they were getting appear effortless. From such a strong selection, it is hard to pick out a particularly strong sketch. The Florence Nightingale sketch was delivered with such strong characterisation, had the perfect comedic pace, and, from the whole night of comedy, was a personal favourite of mine. Saying this, all I could hear in the loos at the interval were raves about the Tampax sketch – the success of this sketch was no surprise, as, after their particularly strong run, the Cambridge Footlights proved that

“these girls CERTAINLY can”.

Writing as a Durham student, I fear that my review of the Revue (!!) will appear biased. The comment made by St Andrew’s at the start of the show had got my heckles up so that regardless of their performances, the Durham Revue would automatically steal the show.

Thankfully, this is not the case. I need not lie in order to regain Durham’s nationwide standing. Their performances, both as talented individuals and as a troupe, has made writing this review easy. The audience were instantly set at ease by the energy, unity and sense of fun as the members of the troupe first appeared on stage; instantly engaging and captivating the whole of the Gala theatre.

The engagement with the audience, notably made by Ollie Taylor at the start and of course Bob Howat’s magnificent pilot sketch – indicated the level of quick-wit held by the Durham Revue, elevating this troupe from a mere ‘student comedy group’. They all oozed such professionalism, whilst maintaining such a sense of contagious fun.

From the ET sketch, to the hen night, to the chicken hat, to the ‘return train ticket’, to the Mr Tumble, to the prank patrol…the list goes on. Each act was executed to perfection. It was all funny without being cringe – achieving such a consistent run of sketches, all which trigger 500 real belly laughs, is no mean feat. My hat goes off and I really applaud every single member of the Durham Revue.

Special mention to the writers, Ben and Jack. Endearingly awkward in their navigation of opening the show, they set the tone for what was to be an incredible night. Their opening was cleverly written, the humour subtle yet un-mistakable, they, despite confessing themselves that they were ‘not performers’, held the stage with such a presence.

Daisy Hargreves, Leah Pinter, Tansy Adam, Henry Gwilliam, Bob Howat and Ollie Taylor all deserve a mention for their own individual performances last night. Oozing talent, fun and warmth, I can’t wait to see what they do next.

All in all, performing comedy in such a big venue is not easy, and must feel somewhat vulnerable – it’s success reliant on 500 people sharing your own sense of humour. This is why I was so impressed with all the troupe’s that performed last night. The St Andrew’s Revue, The Cambridge Footlights, and The Durham Revue. It really was a comedy fest – and as they all travel up to Edinburgh to perform this August, I have no hesitation in predicting their massive success both there and beyond. Every audience member is now lucky enough to be able to say “we saw them first”.