REVIEW: Children of the QuornTM

Megan from HR’s Children of the QuornTM was a sublime addition to The Spare Room’s line-up of staged productions and induced numerous moments of pure unadulterated joy for everyone presents a member of its audience. It opens with a setup resembling that of a crime scene, with a towel lying on the floor splattered with blood surrounded haphazard notes of money. A fallen chair lies at one end; there is no evidence of organisation whatsoever, simply pandemonium, which is frankly an 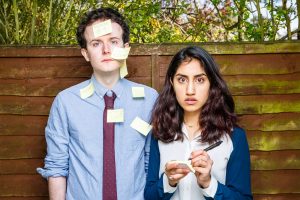 accurate introduction to the nature of the events of the following hour.

The audience is then transported to the same setting an hour earlier to observe the events that led up to such a chaotic outcome. We are introduced to Ambika and Andrew: a comedy duo with a plethora of self-deprecating jokes and awkward interactions to offer. The two operate in compatible opposition; Ambika delivers her one-liners and punchlines with a straight-faced demeanour reminiscent of April Ludgate from Parks and Recreation, while Andrew is clearly the earnest and loveable Andy Dwyer of the equation. The two decide to captivate their audience with the promise of a séance where they will communicate with a dead person, but much to Ambika’s discontent, Andrew dictates that they must only do so when such a dead person signals their willingness to communicate by ringing a bell that he places on a corner table. While the duo waits for the bell to ring, Andrew conveniently suggests that they put on sketches in the meantime, and upon Ambika’s agreement, the audience is invited to witness a series of hilariously self-aware skits and sketches.

The premise is set up and is incredibly exciting in itself; the audience braces itself in anticipation. However, while Megan from HR captures the audience’s attention with the promise of a séance, I was quick to realise that the excellence of their sketches meant that they didn’t really need a séance to retain the audience’s loyalty. The duo performs these sketches with a loveable goofiness and delusion, consciously playing along with the idea that the audience is laughing at them rather than with them. Deliberate goof-ups and bloopers are embedded into the script and executed brilliantly, and instances of improvisation were uttered and handled seamlessly. If anything, the member of the audience in the back row who couldn’t contain their giggles even moments after the punchline had passed speaks in itself for the standard of wit and silliness that took place on stage.

The indisputable camaraderie and companionship between Andrew and Ambika heightened the quality of the sketches, and the manners in which they bounced off of each other’s sense of humour was a pleasure to watch. The use of recurring ideas in 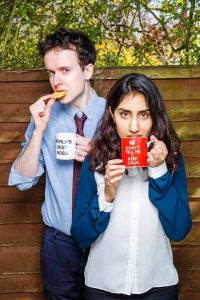 sketches, such as sketches that challenged the audience’s assumptions to do with time and current events, as well as a trilogy of sketches to do with a mother and teacher’s conversation about her daughter called Gollum, despite being recalled a fair amount of times, never seemed repetitive which is a remarkable feat when it comes to sketch comedy. To make the same joke twice and make it equally funny both times is a challenge, but Megan from HR takes up that challenges and sees it through. Another challenge lies in calling your audience “idiots” three times in the span of an hour an getting away with it, and they manage to succeed at that too.

Ultimately, the selection of sketches that made up Children of the QuornTM were witty and hysterical. Additionally, the building anticipation of a paranormal encounter with the dead was satisfactorily resolved in the end, cleverly binding the entire ensemble together and provided a fulfilling conclusion to an hour of continuous tears of laughter and resulting stomach cramps. If you do get a chance to catch Megan from HR’s shows in London or the Edinburgh Fringe, I would highly recommend doing so despite the small possibility that you’ll have to pay with your life as part of transaction with the Devil himself, and the fact that you will be called an idiot multiple times while people high-five at your expense. However, the payoff is definitely and completely worth it.