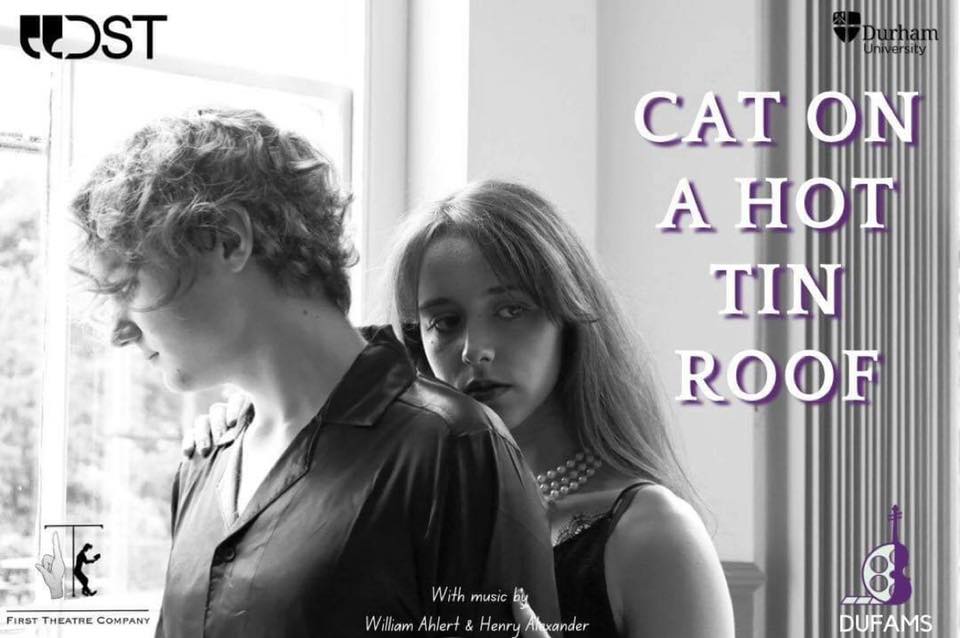 Tennessee Williams’ timeless classic ‘Cat on a Hot Tin Roof’ is injected with a new lease of life in First Theatre Company’s energetic and electric rendition, under the skillful direction of Rosa Aziz and Shehrzadae Moeed.

From the first line, the audience are drawn into the Pollitt family’s plantation as they converge to celebrate the 65th birthday of patriarch Big Daddy. Although the transition from 2020s Britain to 1950s America seems initially a little discordant (it could perhaps have been eased by some music to build an atmosphere), the play quickly finds its groove as the audience become accustomed to their new environment.

The real challenge of this play is sustaining the energy and pace during the lengthy dialogues that occur between pairs of characters. Firstly, the relationship between Maggie (Giorgia Laird) and Brick (Ben Johanson) is extremely rewarding to watch develop throughout the course of the play. In their perceptive and nuanced performances, Laird and Johanson beautifully lead the audience to comprehend the situation of these incompatible and incongruous characters, and it is testament to the skill of both actors that the audience really comes to understand the two characters.

Rivalling this relationship in terms of interest is that of Brick and Big Daddy (Jack Coombs), which is strikingly articulated through highly emotional performances from Johanson and Coombs. The performances tease out beautifully some highly pertinent themes, as well as the queer subtext of the play in the allusions to Brick’s probable relationship with Skipper. It is highly refreshing to see a father-son relationship explored with such perception, specifically though the portrayal of conflicting and anguished feelings between the pair.

In both of these pairings, the variations in tone and movement keep the audience engaged throughout, and despite occasionally falling slightly flat, it is in such scenes that the audience arguably find the most satisfaction.

Brilliantly tying the cast together, especially during the lager scenes, Eleanor Summer embodies matriarchal energy in her role as Big Mama, and providing further liveliness and vigor to the play. Stephen Ledger and Darcey De Winter contribute brilliantly to the family dynamic as Gooper and Mae, and it is pleasing to see the way in which every single character has been developed fully. When all onstage together, the heightened tension feels physically tangible, the consistent miscommunication and fragmented relationships of the Pollitt family brought sharply into stark relief.

The family are supported in by Nick Lemieux as Reverend Tooker, providing some much needed moments of comic lightness, and Hetty Mentzel as Doctor Baugh.

Framing such electric relationships and dialogue, the staging creates an atmospheric environment. The space is used extremely effectively, and especially to note is the two levels which create the impression of two rooms within the house. The divide is further aided through the expertise of the lighting design, with the harsher blue of the living room acting as a contrast with the warmer glow of the bedroom. This juxtaposition is most evident in the scenes between Brick and Maggie, who, despite being in conversation, occupy opposite spaces (Maggie in the bedroom, Brick in the living room) thus demonstrating a thoughtful use of space as symbolic of character. A smaller detail, but the use of the mirror in the corner of the stage (a domain almost exclusively occupied by Maggie) provides an extra dimension to the set, allowing the audience to see Laird’s facial expressions when she looks into the mirror.

The impression of the stage as merely two rooms in a much larger house is furthered effectively by lines delivered from offstage. Since the play takes place in a single setting, such innovative use of space and lighting, to the commendation of the technical team, creates interest in an environment that would otherwise remain the same.

Overall, ‘Cat on a Hot Tin Roof’ is an electric performance. It is credit to an extremely talented cast that the audience is able to witness a set of (arguably) morally questionable characters and yet genuinely empathise with single character on stage as they watch, helpless, as secrets become unraveled and the family crumbles apart.