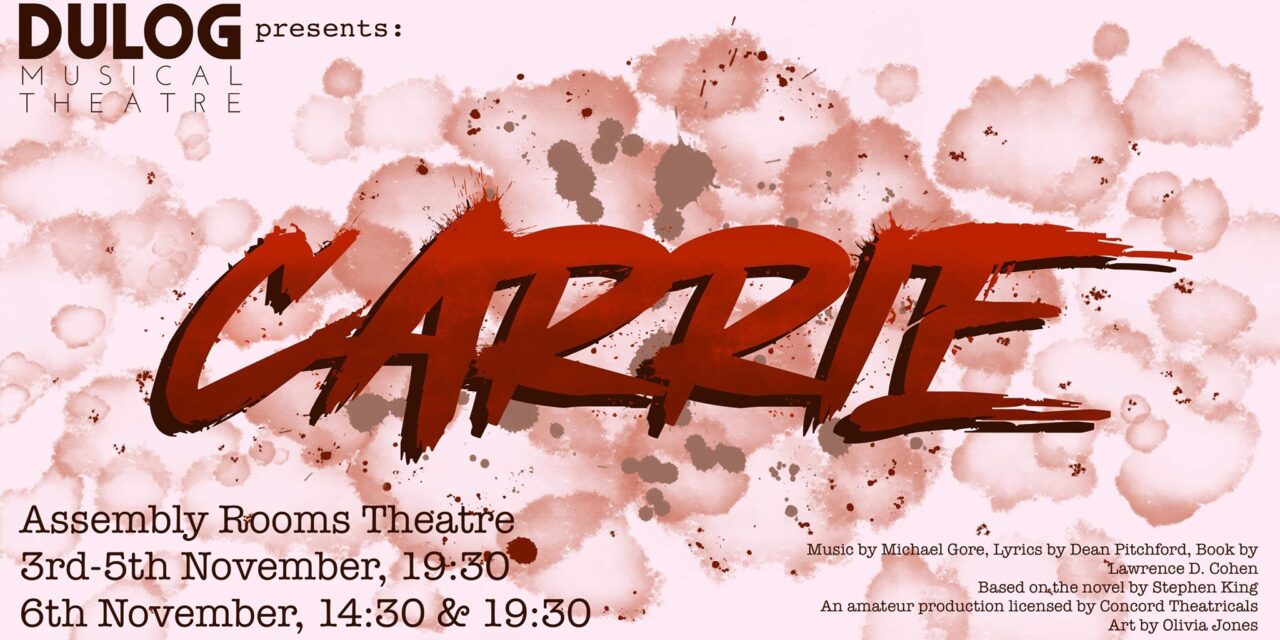 Following the publication of the classic book in 1974, and the iconic film in 1976, last night Carrie hit the Assembly Rooms Theatre stage with true style. This musical follows the story of Carrie, a young girl with telekinesis, who must suffer through bullying by her classmates, until she decides to put her powers to use. This modern adaptation created an air of tension from the very beginning, which was exemplified by the harsh white lighting utilised. Director Megan Cooper has done a particularly excellent job in casting in her directorial debut – every actor and actress suited their role perfectly.

Olivia Spillane as Carrie was – encompassed in one word – wow! Her vocal range is utterly incredible. Spillane’s rendition of the song ‘Carrie’ was a solid 10/10. The ending of ‘Why Not Me’ completely embodied Spillane’s singing. It just seemed so effortless and easy for her to sing. Her on-stage chemistry with Olivia Jones, who plays her mother Margaret White, and Lucie Fletcher, who plays Miss Gardner, was spellbinding. Spillane’s and White’s voices complimented each other perfectly during their multiple duets. I actually got goosebumps when Fletcher and Spillane sang their duet in ‘Unsuspecting Hearts’. This was all due to the amazing band, with their level of performance being consistent throughout. Evie Press’s portrayal of Sue was equally impressive – her presence on stage charismatic.

The motif of a police interview was a key focus during the musical, which was an interesting adaptation, as it progressed the events in Carrie from an outsider’s perspective rather than from Carrie’s point of view herself. The choice to cast Elysia Boyle as Chris Hargensen was one of the best decisions Cooper made. Her portrayal of Chris was classic mean girl – but in the best way possible. Boyle was able to act as vulnerable at the end of ‘The World According to Chris’, which briefly captured the double-edged sword of Chris, whose character I would have liked to see develop a little more. It would also be unfair to not mention Olly Stanton, who played Tommy Ross. Stanton gave a beautiful portrayal of Tommy. His chemistry with Press was electric on-stage.

The singing from the whole cast, despite a shaky start with harmonies in the first song (which can be attributed to open-night nerves), was incredible. The transitions into some songs and scenes were a bit jarring, however, once they got started, the quality improved. Despite this, some of the jokes, however, fell flat with the audience. Contrastingly, a humorous and notable performance was Bella Jessop’s character of George. The subtle comedic character was a great addition to the script, with jokes interjected at just the right times.

Carrie’s tech crew were also highly professional. A round of applause must be awarded to lighting designer James Goodall, whose lighting choices were extremely effective in creating suspense. One small technical fault that was noticeable was due to the microphones sometimes being very quiet, which meant that the audience could not always hear what the actors and actresses were singing. Also, nearer the end of the musical, there were some feedback problems. However, this barely took away from the incredible singing performances of the cast.

Overall, this was an utterly amazing show with an incredible cast and singing abilities. This is a theatre production to go and see.