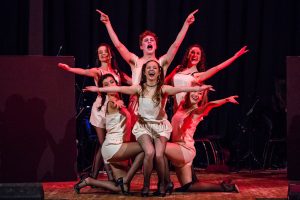 Kander and Ebb’s Cabaret follows the naïve American Cliff Bradshaw through his experience of the cheap yet frivolous world of underground 1920s Berlin, and the various characters he encounters. An energetic yet disturbing musical, conveying the rise of the Nazi Germany, Hild Bede Theatre have produced a highly difficult show to be proud of, though a few problems remain to be worked on in the following nights.

On entering Caedmon Hall, I was met with an array of cabaret tables at the front in addition to the expected auditorium setup. This seating arrangement succeeded in integrating the audience into the Kit Kat Klub atmosphere and achieved the voyeuristic elements that directors Isabelle Culkin and Claire Simonis were aiming for, especially in ‘Willkommen’, when the ensemble worked their way through the audience; I only wish this had been utilised more in the Klub numbers. Being sat on the very front table meant there was some discomfort in viewing the action during scenes on the side stage, so setting tables further back would be advisable. Scene changes were extremely slick thanks to minimalistic set, and I appreciated cast members executing the changes themselves as the Kit Kat dancers became an intrusive part of the ongoing storylines. However, the set for Cliff’s boarding house room I felt to be too bare. There was no desk so Cliff (Kane Taylor) had to use the typewriter (with no paper in) whilst sitting on the floor, which unfortunately led to some clunky movement. Regarding technical aspects, lighting was effective, with spotlights and reds used to emulate a dingy club, and minimal blackouts were gratefully received, minimising the audience’s detachment. The main issue was balance in sound levels between the band and the cast, though this could be aided with more projection and precise diction from actors. There were also moments where there was some feedback from the microphones, but they were quickly resolved and should be ironed out for the remainder of the run. 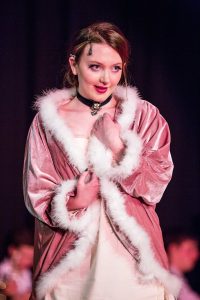 The choreography was superb; Rosie Dart and Megan O’Callaghan have created quirky sequences that incorporate a brilliant mix of innocent pleasure and aggressive undertones. One of the best examples of this was ‘Two Ladies’, which was also my highlight of the show, as Theo Holt-Bailey, Kate Russell, and Gayaneh Vlieghe were highly energetic, working fantastically as a trio with this choreography to pull off a truly entertaining number. All the Kit Kat girls danced to a high standard, although I do wish more direction was given to the female ensemble to generate individual charms as their characterisation did become slightly repetitive. Credit also must be given to Rhys Rodrigues and Emilie Harlow for musical direction, as the cast were vocally extremely strong. The band was excellent too, though for some numbers it did take several bars to relax into rhythm. Setting musicians onstage was a nice touch to again create immersion, but band members must remember that they too are in view – their watching of scenes, writing on scores and once or twice yawning did distract on occasion. 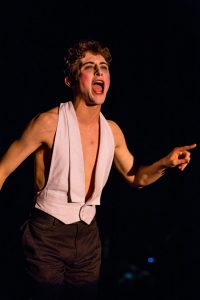 Katie Sterland put in an admirable and boundlessly energetic performance as Sally Bowles. I was personally moved by her truly powerful rendition of the titular number, which displayed her acting ability as well as vocal prowess. Her relationship with Cliff (Taylor) was blissfully innocent and refreshing in the midst of other troubling characters, but I did feel more direction would have helped to track their romance’s demise; the beginning and end points were convincing, but the journey was slightly blurred. Taylor also gave a beautiful vocal performance, and I enjoyed his subtle portrayal of Cliff even if it could have done with more variation. Frau Schneider (Lily Ratnavel) and Herr Shultz’s (Elliot Mather) relationship offered lovely chemistry and comedic moments as well as heart-wrenching insight into the realities of Nazi Germany, accentuated by Ratnavel’s emotional performance of ‘What Would You Do’. Both also connected well with Frau Kost (Rosie Minnitt). Minnitt intruded each scene with not only a ‘new man’ but comedic energy too. ‘Tomorrow Belongs to Me’, led by Minnitt, was impressive, with the ensemble joining in to create one of the show’s most unsettling transformations from light to dark. The stand-out performance was from Theo Holt-Bailey as Emcee, bringing fantastic physicality and vocal confidence together, making us feel welcome to enjoy the happenings yet utterly uncomfortable at times. The directorial decision for his almost constant presence added to this and really tied the show together.

Overall, HBT’s production of Cabaret is a highly successful juxtaposition of light-hearted fun and disconcerting Nazi themes, for which the whole team should be congratulated. Whilst there were a few first night issues, I can only imagine the cast and crew will settle into the next few shows, and I recommend you all to book your tickets to see this talented group before they sell out!

Cabaret will be playing in Caedmon Hall, The College of St. Hild and St. Bede on the 22nd-24th February at 7:30pm.