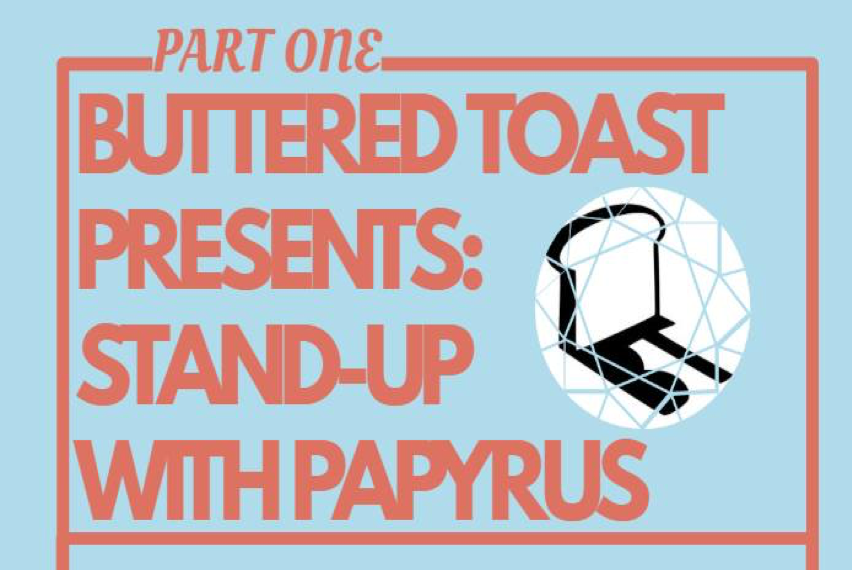 Izzy Swaney is entertained by an eclectic mix of comedy performances  from Buttered Toast Theatre Company.

Stand-up comedy returned to the bar at St. Cuthbert’s Society on Wednesday 23rd October with Buttered Toast’s evening of comedy in aid of Papyrus. Taking place in the back bar, a somewhat unconventional but by no means unsuitable venue, the show was an eclectic mixture of achingly funny, unbearably awkward and charmingly relatable. Split into two halves, with eight performers, there was something for everyone, but occasionally nothing for anyone. With several comedians taking the microphone for the first time, it truly was a mixed bag. Themes for the evening were split evenly between anecdotal funnies and slightly risqué topics, the former bearing the best laughs.

The evening began with Janina Arndt and her love of scones, which was incorporated into a relatable monologue about Durham landlord woes and the trials involved with ‘starting’. While not the stand-out act of the evening, credit must go to Arndt for contending with a small audience (later increased significantly as the evening went on) and noisy bar revellers. Moreover, bonus points must be awarded for her use of props, including real scones and whipped cream. Fraser Logue followed, bringing with him postgraduate finesse and a fantastic ability to play off the crowd. He continued the Durham-centric theme with a witty and perfectly paced set of anecdotes from his life, wrapped up in a quintessentially British package of self-deprecation. An excellent orator, he had the audience engaged and laughing within minutes.

Only a true comedian could follow such a strong act but Serena Smart did not crack under the pressure. Something of a Durham comedy prodigy, Smart perfectly captured the essence of Durham culture by addressing the glue of our community – Oxbridge rejections. Moving effortlessly into a hilarious anecdote from her travels in Europe, she was difficult to distinguish from a true professional. Truly the stand-out act of the show! Closing the first half was Lahiru Rajapaksa; after a strong start, his set quickly descended into awkward and needlessly offensive jokes. Thankfully, it was mercifully short.

The second half was opened by Henry Milard; he began his set somewhat hesitant but delivered a sharp and amusingly pointed commentary about Thailand. However, it seems his nerves got the better of him and he spent the rest of his set digging a hole for himself with a painful joke which I don’t think should be repeated. Moving swiftly on, the saviour of the second half undoubtably came in the form of newcomer Jack Simmonds. Despite a shaky and nervous start, Simmonds produced a charming, relatable and entertaining set based on his coming-out story. Perhaps my favourite aspect was his ruthless impression of his mother and her ‘middle-aged mum’ friends – it was a welcome change of pace and gave the audience a good laugh.

Kevin Muendo’s set provided a contrasting experience; while it was not bad at all, it felt incoherent and served up an eclectic mix of topics: Brexit was mentioned. Brexit should never be mentioned. Closing the show was Josh McCulloch, who brought an innovative approach to stand-up; having had a few drinks in the bar, he proceeded to face the wall for the beginning of his set. He was entertaining, but I’d be lying it I said it was due to the strength of his comedic persona. There were some gems hidden amongst his ramblings, but not enough to justify his lack of professionalism.

Overall, I left the show pleasantly surprised; stand-up can be incredibly polarising, but for the most part the content was enigmatic and expertly told. Hats off to Buttered Toast for showcasing some new and genuinely brilliant comedians!