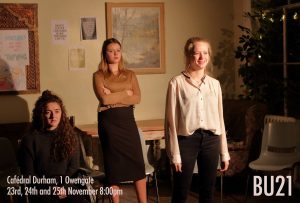 I wasn’t entirely sure what to expect from Castle Theatre Company’s BU21 this evening. Aside from a personal love for the publicity, I knew nothing of the play, other than it advertised itself as ‘verbatim from the near future’. After watching the entire lovingly produced show, I feel conflicted about the play itself. There were clashing tones and odd dialogue choices. I’m also personally unsure about the concept of a show that attempts to emulate verbatim theatre, based upon interviews of real-life terror attacks. However, that should not detract from the excellent show that I saw, and CTC’s production is a confident piece of student theatre that is absolutely worth the watch.

The production, as a whole, was incredibly strong. The venue was an excellent choice, as justified in the director’s note by Jennifer Baker, it really did feel like a cosy support group room for a group of disgruntled individuals. I loved the decisions to use the plastic grey chairs, I loved the posters on the walls, and I thought that the costume choices were mostly appropriate. I was unsure about the blocking at certain points, perhaps partly due to moving a wheelchair into a performance space that was relatively narrow. It unfortunately led to one or two awkward moments, such as the scene where the characters Ana, Alex and Graham are all crammed in what appears to be two thirds of the space. These moments were few and far between, however. My particular favourite sequence of movement came in the opening, where characters rotated around in the space to make way for monologues. Director Jennifer Baker and assistant director Holly Orchard have clearly put a considerable amount of thought into the production, and it certainly paid off. 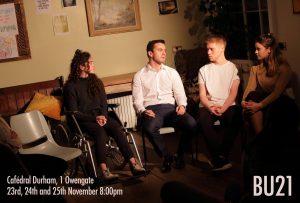 The acting ability of the cast is not to be underestimated. Every character was incredibly distinct, and utilized the verbatim style the piece emulated well. Every actor on stage had a stand-out moment for me. Grace Longman as Floss was excellent, from the tiniest mannerisms to the awkwardness following her flashes of dark humour, and kept her character believable throughout. I was very invested in her storyline, perhaps because personally she felt the most relatable. Mo Hafeez as Clive brought a sweetness to a conflicted person that was so heartening to see. Hopelessness and despondency is hard to maintain, especially throughout monologues, but Catherine Wright as Ana did so with ease and a quiet, contained sadness. Both Adam Evans as Graham, and Florence Petrie as Izzy, balanced out the ensemble with outgoing and confident characters, and while occasionally bordered on straying from the verbatim style, consistently managed to bring it back to a naturalistic tone. Despite being very engaging, I was a little confused by Jake Hathaway’s Alex, though probably through no fault of his own. The narration style mixed in with the faux-verbatim format was difficult to differentiate between as an audience member, and something I was absolutely not prepared for. Arguably, he had the hardest job stylistically. While he was, on the whole, entertaining to watch, I was not entirely convinced by his performance as an overseer – his performance within the ensemble was much more cohesive.

Whilst the lighting itself appeared fairly basic, it worked particularly well for the intimate atmosphere the production was trying to create, and technical director Emily Hicks should be congratulated. It was difficult at times as dramatic shadows were cast over the actors’ faces at certain points, but it was not distracting. I had a little more trouble understanding the musical choices. It was admittedly hard to hear during one of the transitions, but what felt like heavy base in the music didn’t translate to the half-humorous, half-harrowing atmosphere created by the play itself.

There are some excellent moments in this show, times where I was invested in every character’s story. The cast and crew have done themselves proud. Despite my personal ambivalence towards the script, BU21 was a fantastic show with ignorable flaws, that was absolutely worth the watch.

BU21 will be playing at 8pm at Cafedral on the 24th and 25th November.