REVIEW: Bring It On

Rebecca Kingston is left feeling energised by the Collingwood Woodplayers’ production of ‘Bring It On’.

Much like the movie it is based on, Bring It On tells the story of high school senior Campbell, captain of her cheer squad and passionate about cheerleading above all else. Having been forced to relocate schools to a far less privileged area, she struggles to find her place. The Collingwood Woodplayers deliver a peppy, energetic and quite simply fun production of the show, fully unafraid of being cheesy, which kept the audience smiling and laughing throughout.

The playful and lighthearted tone of the show is set from the opening number, which features cheer stunts, clean choreography and flips. Director Molly Taylor and and assistant director Aaron Thompson made good use of the space available and used props and set sparingly and efficiently, which enabled smooth transitions between scenes and kept the energy up so the audience remained engaged. Taylor and Thompson also did a great job in bringing out the comedy in the

show, keeping the tone of the show cheery (no pun intended) and happy throughout.

The cast were entertaining and energetic, showcasing a range of different characters and voice types. Whilst all cast members proved to be extremely capable singers (an impressive feat with such a large amount of soloists), particular standouts of the evening were Louise Lovatt (Danielle), Becky Brookes (Bridget) and Tamzin Kerslake (Eva). Lovatt showcased genuine and emotional acting and her powerful vocals blended beautifully with Ashleigh Boyce’s (Campbell) beautiful voice. Boyce herself seemed shy at first but grew in confidence as the show progressed. Kerslake perfectly portrayed all aspects of her character and showed real acting and singing capabilities. Brookes stole the show with perfect characterisation in singing, acting and dance and formed the real power couple of the evening with Louis Mayo as Twig Sab.

The supporting actors all gave great performances as well, really playing into the comedy of the show. The ensemble were peppy and dynamic and brought great energy to the group numbers. It was particularly great to see the involvement of Collingwood Cheer, who performed fantastic stunts and wowed the audience – it would have been nice to see even more of them (they were often at the back whilst the cast danced in the front). The choreography was effective and fun, particularly in the opening number of each act, and showcased different styles based on who was dancing.

The band, conducted by Shayon Banerji, was faultless and it was really nice to be able to see them, off to one side of the stage. The balance between the band and the singers was good and credit must be given to the technical team, lead by Will Alvin Dickins, for a particularly well-run first night. There were only minimal mic issues and the lighting design effectively helped set the 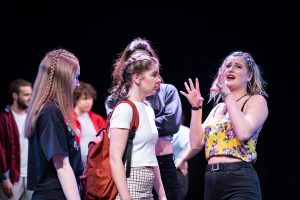 scene. Particularly original was the use of two projection screens on either side of the stage with were used instead of set to let the audience know where the action was taking place, as well as being used for comedic effect from time to time, which proved how well thought-out every aspect of the production was.

The one criticism I have of this production is that it excessively feeds into stereotypes. The show itself is partly to blame for this, allowing for little character development in some of the parts and a superficial handling of potentially sensitive class issues. However, more could have been done to veer away from clichés; for instance, the slightly problematic representation of a transgender student which, instead of conforming to stereotypes, could have been given more substance (although this is not the actor’s fault, who himself was great at entertaining the audience and making us laugh).

Overall however, this is a fun, uplifting show where all aspects of the production really come together to create a corny, happy teen rom-com. It is an easy watch, and doesn’t try to force some darker, hidden message on the audience. I would recommend this show to anyone who wants a fun, entertaining evening out to forget about summative stress and just relax watching the superficial problems of a high school cheerleader, with some great songs and fab stunts.

Bring It On will be playing in the Mark Hillery Arts Centre at 7:30pm from Friday 15th to Sunday 17th March.