Laura Wade’s Breathing Corpses is a murder mystery that starts out on a comic level before heading steadily towards a far darker message. The play takes its title from Sophocles (‘When a man has lost all happiness, he’s not alive. Call him a breathing corpse.’), and the cast handled the heightened emotional nature of the episodic scenes with sensitivity and engaged the audience wholly throughout the production.

The performance took place in the Cassidy Quad in St. Chad’s College, and the production team took advantage of the ample space by using two separate small raised stages. Given the episodic nature of the play, this helped the audience to recognise the that there was no relationship between characters in different scenes, and therefore meant that they could more easily piece together an understanding of the subtly mentioned facts pertaining to the deaths. This also allowed one stage to be lit while the other was blacked out so that set could be removed from stage, although at times the transition between scenes could have been smoother as actors consistently turned around to reset their stage before the blackout.

One incredibly well-executed technical aspect was the use of sound: numerous sound effects were used throughout the 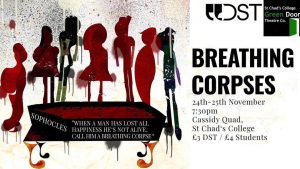 production, including a dog barking, and they were always punctual and believable. The costume was considered and thus effective; Lucas Walker’s Jim had a notable costume change between scenes, from a bright red plaid shirt to a dull baggy t-shirt, epitomising the character’s mental degradation in response to discovering the body of a dead woman. The use of props was somewhat problematic in the case of Freddie Parsons’ Ben, as there is an illogical moment where his character took off his t-shirt due to the heat, only to replace it with a long-sleeved shirt minutes later with the argument that he did not want to go upstairs to retrieve a t-shirt when there was clearly one still onstage. The most notable detail of set design was the comparison between the first and final layouts of the bedroom that Helena Baker’s Amy intended to clean; there were small differences that the audience enjoyed examining at the start of the scene, and a few of the changes were a little more significant, such as the addition of a belt on the floor reminiscent of Isobel Clarke’s Kate’s death earlier in the play.

The cast gave strong, intelligent performances, almost always utilising a range of vocal techniques that enhanced the realism of their dialogue and engaged the audience despite the intense emotional nature of the play’s content. Clarke and Parsons were able to handle a particularly heightened scene that turned to physical violence, and this was dealt with very effectively; both actors achieved a highly believable fight scene that, placed at the climax of the play’s narrative, was somewhat cathartic for the audience given the harrowing nature of the play’s subject matter. However, at times the dialogue in this scene could have had more variation in pitch and volume to add to the emotional depth of the relationship and allow the audience a moment to reflect on this scene’s placement within the greater narrative. Will Bloor’s Ray was likable in his ease and slight lack of awareness; the boiler suit he first appears onstage in only served to cement this charm in the audience’s mind, as was his eagerness to eat a bacon sandwich. The blocking of each scene was exceedingly smooth, and each unit of actors moved together seamlessly during scenes, creating a real sense of chemistry.

Baker’s Amy and Lily Britton’s Elaine were notable for their outstanding command of the audience’s attention; both actors had lengthy pieces of dialogue that were performed with integrity and an awareness of the characters’ innate unease. Their effective use of gesture to accompany their range in pace and tone added nuance to the existing dialogue. Both had moments of comedy that were very successful and added a little light relief to an otherwise disturbing narrative, saturating their characters with charm and bringing an amazing amount of energy into their scenes.

Director Jenny Shpeter and her team have produced an engaging piece of theatre; the intensity of the emotional exploration is made more poignant by the moments of comedy, leaving the audience feeling reflective and eager to piece together the mystery long after departing.

Breathing Corpses will be playing in the Cassidy Quad in St. Chad’s College on Sunday 25th November at 7:30pm.