Jake Hathaway slips across the ice to the City Theatre to see LTC’s rambunctious production. 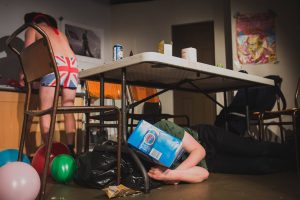 Boys, by Ella Hickson, is an interesting play. Interesting because it deals with a difficult subject matter in an unusual setting, interesting because of the level of naturalism demanded of the actors, but more than that, interesting because it succeeds in being, I believe, the play this term most relatable to a Durham student audience. The play introduces us to the six characters, three students at Edinburgh University, and three Scots, and focuses on how they are connected, but also what separates them now that the time has come for them to go their separate ways. We are provided with a view of one last day in a flat where the metaphorical and literal detritus of their lives is given a final chance to break them down utterly before they can escape it (or not). Make no mistake, this play is absolutely hilarious, but it certainly also manages to get dark.

Upon walking into the City Theatre, you are presented with a classic messy student kitchen, covered in rubbish, beer bottles, and the unconscious form of what later turns out to be Cam (Hamish Lloyd Barnes). This opening fresco is detailed lovingly by Producer Damson Young, and  Assistant Producer Caroline Mosimann, providing a dynamic scene for the characters to navigate, and subsequently, trash. This is frequently accompanied by a track list that probably wouldn’t go amiss in Lloyd’s on a Wednesday, in addition to smooth interwoven scene transitions through dynamic lighting shifts by Technical Director Emily Hicks.  This provides a vibe for the rest of the play that Director Hetty Hodgson and Assistant Director Alice Clarke play off fantastically with excellent pacing; the two-and-a-half-hour show is utterly gripping throughout, although there are some moments that the audience could potentially be left to sit with for longer before continuing onwards with the plot.

The cast are uniformly excellent, each displaying fantastic comic timing at various points. Benny (John Broadhead) the moralizing killjoy of the group, or so it may appear, is in many ways the most relatable character, and his refusal to bend to the debauchery and nihilism of his housemates is fantastically realised by Broadhead. Carrying the serious undertones whilst comedy abounds is something Boys does excellently, and, for the majority of the play, this responsibility is carried comfortably by Broadhead. The frantic energy of Jamie Prowse (Timp) was matched only by effervescence of Gayaneh Vlieghe (Laura) with fantastic chemistry between the two both during the ‘highs’ as well as the more serious moments. The troubled prodigy Cam, portrayed by Lloyd Barnes, gets a rough ride which is portrayed with aplomb, although I’m pretty sure no one’s face is supposed to turn quite that shade of purple! Although Vlieghe, Prowse, and Lloyd Barnes’ accents were generally well realised throughout, particularly during some of the incredibly pacey dialogue, during some of the slower sections it could skip around the British Isles – this is ultimately a minor gripe and really didn’t detract from the show overall.

Ed Chapman (Mack) and Angharad Phillips (Sophie) have the unenviable task of bringing their respectively incredibly complex characters to life – and it’s safe to say that they nailed it. Chapman’s entrance and the response elicited from Broadhead, Lloyd Barnes, and Prowse was a point of absolute brilliance. Phillips throws herself into the rapid emotional shifts demanded by Sophie with utter conviction: these two will keep you guessing right until the end.

At this time of year it’s dark outside, but it’s a lot darker in the world created by Lion Theatre Company’s Boys. However, within that darkness is genuine warmth, comedy, and a more relatable, gripping entertainment than you are likely to find slipping over on Elvet Bridge. The combination of actors so perfectly suited to their roles, and a production team like this one comes along rarely. If you are a student, particularly the type more likely to spend an evening watching Fresh Meat than heading to the theatre, make an exception and see this show- you will not regret it.

Boys will be playing in the City Theatre on the 14th and 15th December at 7:30pm.