Eleanor Diggle puts her objections to Willy Russell’s playtext to one side, and enjoys HBT’s telling of the famous tale. 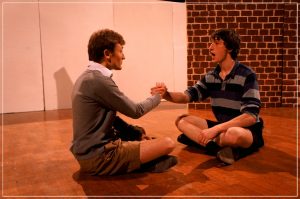 Blood Brothers, written by Willy Russell in 1983, is the story of twins born to a working class single mother, who gives one of her children to a wealthier woman unable to conceive. It follows the lives of the two brothers, who become close friends – unaware of their familial ties. The work is originally a musical, though HBT’s production was the play version, which omits the musical numbers.

I came to the production with my own personal preconceived niggles about the play – I feel its dialogue is very contrived, and that Russell is heavy handed with the foreshadowing. Therefore, when I say that Hild Bede Theatre’s production of Blood Brothers is enjoyably comedic, emotionally charged, and deeply tragic, you should know that it has very little to do with the text itself, and everything to do with the cast and crew.

The cast was generally very good, and it was clear that they have worked very hard to get to the standard of performance that they achieved. Any actor that played a child did an excellent job of portraying their age through their physicality, and it was clear how old they were in each scene, despite minimal costume changes. Olivia Ballantine-Smith, who played Mrs. Lyons, was excellent at showing a level of manic desperation that never became too ham-fisted or over the top, and made her feel somewhat sympathetic in her portrayal of a desperate, mentally ill mother. Sophie Crawley, who played Mrs. Johnston, struggled initially to find her stride, but once she found it, she shone through as a very sympathetic and believable character. Lou Webster, who played love interest Linda, was clearly having an excellent time in the role, and if she could reel in her animated energy a little bit more as a fourteen-year-old, her performance would be flawless. Hebe Ellison, who played the narrator, added an almost frightening overtone to the performance, and as an audience member I felt very acutely like I was under the microscope.

However, the truly outstanding performances came from Kyle Kirkpatrick and Matt Lloyd, who play Mickey and Eddie (the two brothers) respectively. The two of them brought an incredible energy to the stage that lifted the performance from good to excellent. During Mickey’s childhood, Kirkpatrick embodied a wonderful sense of childlike glee and mischief, and it was genuinely saddening to watch him lose it as he grows older. The brothers also had an excellent sense of comedic timing that brought some much needed levity into a fairly dark play, and every joke hit its mark. The dynamic between the two is really at the centre of the story, and it was clear that they had worked with the director extensively in order to make it feel as real and immediate as possible. Without spoiling the ending, it must be said that as their relationship deteriorates, the audience were made to feel, in a very tangible way, the sadness of two close friends growing up and apart. 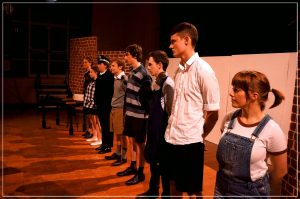 As a director, Alexander Marshall was clearly very interested in the relationships in the play, rather than exploring any overarching themes. It is possible to get extremely caught up in classism in Blood Brothers, but he did not go too much into detail. He has emphasised far more intently the moments between the mothers and their children, and the two brothers. The staging was often quite simple but effective, occasionally spilling out into the audience and onto the sides of the stage. Unfortunately, due to the physical limitations of the space, if the actors were sitting down on the stage it could be quite difficult to see what was going on, even from just three rows back. This could be solved by moving the moments upstage a bit, but then the intimacy with the audience would be lost, so I do not think that it would necessarily be worth changing. The pace was usually very good; though it did drag its feet in places, it never slowed down so long that the audience became impatient. It was clear that Marshall has thought about the details of this piece very carefully, and hardly anything is accidental.

Technically, the performance is also quite sparse, with no scene changes, few blackouts, approximately ten lighting queues, and five sound queues. This stripped down, back to basics theatre meant that it was very easy for the audience to focus in on the characters being presented on stage. A few more sound queues could have lifted the performance, particularly during the very non-naturalistic moments in which the narrator is speaking. Few props were used, which I think fits in very well with the overall atmosphere presented, though the use of a fake, plastic baby felt somewhat incongruous; I feel it would have been more effective to simply mime it. Overall, however, the technical aspects are well thought out and enhance rather than distract from the performance.

Overall HBT’s Blood Brothers is an evening well spent, and is entertaining, emotional, and engaging. However, do remember to bring a shawl; the theatre gets a bit chilly.

HBT’s Blood Brothers will be playing on the 17th and 18th November at Caedmon Hall, The College of St. Hild and St. Bede, at 7:30pm, with an additional matinee performance at 2:30pm on the Saturday.