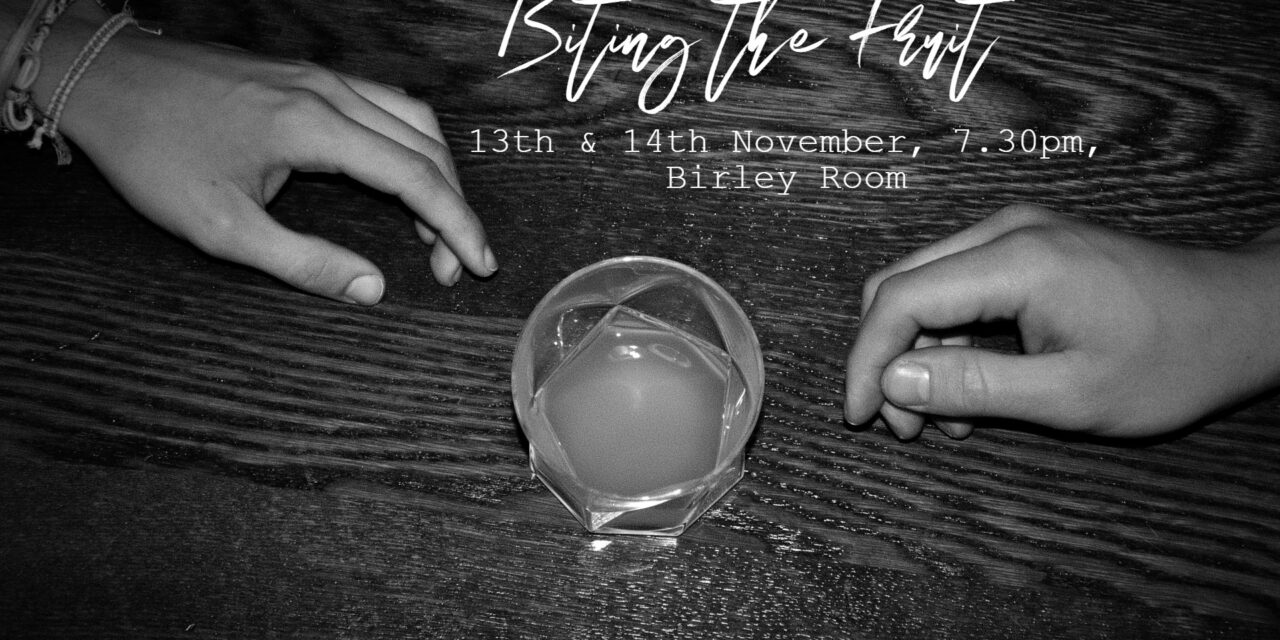 First Theatre Company’s ‘Biting the Fruit’ is an original student-written play wrriten by Ben Willows and directed by Brooke Boal and Maddie Hurley, set to the backdrop of the AIDs crisis and Thatcherite Britain. Grappling with power and Queer love with a stark yet delicate touch, the razor-edged writing and brilliantly subtle acting of this play is something to be reckoned with.

Within the Birley Room, ‘Biting the Fruit’ transports the audience to a stuffy space of a private club where a nervous Conservative MP enters and waits before hearing a knock on the door. The set is simplistic and allows the play to speak for itself, with only a table, candle and two chairs accompanied by a smaller table plentiful with alcohol. A strange sense of business and formality is maintained whilst the candle and alcohol make for excellent tension between the clashing characters. This intimate (and almost claustrophobic) setting feels perfect for George (played by George Thomas) as he is confronted by his own repressed history as well as the reality of HIV/AIDs and David’s fears of Section 28. The Birley Room feels constrictive for David (played by Diogo Fortunato) which works to the character’s advantage as he moves around the space liberally – an interesting directing choice which reflects David’s need to break free of the restrictions placed on him as an openly Queer person in 1988. However, it could be felt that the possibilities for more adventurous lighting and sound could have perhaps been further explored, although the one clear change of lighting felt purposeful and compelling enough narratively when it did arrive.

Perhaps the most enthralling aspect of ‘Biting the Fruit’ is its unashamed Queerness and portrayal of Queer history with a gorgeous writing style which surprises in the best way possible. Although to begin with this play may feel initially like a slow burner, it eventually kicks into gear hard with explosive dialogue and acting. Willows’ writing feels well-crafted and character driven, turning power dynamics on their head from moment to moment and keeping the audience hanging on emotional tenterhooks. This play is powerful in its exploration of Queer love, conflict, and pain – staring Section 28 square in the eye and refusing to back down.

Thomas shines in his role as George. His prowess and ability to consistently add naturalistic mannerisms to his character build a realistic portrayal of a man who is deeply repressed and dreading an oncoming storm. Small actions and decisions in his acting catch you off guard, and rare moments of playfulness and empathy are tenderly juvenile and clumsy as he remembers and tries to bury his time as a schoolboy with David. Despite the beginning of his performance feeling sometimes a little static, the heights of his acting ability are impressive and greatly emotive. Thomas as George feels raw, authentic, and never caricatured.

Fortunato is an utter joy to watch act. With a marvellous and wise tongue in cheek and heart-breaking determination and care, Fortunato plays this character to perfection. There were sadly some moments where diction and projection were issues in the delivery of Fortunato’s lines, however this can easily be overlooked by his great stage presence. His subtle comedic and dramatic timing lean into lovely moments of light and shade in Willow’s writing.

Both Fortunato and Thomas are both talented actors who yield striking chemistry as they explore the conflict of power, love and self-preservation.

Overall, ‘Biting the Fruit’ is an urgent and fearless play addressing a part of Queer British history in an engaging and gripping way. All elements of production appear thoughtful and well-versed in what works. An absolute must-see.