Cuth’s Drama Society’s production of Birdland was a triumph, bringing the real struggles of a famous artist to life into the realms of Durham. As the play progresses, the audience witnesses the final week of famous singer Paul’s tour and the tough reality that he, and consequently all those around him experience. Bringing to light issues of mental health, anxiety and mental breakdown surrounding fame, the show is extremely relevant to the damaging nature of the music industry and money’s overwhelming power to facilitate the gradual unravelling of an artist’s sanity. 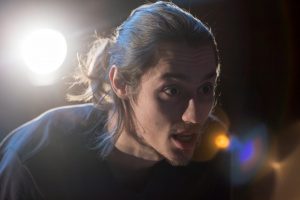 Walking into the Durham Union Debating Chamber on Palace Green, music filtered through the room creating a relaxed vibe. The sudden darkness and eerie silence that signalled the beginning of the show illustrated the intense and shocking work that was to come. There were several key moments which were particularly haunting, namely Paul’s confession that ‘sometimes [he] feels like cancer’ which left the audience in stunned silence as the scene came to a close. The intimate scenes between Paul and the individual characters successfully displayed each individual and unique relationship he shared. These contrasting relationships highlighted different aspects of Paul’s unravelling psyche which was an incredibly effective way to subtly inform the audience of this complex character. The direction by Charlotte Hartley and Eliza Alice should be applauded for creating such moving moments of reflection, intense vulnerability and madness.

The acting was of a very high level, and Alex Ottie as lead character Paul was exceptional. While slightly more character development would have made the change of Paul’s character more defined and intensified the impact of Paul’s progression into his insanity, his performance was otherwise spotless. He fully captured the essence of Paul’s inner struggles and anxieties. Ottie’s brilliant performance caused the audience to despise him and the cruelty he inflicted on those closest to him. The multi-roling was largely effective with only minor slips in the continuity of accents. Issy Flower, Freya Hall and Will Bloor moved between characters seamlessly and added much needed moments of humour after periods of deep, hard-hitting drama. A particular highlight was Will Bloor’s portrayal of one of Paul’s super fans from Dundee which was carried with impressive 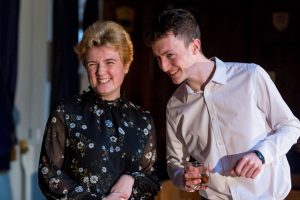 commitment to the character and accent. Issy Flower created similar humour at times that were much needed and carried them off with impressive conviction and delivery. Freya Hall must be commended for the beautiful subtleties and nuanced expression she brought to her characters.

Having the lighting shine straight onto the audience created a harsh, almost blinding spotlight on the scene which was incredibly effective. It made it appear as though the actors were stuck in the spotlight representing how trapped Paul felt in the corrupt life that he was unable and perhaps unwilling to leave. This placement of lighting also formed shadows along the back curtain of the stage, forming silhouettes of the actors throughout the play. Lighting was used well consistently but a particularly intimate scene where Paul finally tells the truth to his best friend, Johnny, was where it really shone. The moment of truth was signalled by a change from a cool blue light to a warmer yellow one which symbolised Paul’s momentary decency. The set consisted of four black blocks that were very versatile, helping to facilitate quick scene changes.

My main criticism of the play was its length. Scenes tended to drag on and the general pace of the show remained a tad sluggish. Despite this, the acting was of a very high quality and the production was very moving. Overall, the play is very thought-provoking and an excellent display of dramatic talent by actors and prod team alike.

Birdland will be playing in the Durham Union Debating Chamber at 7:30pm on Monday 4th March.