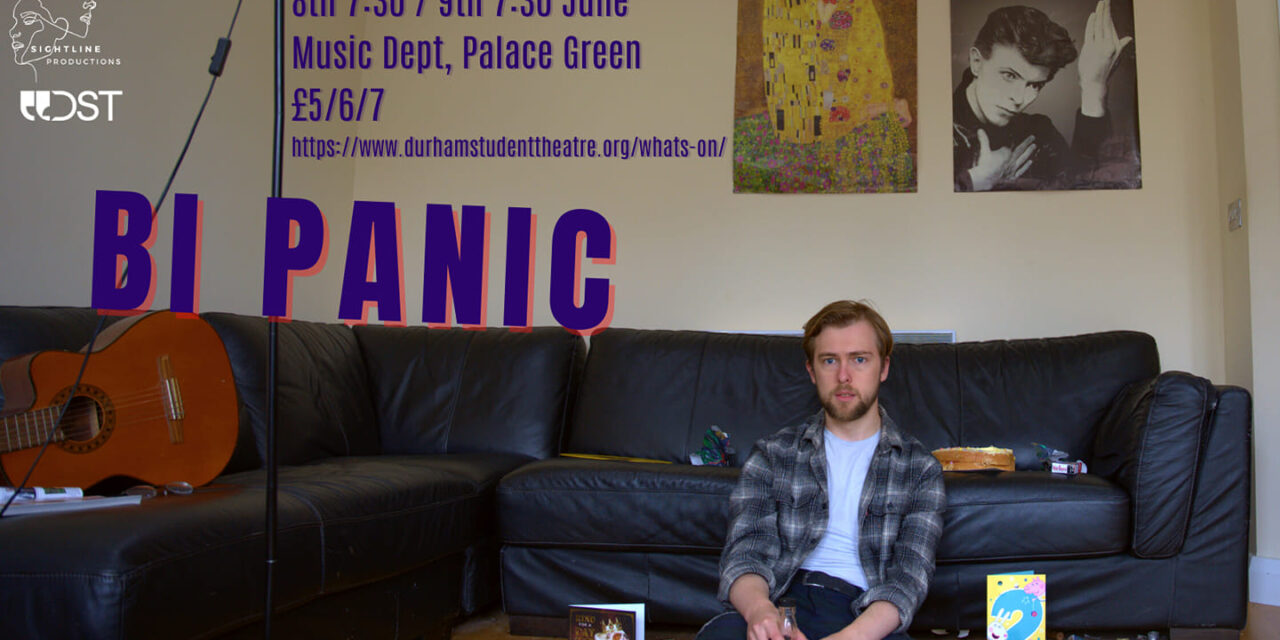 ‘Bi Panic’ is a one-man show that explores Bobby’s bisexuality and its impact on his family, friendship, relationship, masculinity and turning 25, all underpinned by a Bowie obsession. The play, directed by Jennifer Lafferty and written by Ben Willows, has the hope (as Willows put in his writer’s note) to provide a truthful portrayal of bisexual men in fiction. The play does a stellar job in portraying Bobby’s perspective and journey he goes on to come to terms with his bisexuality, but would be hesitant to claim as representative for all bisexual people.

The Music Department venue worked well for the intimate nature of the show. The empty cigarette pack, stacks of vinyls and collection of books genuinely made the set feel like a 25 year old’s flat. I must commend Daisy Robinson (Stage Manager) for her accurate sourcing for set, props and costume. The props chosen for the show were utilised impeccably well as they were vital in illustrating Bobby’s character (played by Ben Willows) seen from the very start of the show with the Colin the Caterpillar cake. The set in particular allowed for swift location changes which facilitated Bobby’s clever use of the space. Without a doubt, Willows delivered a standout performance as he was able to captivate and hold the audience in his solo show. I was particularly impressed with how Willows conversed with the audience and the other characters and his ability to switch between was seamless and engaging. It was a real treat to see Willows float from charming to flirty to angry to panicked which especially maintained the pace of the show in its peaks and valleys.

Lighting and sound was cleverly used in the show to portray Bobby’s emotions and to capture new locations. The subtle lighting changes were instrumental in grounding the audience in the new location, focus and characters. The recurring use of a soft yellow spot helped to distinguish moments of high emotion and intimacy with the character. A standout lighting moment has to be in the toilets, where there were intense flashing coloured lights accompanied by Bowie blaring in the background. It really captured Bobby’s sexual desire and his fantasties. Throughout the show, the best of Bowie is used to illustrate Bobby’s admiration. Bobby heavily compares his achievements and milestones with Bowie and music was used cleverly to illustrate how present the comparison was in Bobby’s mind, explaining why he is panicking so heavily. The music worked well with the pace of the show and Bobby’s movements and actions. I must commend the operator for getting the moments right by responding well to Bobby and the audience.

Overall, Bi Panic was a greatly entertaining show. For the most part the show is extremely funny but there are moments that leave you feeling such emotion and anger on Bobby’s behalf. The directing team, led by Jennifer Lafferty, did such an amazing job in making Bobby come to life and demonstrating the nuances of Bobby’s bisexual life. It was a beautifully naturalistic performance that really captured the voice and tone of a man struggling in his sexuality and his awkwardness in trying to figure out where he belongs. The writing’s natural tone allowed the audience to truly see and understand Bobby in his vulnerable state, talking to us directly. Whilst the show’s specificity to the cis white male experience in straight relationships left me wanting more, it provided me with the space to reflect on my own identity – and that is always invaluable.

Bi Panic is performing at the Music Department until 9th June