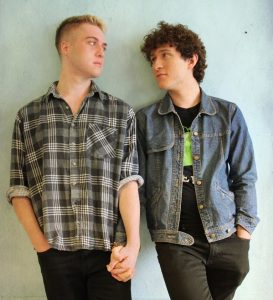 As the sun continued to burn over Durham during the final few hours of our longest day, a small group shuffled into the shade to witness Hild Bede Theatre’s opening night of Beautiful Thing. With a small but fully formed cast, HBT have picked a cracker of a play to end the year with. Although centring itself upon young homosexuals in the 90s, Luke Blackstock has directed his creation to be a more heart-warming depiction of working class community and the relationships which contribute to the development of a teenager.

Blackstock has fully grasped the opportunity a large space such as Caedmon Hall offers, to create a long set which offers the audience an immediate X-ray-style view of a street on a London council estate. With no wings, the actors must remain on stage for much of the play, and scene changes have to be fluid, something that they master gracefully. A minor initial hiccup could be the over-reliance of music, which caused the opening to drag smewhat. Layla Chowdhury, as Leah, the ‘best friend’ character, who has been excluded from school, spends the vast majority of the play behind her closed door, slowly wasting herself into a bored desperation.  Although mildly risking upstaging her colleagues, much of Leah’s story is told in silence from the background fringes of the play, while the main strand of the plot is progressing. Chowdhury grasps the bottled energy and non-vocalised anguish of a fifteen-year-old delinquent beautifully, with some Mama Cass belters serenaded wonderfully. Leah’s progression is the real understated jewel of this production, with Chowdhury wrestling with the struggle of playing a younger character energetically whilst trying to refrain from overacting – by the end of the play, this is managed. It is for this that the play succeeds; each character is shown to have a clear background, with their own intimate flaws and struggles, showing they do not exist merely as 2D embellishments to the main plot. Instead, we see actual human messiness.

Another exciting, although technically minor, character is Tony, played by Richard Penney, who carries the lofty try-hard awkwardly trying to slot into a complex community with some lovely comic timing. Penney’s embarrassment introduces a lighter tone, and his frequent flashes of puzzlement offer some relief to this otherwise sombre piece. Occasional lines seemed to hang with too much uncertainty to be intentional, but this seemed a general niggle across the play. Some lines given to Leah and the mother Sandra, played by Molly Goetzee, seemed just too long for their characters. It is tempting to wish the writer had allowed her actors more freedom to tell their story without direct vocalisation throughout. But in taking on such a play, it would have been better if the cast had been allowed more time to take control of their own lines, in order to naturalise them and prevent stumbles. Goetzee’s frustration as a young barmaid single mother sometimes seemed hollow, but in the intimate moments she excelled in her chemistry with other actors, especially Penney. The multidimensional natures of all characters in this piece were sometimes difficult to reconcile.

A real star in this show was Adam Evans, who mastered his character of Ste wonderfully, and demonstrated the blustering, awkward macho modesty of his character, defying the caricatures one might expect. Alex Marshall plays the leading role Jamie with tact and appropriate youthfulness and succeeds in establishing rapport with each of his interactions. Clearly this production deserves a larger audience, which would always be the challenge of performing at a quiet time of year. Overall, this is a piece with some strong merits, moments of truth and has made a welcome contribution to making DST more diverse.

Beautiful Thing will be playing in Caedmon Hall at 7:30pm on the 22nd June.