As I return home I am left dumfounded, staring at a blank screen still processing the hour that’s just passed. There’s a ringing in my ears, the faintest of headaches and the echoing of my thoughts and reactions as I attempt to digest Fourth Wall Theatre’s production of Beats by Kieran Hurley. The year is 1994 in a small town in the middle of Scotland and the Criminal Justice Act has effectively outlawed raves. Beats follows 15-year-old Johnno McCreadie and the people who shape his relationship with that law.

A one-man show is a taxing and ambitious feat for any actor or company ,so I want it noted from the outset that Danny Parker is nothing short of brilliant in this role. His command over the narration and captivation of the audience is astounding – credit 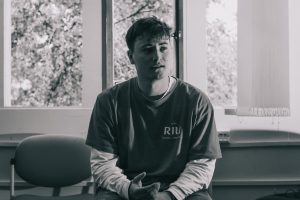 must also be given to Hetty Hodgson’s direction.

Immersive is very much the singular word to which Beats can be reduced. In Durham it’s inevitable to have to be creative with venue, and I’ll admit I was skeptical about Wiff Waff. Something feels unnatural about walking into a club in daylight: there is no hiding the sticky floor, the lingering sense of unfortunate hookups past and the instinctive urge to consume alcohol, but it only added to the overall success of the show. The music starts and the lights come on and suddenly those concerns couldn’t seem less relevant.

It’s a complete multimedia experience. Having the live DJ and visual editor brought a sense of authenticity, continuing the genuine atmosphere of the show as a whole. The video content and lighting are incredibly well designed as they very much guide the audience through the show, but the stand out part of the tech is truly the co-star Parker finds in the music. You are engulfed in a wave of bass and become hyper-aware of the volume and tempo as if you’re now connected to it. Every choice made in the production feels intentional. On the few occasions where the music stops, it’s as if your heartbeat stops with it.

As the play opens Parker’s performance does begin to seem predictable and generic, but as the narrative progresses and he seamlessly introduces each character his talent is undeniable, complete with Zelda references and an Adidas tracksuit that bring the audience a sense of nostalgia to a time the majority never knew. With an audience of no more than 30 this one-man show is intimate, personal, and authentic, with Parker furthering that sense by making direct eye contact with audience members throughout pivotal moments. His performance is hypnotic.

The strong use of tech does mean, with only one man on stage, precise dialogue is often lost, particularly in the first half of the 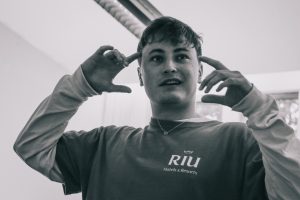 show as you find your bearings and come to grips with each character, but that seems immaterial as the overarching emotions are always clear. Soon you recognise the changing of characters without Parker needing to alter his tone or physicality because of how connected and immersed you feel.

Beyond the production elements and acting the content itself can stand alone. You’re presented with a young impressionable teen, the friends who lead him astray, a concerned mother and a haunted police officer, each of their shared humanity being brought together through one actor. At its essence, Beats is a play less about the Criminal Justice Act itself and more about the cyclical inevitability of generational divide, constantly playing with the main concept of what it means to follow orders, be they from your parents, friends, superiors or legislators.

Beats will be playing in Wiff Waff Bars at 7:30pm on Wednesday 19th and Thursday 20th June.