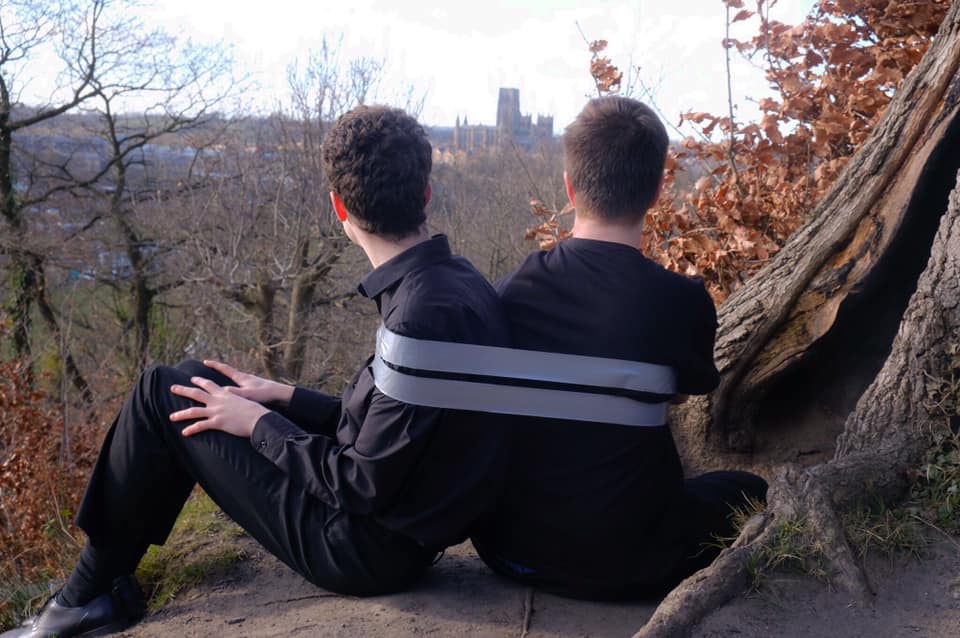 Bank explores the serious issue of the current increase in foodbanks that appears to remain unaddressed in society today. The show is set in a foodbank run by a couple and supported by two young volunteers. The constant struggle to pay rent and the pressure created by the diminishing food donations is an underlying pressure felt by all the characters from the very first scene of the show. Writer and director Tom Murray explains the reason behind the project is that foodbanks have become ‘normalised’ and ‘hidden under a culture of shame’ in his director’s note, and the show is definitely successful in highlighting this pressing issue. Throughout the play there are significant links to the historic practice of parishes providing for the poor and draws parallels to the present-day foodbank. It argues the pertinent point that both provide the bare necessities for survival but keep many trapped in the poverty cycle.

Walking into the Union Debating Chamber in Palace Green, I was immediately intrigued by the set. The thrust stage was surrounded by boxes assigned to families and individuals, cans and other ad hoc objects, establishing the room as a foodbank. The tower of boxes at the back of the stage gave a sense of disorganised chaos that cleverly foreshadowed this theme later in the play. The show’s varying pace maintained the audience’s interest, mixing moments of anger and frustration with poignant moments of calm. This was supported by the transitions between scenes that were generally slick, facilitated by the on-stage playing of an electric guitar and effective lighting. The use of an electric guitar coincided with lighting to instigate scene changes that were highly effective. The guitar highlighted the previous scene’s tone by the type of music played, successfully reinforcing the atmosphere. Murray’s decisive direction shone through with the use of space and interesting circular movement of the actors that was forced by the placement of a large box that remained centre stage throughout. This movement around the empty box of food donations symbolised the play’s focus on the lack of support or interest by society on this extremely pressing issue.

The standard of acting was impressive and each member of the cast brought a different energy to the show. Some highlights were Ben Smart’s portrayal of the lead Bart Steer, a troubled student volunteering at the foodbank. He displayed the frustration and scepticism of his character with particular conviction. The easily-angered Mark, played by Jacob Freda, was an interesting contrast to Martha Dean’s heartrending depiction of a young girl named Tim. Both presented their characters with profound attention to body language and vocal expression. Etienne Currah was another stand-out performance with his detailed portrayal of a seemingly charitable banker named Mr Norris. Whilst this was convincing his performance enhanced even further as his character’s true nature began to shine through and his nuanced expression added real depth to the character. The casts’ skill to create humorous moments in the midst of such a serious play added a lightness to the show and retained the audience’s attention well.

The only criticism of the show was the slight clumsiness regarding the props. Cans were knocked over unintentionally several times throughout the scenes and during some scene changes which disrupted the flow of the show somewhat. Nevertheless, the cans were also a successful prop when used intentionally to create a shocking clang when thrown to the floor by the actors. The set and props were used effectively overall and some care will easily remedy this slight criticism.

As a final note, this show was thoroughly enjoyable to watch. The numerous links to the historic prevalence of poverty and poor relief really emphasised the seriousness of the increasing problem of foodbanks. Moreover, all profits of the show are being donated to the Durham foodbank which highlights Murray’s dedication to this problem.

Bank will continue in the Durham Union Debating Chamber on 1st March at 2:30pm and 7:30pm.