Finlay Mead is extremely impressed by the high standard of Shakespeare performance offered by 1TC. 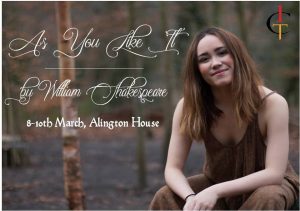 First Theatre Company’s production of William Shakespeare’s As You Like It – a comedy which follows lovers Rosalind and Orlando, forced to seek exile in the Forest of Arden, where they, as director Cameron Yule explains in his commentary, ‘become involved in an intriguing game of love, gender, and identity’ – debuted at Alington House on Thursday 8th March, and was undoubtedly a creative and technical triumph.

What initially made it abundantly clear that this production was to be a cut above many Shakespeare adaptations seen on the student circuit was the delivery of vast amounts of complex Elizabethan lines in a way that, by and large, felt utterly natural, and at no point throughout slowed the fervent momentum of this production. Every scene was compelling, and the whole production moved at a rapid and captivating pace, whilst still keeping hold of the more lingering and delicate moments that the play has to offer amongst the pervasive mischief.

This is, of course, thanks to an admirable combination of casting and acting. The whole cast gave good performances, but as with any cast this size, there were standouts. Both Rosalind – Fionna Monk – and Orlando – John Broadhead – were superb. Broadhead dominated the first half of the play, his emotional range setting up the dramatic events of the play flawlessly, whilst Monk was commanding in the second half, working tirelessly scene to scene to carry the plot to its close. However, this is not to undermine both their performances throughout the entire play, or, indeed, to overlook others; Alex Berridge-Dunn, as Touchstone, had an unrivalled grasp on the rhythms and weighting of his lines, allowing him to make them sound both natural and funny to an unparalleled degree. Aaron Rozanski, who very successfully portrayed Charles the Wrestler, Silvius, and Sir Oliver Martext, epitomised another element of this casts ability – its versatility: the production saw several examples of cross-gender acting, and nearly all of these were to the production’s great benefit.

This accomplished cast was rightly supported by more technical elements that were essential to making the production as immersive as it certainly was. Performed in the round – a choice in of itself that allowed for a more complex use of the space at Alington – the staging was minimal, relying only on a few black boxes and some vines strung across the ceiling of the space. Both were used shrewdly, and proved plenty to transform Alington into an enchanting and diverse Arden. Lighting played a similarly important part. Though simple, it was deployed deftly and consistently throughout, which helped to add a feel of professionalism to the entire production that is so rare in student theatre. Costumes, too, though simple, in their earthy colour palettes of browns, whites, and flecks of greens and reds, found harmony with the woodland setting, and did yet more to bring the Arden to life.

The standout element of the technical side of this production, however, was the live music ensemble. Their welcome melodies between scenes maintained the plays hard-earned atmosphere whilst the stage was clear and supplemented the professional of the production. However, it was when they struck up alongside a full stage that the ensemble really came into its own, the early wrestling match between Charles and Orlando – already choreographed to perfection – especially benefited from the sudden striking up of the musicians, and they did well to take the production’s few songs to another level of sensation. I applaud producer Hannah Roe, tech director Josh Gordon, stage manager Polly Lindsay, and musical director Emily Winters, who were all absolutely essential in making this production what it was, squeezing an entire pastoral landscape into Alington House’s back room.

Though faults were few and far between in this production, there were small elements that could, perhaps, be improved. Sophie Cullis’ Celia clung a little close and slightly too meekly to the authoritative Rosalind, had she made better use of her space and her voice the two may have felt a little more balanced, and Aliya Gilmore’s Duke Frederick felt a little more stroppy-teen than deep-seated-familial-resentment at times. Moreover, hilarious as Ben Clark’s Audrey was, the joke revealed itself to be a little flat as the play went on. In this day and age, a typically-masculine-man clothed as a typically-feminine-woman is no longer a joke in itself – something more should have been done with it.

However, the main thing I would have seen altered is not necessarily a negative comment at all; I simply wish that the cast had had the confidence to play some of the funnier poetry in the play for the laughs. The should have held the punchlines and the puns, making the audience appreciate the play’s complexity and wit. Some jokes were skirted around or given no time to air, and though I understand that breaking their momentum to gamble on a laugh is a risk, I think it certainly could have paid off, given the otherwise very high standard of this production.

Overall though, this was a hugely impressive performance. Taking on any Shakespeare is a bold choice for director, cast, and crew alike, but Yule and his team pulled it off with flair. An incredibly strong cast, who not only knew but understood the intricacies of their lines so well, when coupled with an evidently committed and skilled production and technical team, had all the potential to be a great success, and it certainly was. In my mind, Arden is welcome back to Alington any time at all.

As You Like It will be playing at Alington House on the 9th and 10th March at 7:30pm.