Grace English is transported to the Forest of Arden by Bailey Theatre Company’s ‘As You Like It’.

As You Like It is a classic Shakespearean comedy, featuring romance, cross-dressing, pastoral aesthetics, and comic relief. Bailey Theatre Company’s production brings all of this to life, in a performance that was truly magical from beginning to end.

The production immerses you in its world before it has even begun, with artificial flowers and fairy lights transforming the set into the Forest of Arden, using a stylised aesthetic that avoids looking cheap or artificial. Furthermore, the choice to have the seating be in the round, whilst making use of the whole hall space, served to create a sense of immersion and intimacy 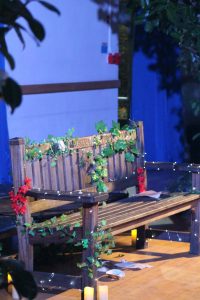 between the characters and the audience. The use of lighting was consistently impressive throughout, managing to capture the audience’s attention and add to the ambience of a particular scene without becoming a distraction. Similarly, the production made good use of music; the small detail of having the background noise of birds tweeting during forest scenes was just one of many ways in which the spectacular attention to detail manifested itself. Overall, the technical aspects of this production were highly impressive.

Molly Byford’s masterful direction was what made the play as engaging and enchanting as it was. It was clear that extensive thought had gone into every scene, and her hard work more than paid off; the actors made full use of every part of the stage, and were able to draw attention to themselves in key moments – such as the infamous ‘All the world’s a stage’ soliloquy – without it appearing contrived or unnatural. Difficulties such as the transition between scenes with Duke Senior and Duke Frederick, when both were played by Alice Butler, were handled smoothly and cleverly, appearing natural and causing no disruption. Yet the true strength of Molly’s direction came in the attention to small details that made the play special. Comedic moments such as Touchstone’s proposal to Audrey or his rebuttal of William were rendered memorable by Richard Dyer’s having to scoot whilst on one knee, or Dan Carr’s covering his head with his bouquet of flowers; such small additions served to engage the audience and amplify the tone of the scene.

The comedic elements of As You Like It are crucial to a successful performance of the play, and Bailey Theatre Company was 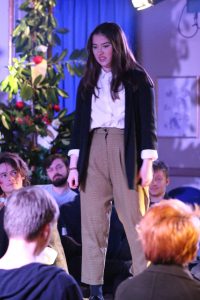 able to bring the comedy to life in a dynamic and powerful way. The cast made use of the window behind the stage as best they could, frequently having characters follow or chase one another in scene transitions, to a hilarious effect. Richard Dyer’s performance of Touchstone milked the character’s comedy for all it was worth, and without fail, stole the scene without fail every time; particularly memorable was his character’s efforts to carry five suitcases by himself, a sequence in a scene transition that had the audience in fits of laughter.

As important as comedy is to the play, equally important is striking the balance between it and moments of pathos, and the cast did a wonderful job of doing just that. Sam Richards gave a brilliant performance as Jaques, ranging from witty and acidic in his interactions with Orlando to endearingly melancholic during his infamous soliloquy, holding the audience’s attention throughout. Similarly, Alice Butler did an impressive job playing both Duke Frederick and Duke Senior, transitioning smoothly between the characters and giving a convincing portrayal of both. Ruth Louis’ Rosalind and Rory Gee’s Orlando were each highly engaging, giving genuinely moving performances that showed a real understanding of the depth of their respective roles. It was clear throughout that every member of the cast was committed and passionate, and this passion was shared with the audience in such a way that the play felt convincing from start to finish.

The only flaw that could be found with this show is that it could have been more evenly paced – the second act, in particular, felt far too short. The wedding scene could have been drawn out for longer, or else made more engaging; it felt as though it was over before it had even begun. Besides this, however, the production is seamless.

Overall, Bailey Theatre Company did a highly impressive job with their production of As You Like It, with obvious attention having been paid to the direction, set, and characterisation serving to make the play special.

As You Like It will be playing in Leech Hall at 7:30pm on Sunday 17th February.