I find it is a mark of either great esteem or great condemnation when a reviewer leaves a performance with very few notes. Sightline Productions performance of Henry Naylor’s Angel is, triumphantly, the former, and with good reason. Director Hiba Benhamed’s praiseworthy choice of play, while admittedly not one I had heard of before, proved to be emotional and evocative, with Gayaneh Vlieghe as the eponymous Rehana bringing the lyrical words to life in a truly masterful manner.

Naylor’s play tells of the life of the Rehana, the Angel of Kobane, a young Kurdish woman who is forced to give up her passion for law in order to fight those who would oppress her gender and family, after her home is attacked. This is expressed through 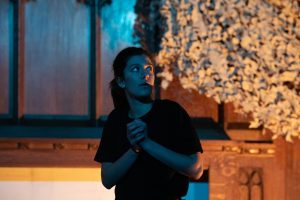 the performance of an extended monologue charting Rehana’s life.

In student theatre, the prospect of a one-person show can be as daunting for the audience as it is for the actor, but Vlieghe’s nuanced performance immediately assuages all doubts of this. In a word, she is mesmerising: demonstrating expert control of voice and gesture, with her entire persona seeming to shift as she transforms from young girl to soldier, and to all the supporting roles which accompany her on her journey. I find her performance of Rehana’s father to be particularly impressive, with the deep voice and masculine mannerisms initially presented as threatening, but steadily morphing into a more nuanced, heart-warming, and at-times painful depiction.

More compellingly, though, is that under Benhamed’s capable direction, Rehana is not only a character the audience can sympathise with, but root for, resulting in a short and tightly-focused production that was full of tension. Nevertheless, I am also pleasantly surprised by the dry humour in the production, usually expressed in cynical asides or a perfectly-timed eyeroll. This helps to break up the aforementioned suspense with little pieces of much-needed comedic relief.

For the most part, the production was minimalist, with limited set pieces and simple costume, which allows the audience to be transported without the need for props. The tech further aided this, with fluid transitions and lighting colours which 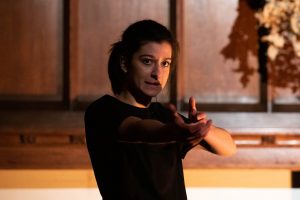 seamlessly integrated alongside the monologue: all this allowed Naylor’s dialogue to take centre-stage.

As an intimate venue, Hatfield Chapel is perfect, and its acoustics are well-suited to solo performances such as this. However, it must be noted that its visibility leaves much to be desired, as I often find myself straining past the heads of other audience members to get a better look at the stage. Moreover, this is exacerbated by some of the movements, which have Vlieghe sitting or kneeling on the ground, thus rendering the entire action, and in particular changes in facial expression, completely obscured to the majority of the audience. Smaller locations always run this risk, but I would have appreciated it if the blocking had taken greater account of this. Nonetheless it is the only qualm I have with the production.

The combination of Benhamed’s skilful direction and Vlieghe’s top-notch acting makes this play the most moving I have seen so far in Durham. While the current weather may not readily lend itself to a trek up the Bailey, I really hope Sightline Productions’ Angel gets the audience it deserves.

Angel will be playing in Hatfield Chapel on Saturday 2nd and Sunday 3rd February at 8:00pm.