Review: And Then There Were None 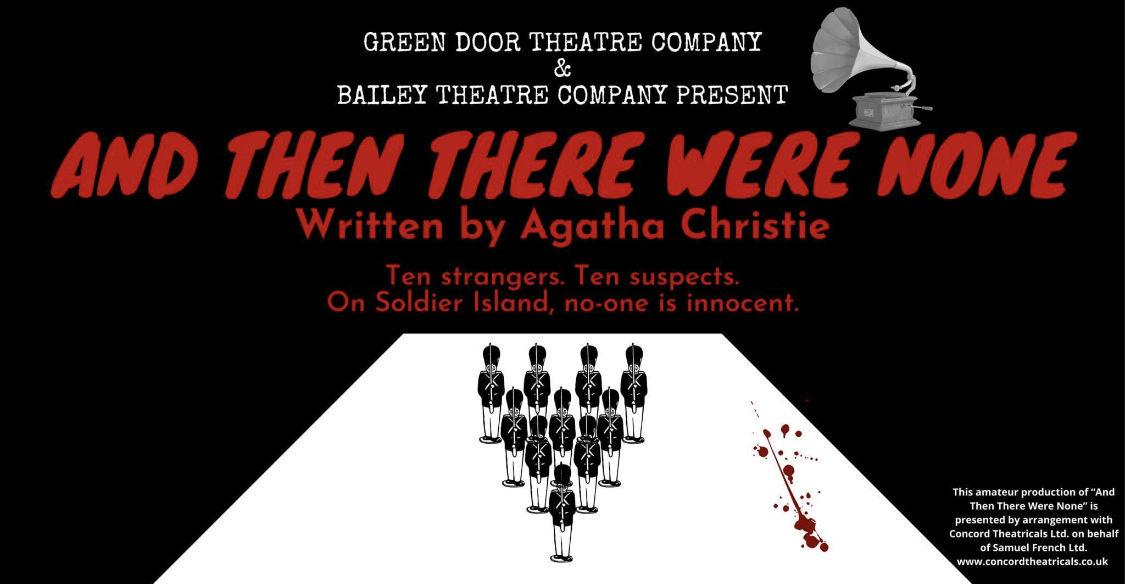 Commonly referred to as ‘The Queen of Crime’, Agatha Christie’s And Then There Were None is an undoubtable landmark of literature; with over 100 million copies sold worldwide – outsold by only Shakespeare and The Bible.

Having previously read Christie’s iconic ‘whodunnit’, I was admittedly slightly sceptical about how any stage performance could possibly live up to the author’s formidable notoriety. Fortunately, the combined efforts of the Green Door Theatre Company and Bailey Theatre Company completely shattered such reservations with a gut-wrenchingly impactful performance. To say I was pleasantly surprised would be a paltry injustice to the play’s monumental triumph. The attention to detail and stagecraft goes above and beyond to illuminate Christie’s most iconic work. With a gripping combination of zany dark comedy, an outrageously talented cast and an impeding sense of destruction – And Then There Were None provides a bewitching return on a beloved classic.

With ten protagonists and a wealth of acting talent – directors Maria Galimberti and Matthew Bourne rise to the challenge by adopting Christie’s flair for intricate characterisation and plot detail. There is not one weak link amongst the extraordinary young thespians, with every character oozing an individual perplexing magic – having seemingly stepped straight from the novel and onto the stage. Intentionally neutral costume design keeps the suspects on equal footing, with no obvious clues as to the villain’s identity. The subtle gesticulation embodied a real-life game of Cluedo, propelling the audience into a cat-and-mouse investigative pursuit of the guilty party. Throughout the performance, I was captivated by the claustrophobic, nightmarish atmosphere that plagued the set, exemplified by the immersive construction of the mise-en-scene.

It was the didactic on-stage relationship between the characters that undoubtedly strengthened the production, setting it apart from its predecessors. The cast’s poignant portrayal of each individual character cannot be commended enough. Notably, the sporadic, explosive enragement between James Roberts as Phillip Lombard and Archie Nolan’s police officer, William Blore, cultivated a piercing apprehension within the audience – I consistently found myself gripping my seat, encapsulated by their fiery feuds.

I also have to underline Alessia Laird as the impervious, stone-faced religious fanatic, Emily Brent. To flourish in such a reprehensible character is a formidable task, yet Laird pulls this off with ease. Contrastingly, I couldn’t help but giggle at Matthew Cook’s light-hearted and uplifting portrayal of the smarmy socialite, Anthony Marston – which rewarded the audience with a warranted flash of comedic relief. Isabelle Lepore makes light work of the demented General Mackenzie, with a haunting forewarning of the group ‘not making it from the island alive’ that left me dithering. Ben Rook and Emma Shackleton made a wonderfully charming dynamic, with a streamlined dialogue that flowed beautifully between them. Finally, (but certainly not least!) Will Russel presented a fleeting yet hilariously memorable portrayal of boat-hand, Fred Narracott – with an astoundingly convincing Yorkshire accent.

From a technical perspective, the performance is ingenious and exudes professionalism. Nathan Jarvis excels at creating an evocative, candle-lit glow that channels Christie’s knack for using setting to propel a storyline. The technicality of the production felt so attentive and personal – I could really appreciate the thought processes behind even the most subtle changes to the mise-en-scene. As both an audience member and critic, I loved how the lighting morphed from a comforting solace towards an ominous veil of shadow – twisting the audience’s perception of the characters from mere victims to potential ruthless killers.

Bringing a fresh perspective to a classic tale, the audience was kept in a fast paced and ever-changing guessing game right up until the play’s gruesome conclusion. With a beautifully unsettling climax, I must note the audible gasps that permeated the spectatorship in a painstakingly macabre ending. The engaging and thought-provoking drama left me fully immersed in the story-line, yearning for an encore once the play reached conclusion. My own feelings were enthusiastically echoed, as one audience member jovially remarked – ‘I’ve not read any Christie, but I will start now!’.

I can assure Christie enthusiasts that they would not be disappointed by this authentic stage production – dripping with raw mastery, emotion and integrity.