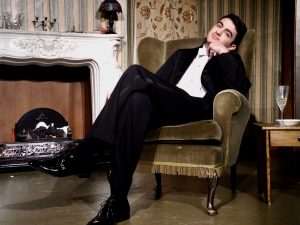 I am, I confess, perhaps a biased reviewer when it comes to DUCT’s An Ideal Husband. Not only was I slightly under the weather (as everyone else is, it seems), but I absolutely adore Oscar Wilde’s plays. I love the drama, the comedy, and the timeless critiques of everything from dating to politics. I was coming to the piece with high expectations, and DUCT delivered. DUCT’s rendition of Wilde’s classic text seamlessly blends the lighthearted comedy with the more serious drama, and brings the story to the stage with energy and impish delight.

Director George Ellis has obviously put a lot of thought and energy into the atmosphere he wanted to project. The performance of the play was very old school. The theatre smelled comfortingly musty, there was the traditional curtain drawn across the stage, and the set was very realistic and detailed. This was not a postmodern, stripped down theatrical performance; it was good old-fashioned performative entertainment. Though occasionally somewhat stiff and limiting, the staging was largely effective, drawing attention to a comedic moment or highlighting the dissonance between characters. Of course, comedy is very important to a Wilde play, and comic timing is something that can be very hard to master. Actors and directors either have an innate sense of comedic timing, or they do not. Overall, the comedic timing and pacing was very good. The punchlines that Wilde is so famous for were delivered elegantly and effectively, and it was clear that the director and cast had worked on this aspect specifically during rehearsals. Occasionally, the pacing was too fast, and moments that should be left to linger were cut tragically short, but was usually appropriate and never dragged its feet. 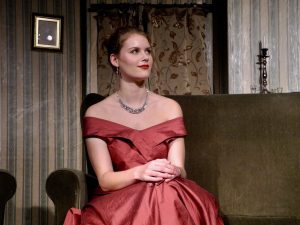 Generally, the acting was very good and should be praised, not only for the high quality, but for making the dialogue in the text sound natural, when sometimes performances of Wilde’s work can feel somewhat dated. Harry Scholes and Ioannis Karellis play Sir Robert Chiltern and Lord Goring respectively, the main characters of the play. Scholes and Karellis find a perfect middle ground between the absurdity and sympathetic nature of their characters, neither sacrificing drama nor comedy. Their comedic timing is excellent, and though physical comedy is rarely used, it is used effectively. Lady Chiltern, played by Lily Kattenhorn-Black, is a refreshing counterpoint to these two characters, and she also expertly finds the balance between a sympathetic, realistic character, and being comically cold and stern. Yasmin Rufo, who plays the frivolous Mable Chiltern, took a while to find her stride and energy, but was really wonderful once she found it. Ryan Yao-Smith and Katie Sterland play their completely ridiculous, foolish, old, meddling characters with incredible, heightened comedy and are always a joy to watch on stage. The supporting cast, too numerous to list here in full, had somewhat low energy initially, but once they found their pace, they did an excellent job. Nina Stevens plays the role of Mrs Cheveley, the antagonist, with great enjoyment and revelry in her own evil nature. She is, however, somewhat on one note, with only one expression and tone of voice. It would be great to see more versatility from Stevens, and to see her fully embrace the elements of the ridiculous in her character and break free of the smug, sultry mould.

Technically, the play is quite sparse, using minimal, naturalistic lighting and sound effects. This is actually very effective, as Ellis clearly had a vision for a very traditional staging of the play. Some subtle sound cues, such as music underscoring the first act, could have made the piece feel more immersive, though it would have been slightly incongruous. The props were generally used very well, though on occasion they felt extraneous. I found myself admiring the backstage crew, but asking whether the stage cigarettes, brandy, writing desk and so forth were entirely necessary to the telling of the story.

Overall, An Ideal Husband was a thoroughly enjoyable night, filled with laughter and engaging storytelling. It is not poignant, or self-consciously political, or emotionally touching. It is not a difficult play, not one that you must mull over and think about deeply. It is simply a fantastic story, brought to life by a hardworking, immensely talented team.

An Ideal Husband will be playing at the City Theatre on the 8th and 9th December at 7:30pm.