Review: All Shook Up

Ellie Farrell has fun at the Woodplayers’ take on the Elvis Presley musical. 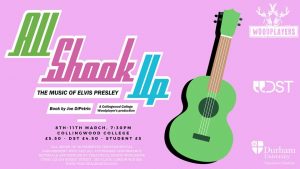 As a fan of Elvis Presley’s musical roster, I was predictably excited to be taken on a tour of his work through the medium of a musical. Based on Joe DiPetrio’s original book, and adapted for the stage by Collingwood College’s Woodplayers, All Shook Up is a fun, energetic romp which takes you on a spirited and nostalgic cruise through The King’s music history.

With some inspiration drawn from Shakespeare’s ‘Twelfth Night’, ‘All Shook Up’s’ story begins in Eisenhower America and with a dreary little town, in the American Midwest, that has had all of the life drained from it. The town’s mayor (Catrina Gilmour) has imposed a ‘decency proclamation’ on the townsfolk, thus preventing any pelvic thrusting of any kind. Out-of-towner, leather-clad Chad motorcyclist (Josh Russell) takes it upon himself to liberate the people through the power of song and dance, utterly enamouring local mechanic and ‘grease-money’ Natalie (Isla Brendon) in the process. What follows is two hours of energetic madness, with enough love triangles to outdo even the Bard.

Call it the ‘Mamma Mia syndrome’, but there appears to be a fairly recent fad of creating musicals from pop songs, which has been met with mixed reviews. ABBA’s musical was met with much acclaim, but little is really known about All Shook Up. This, by no means, implies that the show is forgettable, it just simply isn’t as memorable as you would like it to be. All of the characters are exaggerated stereotypes who act without an ounce of sense, thus making them particularly difficult to relate to and root for, especially when the male lead is a hot-headed, ditzy narcissist. However, the Woodplayers should not be held entirely accountable for this; this criticism is fundamentally directed towards the original work and story which seem to serve as the root of this problem.

What the Woodplayers conveyed successfully was the sense of fun this play is intended to generate; they possessed good energy, both physically and vocally, and everyone onstage seemed to be having the time of their lives. Such energy is infectious, and no doubt the audience enjoyed themselves too. Owing to the large stage (situated in Collingwood’s dining room), a large ensemble cast was needed to fill the stage and the space was utilised well, never feeling particularly empty. Commendation should be given to Alice Aucott for choreographing fun, co-ordinated and energetic dance routines for both the principal and ensemble cast.

Tackling Elvis songs is a large task, and, in spite of this, the vocal performances were incredibly good. Despite first night nerves, most of the songs were delivered extremely skilfully. Standout vocal performances included Tamsin Kerslake as Sylvia, the robust front-runner of the town’s ‘honky tonk’, and Isla Brendon as Natalie. Both had good projection and enunciation; they commanded the stage effortlessly. Josh Russell embodied the liveliness of the play with strong vocals, and dance-moves akin to Presley, solidifying himself as the ‘King of the Open Road’. Only the classic ‘Devil In Disguise’ was delivered in a way which was seemingly lacklustre, lacking the dynamic energy of the other numbers; a particular disappointment as the song is a favourite of mine. Another minor issue was that due to the wonderfully bombastic live orchestra, the vocals could sometimes get lost, and were drowned out, by the music.

The set itself was simplistic; no doubt owing to the space required by such a large cast, and to prevent overcrowding and collisions. However, a little more embellishment and colour would have served well to highlight the fun tone of the play. The lighting functioned efficiently through the use of spotlighting, particularly. As with any play in its first night, a few minor technical problems with the props and set were notable, but these were dealt with professionally by both the actors onstage and the tech and backstage crews. Despite this, the set transitions remained mostly clean and swift and served as no particular distraction, or irritation, to the audience.

Act One of the performance is particularly enjoyable, with the play’s strengths really shining here; the majority of well-known songs are littered throughout this half, and the story is engaging and humorous, attributed to a plethora of Elvis related puns sprinkled throughout the dialogue. Arguably, the play stumbles a little in its second half, meandering through the conclusion to the story which could have been told, with just as much effectiveness, in under half the time. For me, the ending was a little unfulfilling, but a powerfully lively rendition of ‘Burning Love’ had me leaving with a smile on my face.

All Shook Up is a deliriously unrealistic portrayal of love. Filled with moxie and vitality, it is incredibly entertaining even if it is not the perfect play. Not requiring too much thought or concentration, it serves as good removal from the real world in spite of some shortcomings. It is escapism, pure and simple, and while it might not be quite Graceland, it doesn’t belong in the Jailhouse, either.