REVIEW: All Over Lovely

Alexander Cohen dives into Letterbox Productions’s performance of ‘All Over Lovely’.

Clarie Dowie’s 1997 play is complex. On the one hand, a touching tale of a once forbidden now failed relationship, and on the other a meditation on life in the aftermath of second wave feminism. Director Isobel Jacob has not shied away from addressing these themes. Her production is a worthy attempt at staging this challenging play that deserves Durham’s attention.

Gabriella Sills and Ruth Louis are confident in their ability to carry the hour long two-person show on their shoulders. Both 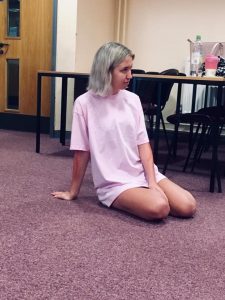 performances are multi-layered and nuanced, never straying into being overly dramatic or not serious enough. Louis portrays her character’s deep anger with the world around her with ease: as a lesbian woman who describes herself as an “anarchist,” she still feels herself a victim of the capitalist patriarchal power structures she strives to break free of. This stands in stark contrast to Sills’ character, an accomplished businesswoman who is more comfortable conforming to a materialist life. Sills smugly smiles at the mention of her Porsche whilst nonchalantly applying lipstick, she is vindictive but endearing nonetheless. Here lies the true heart of the play: the battle between forging a woman’s own identity and accepting the one provided for them by society. Lesbianism was once a radical act of political rebellion, a rejection of societal values. Now it has been engulfed and digested by capitalist ideology. Despite being over twenty years old, this theme seems incredibly relevant today given outrage concerning the corporate commodification of LGBT culture (LGBT sandwich from M&S anyone?).

This theme is further explored through simple yet effective staging. The stage is empty apart from two suitcases on either side of the room. Jacob’s creatively must be applauded; the symbolism of clothes adds an important layer to the play in terms of the exploration of external identity: Sill’s black dress as a reminder of the corporate world, Louis’s “brown boots” as a return to rural life; all are seamlessly intertwined into the production giving it further reality

The retrospective nature of the narrative allows the women to balance this perhaps unanswerable question with mediations on love and relationships. Jumping in time from childhood to present day, allows for moments of varying physicality: shifting from life weary adults to excitable children was needed to break up extended and potentially static monologues. Jacobs has a sharp awareness of the audience; monologues are never overly long and dialogues are varied and consequently always interesting. The choice of John’s Bar as a venue is interesting; whilst is not designed to host plays, it ultimately suffices in its purpose of providing intimacy for both the actors and the audience.

All Over Lovely is ambitious for trying to tackle such themes in fifty-five minutes. Whilst it doesn’t answer all the questions it raises it explores the topics with the respect they deserve. The audience will be left intrigued by the ideas it presents as well as the haunting atmosphere of lost love that Sills and Louis successfully foster throughout.

All Over Lovely will be playing in John’s Bar at 7pm on Sunday 23rd and Monday 24th June.