REVIEW: All My Sons

Green Door Theatre Company’s production of All My Sons by Arthur Miller is staged in the Cassidy Quad of St. Chad’s College. Illuminated by chandeliers and spotlights, this has been the most brightly lit production I have seen of late. The set design is simultaneously minimalistic and effective: consisting of two armchairs and a table and surrounded by plants, successfully evoking a domestic setting and the outside garden. I was impressed by the excellent use of performance space, particularly the creative entrances and exits from the various doors around the room and having characters speak through the window.

Set in post-World War Two America in 1947, All My Sons is a scathing indictment of the American Dream, and a compelling exploration of its impact on family relationships. However, immediately after the play begins, we are aware that it is a British adaptation: the actors speak in British accents instead of adopting American ones, and the cities mentioned in 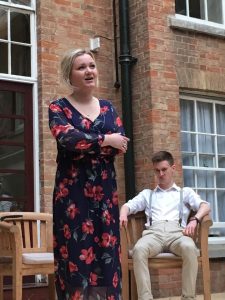 Miller’s play are replaced by London and Manchester. This decision, like the rest of the play, was refreshing and authentic, successfully allowing the actors’ natural, unforced emotions to come to the fore. One of the standout performances was from Cameron Ashplant as Joe Keller: his deep, sonorous voice and the visible shadow on his face vividly expressed his character’s complex emotional anguish Equally commendable was the indefatigable energy exuded by Oscar Duffy as Frank Lubey onstage, providing comic relief to the play’s more serious undertones. Similarly, Amy Porter’s performance of Kate Keller’s soliloquy was powerful, moving, and fearfully intense, to the extent that Larry’s presence was palpable onstage despite his absence from the entirety of the play.

While the play is largely punctuated by serious, visceral confrontations between characters, the moments of comic relief are interspersed smoothly and effectively. The audience laughed especially loudly when Annie and Chris were kissing and interrupted by Joe – one of the rare instances of domestic bliss situated in between the collapse of a family’s relationship. I could not help laughing at Amy Porter’s deadpan delivery of the line ‘While you were getting mad about fascism, Frank got into her bed.’ Moreover, I found Sue’s catty confrontation of Annie particularly humorous: particularly with the wordplay of ‘virgin’ and ‘version’, she convincingly portrayed the archetypical overbearing neighbour.

Throughout the play, the use of sound is generally effective, but can sometimes be superfluous. For instance, the car engine was jarring and marred the emotional tension of the closing scene of Act I,  and music was abruptly cut short in the final scene after the suicide of Joe Keller. However, the use of sinister, discordant music, coupled with the subtle yet masterful use of colour in costume design successfully created an emotionally haunting atmosphere: when Kate is shown sleepwalking on stage 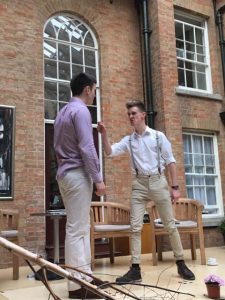 and is about to confront Annie, the music plays as she walks in a ghostly white bathrobe.

The compression of the play’s second and third acts helped accelerate the pace of the dramatic action, rapidly building up to a poignant, stirring ending: George’s presence was malicious and acrimonious: Griffin Shelton must be commended for his excellent delivery and movement: at one point, he hit the table so loudly that there were visible tremors in the audience. Likewise, Chris throwing Joe on stage face first to the point where he nearly collides with the flowerpot, and Kate slapping Annie on the face, evoked a similar reaction. The emotive, powerful delivery of Chris and Kate during the play’s ending brought several audience members to tears.

Decades after the original historical context of All My Sons, Green Door Theatre Company’s production manages to adapt the play with nuance and gravitas, bringing a modern audience to both tears and laughter.

All My Sons will be playing in the Cassidy Quad in St. Chad’s College at 7:30pm on Sunday 17th March.