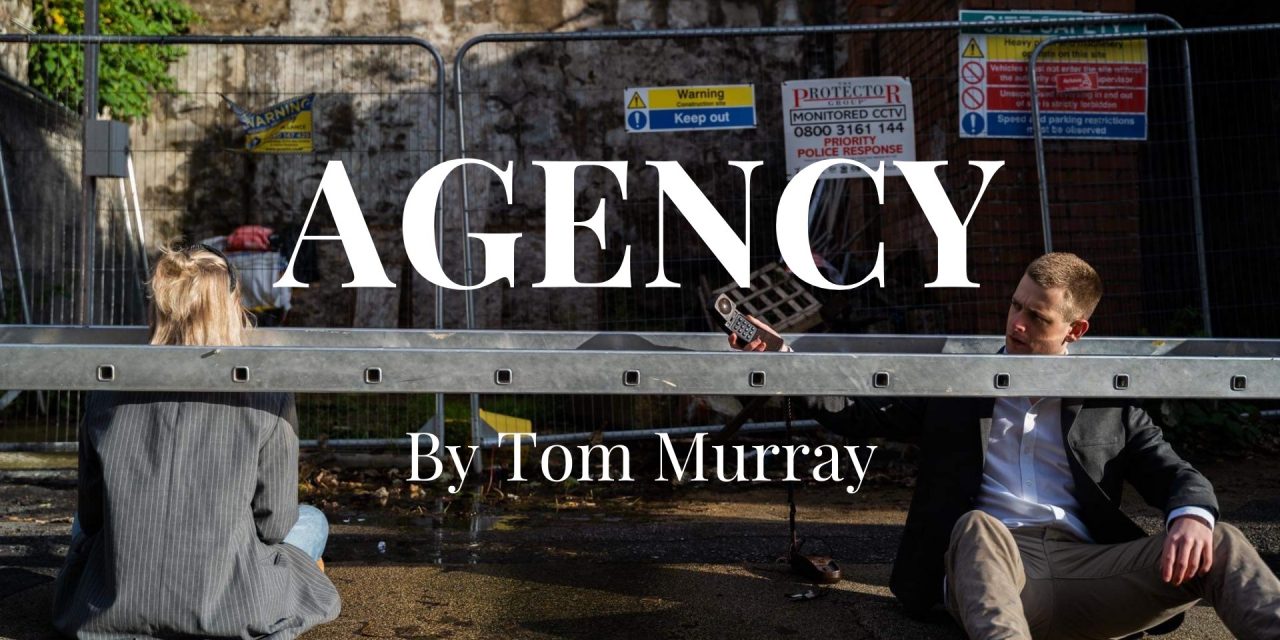 Molly Kavanagh is drawn into the absurd but woefully accurate world of Suffragette Theatre Company’s Agency, a timely story of the exploitative nature of real estate and disaster capitalism.

An absurdly strange, political comedy about the exploitative nature of modern real estate and the victims of capitalism, ‘Agency’ is a fantastically surreal yet regrettably accurate piece of writing from Tom Murray.

Indeed, the star of this show is the script. Murray’s work is sharp and witty; intellectual, without leaving the audience trying to decipher the meaning of every line. His writing is incredibly sophisticated and never feels like it is trying too hard to get a laugh; everything really was ‘to my satisfaction’. The word-plays are clever and so many that you could not possibly hear every quip; instead, you are left surprised as the wit of the previous line lands as you’re still listening to its reply. The overall style of the piece works well with the underlying political commentary on our flawed, exploitative systems of wealth and property.

The production value, at times, left something to be desired. The space on stage felt cluttered with unnecessary, bulky pieces of set which brought little to the piece, especially when the actors on stage gave such ‘big’ performances. Conversely, the farce with the telephones worked perfectly and was impeccably timed by the tech team, creating an incredibly funny scene. Similarly, the toilet roll sequence was creatively hilarious and left you in awe of the innovative use of such simple props. The music did, unfortunately, drown out the voices on stage several times, and with such quality writing, this was very disappointing.

Isabella Thompson as Gestas Jones makes big choices and commits to them. Her confidence as a performer was evident from the offset, with a consistently high level of energetic physicality throughout, matching the farcical tone of the show. This was all the more highlighted by the ingenious use of shadows by Murray.

However, Thompson’s delivery was often too fast to hear exactly what she was saying, and her entrances tended to be very quick after her fellow actors had spoken, meaning some of the funnier lines did not get a chance to land, and there were many missed opportunities for comedy. I also felt that at times she tried too hard for the laughs, rather than letting the writing speak for itself.

Thompson’s quieter moments, on the other hand, were wonderful. She has the ability to truly captivate the audience with what she is saying, drawing the viewer in particularly during her longer monologues, such as the description of the houses she was letting. She understood perfectly the underlying themes of casual deceit in the delivery of these lines, leading to an intense watchability.

Ben Cartwright’s Dismas Smith was effortlessly funny. Cartwright was so at ease on the stage that you couldn’t help but watch him. He created comedy from the smallest glances, helping extract the humour from the action around him, as well as his own lines. His choices were smaller than his co-star but struck a more comfortable balance between naturalistic and surreal. Most crucially, he had masterful timing, allowing his jokes to settle, building up to punch lines and never trying too hard to be purposefully funny. He delivered every line honestly, in a near-perfect comedic performance.

In the supporting cast, Eliana Franks had a beautiful, naturalistic style, which created a stark yet effective contrast with Cartwright’s more obvious performance. Similarly, Etienne Currah’s landlord did very well to portray the enigma at the top of the capitalist food chain with his cold yet animated tone; this became increasingly frustrating with every new entrance, building comedy.

Being back in a theatre for the first time in seven months was truly indescribable. This genre of play relies on an audience creating the correct atmosphere to be effective. The staggering applause at the curtain-call was an extraordinary moment to share with a cast and crew who have clearly worked tirelessly to put on the first in-person show of the year. ‘Agency’ is definitely an acquired taste in terms of style, but nonetheless, an incredibly successful piece of politically-fuelled art that reminds us of the value of live theatre.

Agency continues at the Assembly Rooms Theatre on 30th and 31st October.