Review: A Taste of Honey 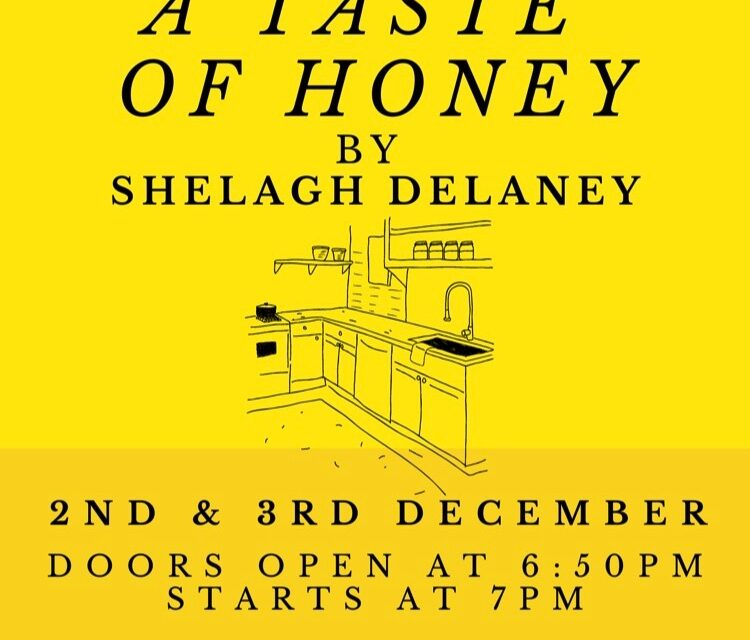 “the characterisation of the entire cast is exceptional”

A Taste of Honey was written in 1959 when the playwright, Shelagh Delaney, was 19, a flex even some DDF writers can’t boast. Sixty odd years later, its rejection of the upper middle class monopoly on theatre still makes the revolutionary kitchen-sink drama as surprising and enthralling as it ever was.

Presented intimately in Chad’s Chapel, Director Elena Reuther’s interpretation is immediate: a naturalistic, gritty presentation of tragic tales in ordinary life. The backdrop of theological beauty which scores the scene, whether intentional or force majeure, creates a highly effective dichotomy for the audience – surrounded by gold, art and artefacts, we are forced to intimately reckon with the suffering of individuals below the poverty line. Individuals who differ vastly in their sympathy to an audience who walks in hoping to like them, and finds it, in one case, increasingly hard to do so.

Said case is Helen, played with brutal realism and unrelenting energy by Lottie Heslop, a character who appears at first to be a charismatic and troubled but nonetheless compassionate mother trying to be positive about a tough situation. Such a veneer fades as the play progresses however, until we meet the true Helen; callous, selfish, entitled and hateful; more than willing to abandon her daughter for a chance with the hilariously scummy Peter (Lex Irish), a younger, richer man with equally destructive drinking habits, strutting around the house with nothing good to say about anything like a pirate Gordon Ramsey. Nonetheless, there is a vulnerability and love somewhere with Helen which Heslop captures; a tragic compassion for her daughter that finds Helen unable to let her be exactly when she needs to. This compassion is more often defeated by her selfish vices, however, which in turn make her neglect her daughter in the moments she’s most needed. This, when added to her racist attitudes, homophobia and causal abuse, renders a figure so unlikable that any redeeming qualities get lost in the ocean of cruelty.

However, the central narrative does not revolve around her, but rather Jo (Cora Frith-Fletcher), the tragic protagonist unable to escape her mother in more ways than one. Frith-Fletcher is believable as a 17 year old trying to find their way in a complex reality, but more than that, she creates a raw desperation of a person so eager to avoid the mistakes and vices of their mother and yet so inevitably condemned to repeat them. Perfectly capturing her headstrong sense of self in tandem with that underlying weakness that allows her to sink into the arms of friendly faces and forceful figures alike, Frith-Fletcher is terrific as the protagonist, never failing to hold the stage.

Nonetheless, whilst individual performances excelled, the dynamics between characters fell flat at times. The motherly dynamic between the two is superb in Act 2 but took a while to get going. The ending of both halves was abrupt and felt a little rushed, which is perhaps illustrative of one of the play’s more significant problems: pacing. Whether to keep up the energy, or keep down the run time, the dialogue at some points was unnaturally fast and snappy, leading to a lack of pacing diversity that became overwhelming at times. Lines about feeling exhausted lost weight when spoken with punchy cadence, causing the naturalism to fade, with the play sometimes feeling too much like a play.

Nonetheless, the characterisation of the entire cast is exceptional. Lex Irish oozes sleazy charisma as the aforementioned Peter, perfectly embodying the 50s misogynist caricature with the chain smoking, tongue flicks and spitting on the ground to the point where he can’t help but overstay his welcome. Certain lines – “give your nose a good blow, woman!” – are, despite themselves, laugh-out-loud funny amongst the contempt and chaos he brings. Ifeanyi Felukwu as Jimmy is the adverse, effortlessly naturalistic and believable, although this casualness at times renders him difficult to hear, with some lines too muttered and rushed to make out. Finally, Zac Patterson does a great job asserting his character in the second act; a tricky feat given his first half absence. His hesitant twitches and genuinely pained grimaces effectively illustrate Geoff’s benign intention and strong fibre but ultimate inability to make a difference.

Set (primarily composed of the table, sofa and bed, with another table half off stage to allow for greater movement and onstage privacy) was effective considering the space, allowing for naturalistic blocking and intimate character interaction whilst establishing the atmosphere well. Tech was fittingly minimalist but well executed by Henry Flack and the team, with the use of the radio throughout particularly effective in generating atmosphere and setting, though some sound cues were a little late in some places and sudden in others. None of that detracted from the performance in any significant way though, allowing Green Door’s Taste of Honey to shine as the gripping and tragic character drama it thrives as.