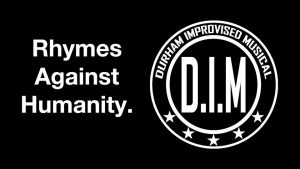 DIM does St. Patrick’s Day: A Sham-rockin’ Special was a show which was funny and entertaining in equal measure. Durham Improvised Musical displayed their versatility in performance, and ability to think on their feet in ridiculous circumstances. The word most appropriate for this performance is coherent. The five-strong cast, pianist, and technical director stayed on the same wave-length throughout, as cogs in their improvised musical machine.

The show’s title, setting, and a single song title were decided by the audience at the start. It ended up being “My mother is a Leprechaun”, drawing from both St. Patricks Day and Mother’s Day. The setting chosen was a potato factory (of course), and, despite my worries, did not veer into an hour-long bout of Irish stereotypes. The material, rather, was used in an imaginative way –the main plot being (kind of) about finding the “one potato to rule them all”.

The songs were, of course, the best parts of the show. Rhys Rodrigues on piano underpinned this success with his quick-fire improvisations on the piano, impressive in how distinct they were from each other.  The cast improvising their songs over this proved to be the icing on the cake. Not only did they create hilarious songs about life in a potato factory, but they did it with style and an assured demeanour. It was easy for them to break into ensemble numbers in full harmony at a moment’s notice.

They also managed to make something interesting out of the audience suggested song “Don’t Touch my Scrotum”, in which Rosie Weston’s character’s idea of true love was being able to… touch someone’s scrotum. It was a difficult song to fit in to a musical about potatoes; nevertheless, they managed it. Lines such as “true love will transcend, If I can just touch your bellend”, even managed to bring the actors into fits of laughter.

The technical director, Helena Trebichavska, was engaged throughout as an active member of the improv happening on stage. With a limited set of lighting and sound effect cues, she enhanced the action happening on stage. Normally I would find issue for bad timing of sound effects, but the dissonance between Sam Baumal’s exaggerated mouth movement and the booming laugh sound made for a great comic moment.

As can be the case in improv, the actors were self-aware of the bizarre situations they acted themselves into. The comedy in the show was quite out there but never went too far. The Irish accents only started towards the second half, with Danny Booth commenting “I don’t know if I will be able to keep this up for the entire show”. In this case their closing proverb was apt:

“If we’ve learnt one lesson, it’s that we can’t do Irish accents.”