Review: A Night of Voices 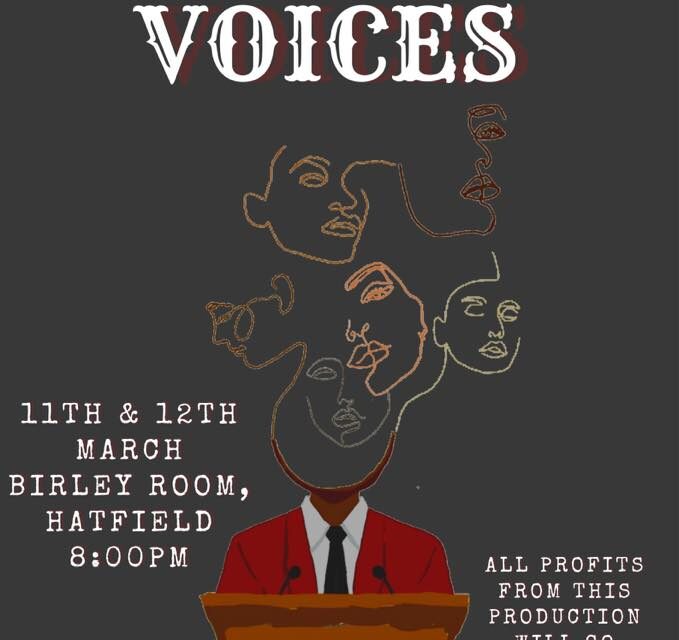 “A night of voices: a call to listen, be heard and tell your story”

The showcase opened with the beautifully poignant poem Awakening. The five actors rose from their chairs opposite the audience and stood as a united front, ready to call on the audience to join them in this plight to be heard.

The first monologue of the evening was performed by the beautifully expressionistic Hemontika Mazumder, her rendition of Julius Caesar showcased such complexity which came alive so perinatally through her imploring facial expressions, breathing life into Caesar’s thoughts. Her second monologue Caged Bird, written by Maya Angelou, in contrast was poetic, and her light physicality often followed that of the birds as she cried its song which she voiced purely and poignantly.

The second monologue was performed by the linguistical genius Yolan Noszkay, who’s poem My Mother(‘s)Tongue sang from her lips. Denisa Vitova’s writing deserved credit of the highest level, her poetic lyricisms flow like honey. Yolan’s second monologue also explored familial experiences, but this time, it was one of her grandmother’s. Yolan introduces her poem with such a warm, friendly yet unassuming tone but, as soon as she reads, her words fill her with a power and strength, and she physically stands taller and proud. Her words are generous and, both here and as a writer, she gives voices to those historically without.

The next monologue ‘Mona’ from Eight, was performed by the wonderfully compelling Ayana De Zoysa and written by Ella Hickson. Ayana’s confidence and self-assuredness radiated and really shone through in this piece. We could hear her mother’s voice which she painted in words so clearly and vividly. Ella’s storytelling also deserves praise, her words are so real we can picture and imagine this powerhouse of a woman. Ayana’s second monologue, also written by Ella, felt like a battle cry. In this monologue, she voices the narrative of so many young people who are desperate to change their world, but truly are at a loss of how. This desperation was voiced so truthfully and her concluding lines “I won’t be forgotten” were all too relatable.

The next monologue was performed by the wonderfully compelling Stephen Ledger. Opening with an infamous quote from Wilde’s ‘Importance of Being Ernest’ Stephen asked us, “If all women become like their mothers, what do men become?” Stephen not only captured the audiences’ thoughts and attention in this monologue but also our hearts. His words were stained with both a throbbing hurt but also a burning necessity to challenge and answer for the damaging elements of perceived masculinity. His monologue was also peppered with witticism, and in breaking the fourth wall on multiple occasions, we were compelled to reflect and be drawn to him. Stephen’s captivating writing, tone and physicality a collection rarely seen in DST.

Molly Knox’s monologue, Put the kettle On, was a vivid and heart-breaking exploration into the isolating nature of not being listened to. Molly took us on a journey with their voice, and their tonal shifts in the monologue deserve the highest praise. Their writing is powerful, and we truly see and feel with them. Molly’s pauses are a beautiful metaphor for this thundering science which thoughts follow.

Credit too must go to co-ordinator Tia Norris and Producer Chavi Chung who put together this excellent showcase of voices, a wonderfully encapsulating evening that is absolutely unmissable.

As the evening drew to a close, all five actors again rose for a final poem: Still I Rise written by Maya Angelou. In this concluding piece, I held so much admiration for all the actors and writers involved in the creation of this evening, their confidence, compulsion and most importantly, their honesty. Standing on stage, their overlapping words are a reminder that we are all different, yet all united.

My one wish for this piece that it that it becomes more than ‘A night of voices’ and these voices are carried into every creative piece of work in Durham.